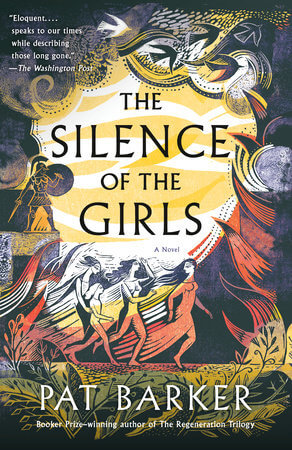 Another day, another retelling of the Trojan war. Reading this more or less concurrently with A Thousand Ships led to a certain amount of confusion over which author said which. Like Haynes, Barker seeks to lend a voice to the female experience of male-dominated narratives. The major difference is that while Haynes’ novel features a chorus of women from both sides of the combat, Barker focuses in on just one, Briseis. Best known for being subject of a squabble between Achilles and Agamemnon, Briseis goes from queen to ‘bed-girl’ and domestic servant over a matter of pages, giving her the perfect vantage point to observe the conflict’s final months. Interested more in what happened off the battlefield than on it, Barker’s novel takes an unflinching look at the price of war.

Although I had not read any of Barker’s other novels, I am aware that she is a veteran war-writer, with her Regeneration trilogy winning the Booker prize back in the mid 1990s. An early review of Barker’s work noted that you go to her less for the language than for the hard truths about human nature. There are plenty of hard truths to be had in The Silence of the Girls. We see the fall of the city Lyrnessus almost in slow-motion. I am not sure if Barker quite managed to capture the inner life of a noblewoman from ancient times, with anachronisms such as references to ‘half a crown’ but I did find her description of the battle to be incredibly evocative. It’s that sense of disconnect – this cannot be happening and yet it is. Briseis watches from the tower as her husband is killed and then they have only a few minutes before Nestor approaches and explains politely that they are all now the property of the Greeks.

Perhaps the most striking aspect of the story – and I suspect what drew Barker to the story is the first place – is just how little has changed about the rules of warfare down the millennia. The brutal conditions, the rapes, the senselessness of the violence. But more than that. The male deafness to female pain is eerily similar. Patroclus’ trophy woman Ismene helps organise his funeral games and is treated as almost his widow right up until the moment when she is handed off as a prize at the tournament’s end. When Briseis says to the men that she will see to Priam since she knows him, her sister being his daughter-in-law, they all stare at her in surprise, having forgotten her past life. In The Iliad, Andromache begs her husband to forsake his honour and to stay safe with her and their child. If he dies and the city falls, he knows that she will have to become someone’s concubine and their child will be slaughtered. That is exactly what happens but he ignores his wife’s horrific, awful grief and pain in favour of displaying his own physical courage. Similarly, Priam cannot bear to see his son Paris lose face and so he will not return Helen.

I was reminded very vividly of The New Mrs Clifton, which also presents the unpleasant female perspective on World War II. Not only has the titular character endured repeated rapes during the fall of Berlin, but her new sister-in-law is the widow of a British officer. Julia goes from being the popular wife of the commander to an unpleasant reminder of his death and is hustled off the base shortly after her husband’s death. I have read other similar accounts. The men fix their eyes on glory and honour and they avert their gaze from the women’s wails. Silence of the Girls packs its biggest emotional punch from the meeting between Priam and Achilles. Barker directly quotes  The Iliad with Priam saying ‘I do what no man before me has ever done, I kiss the hands of the man who killed my son‘. Watching him is Briseis who counters silently, ‘I do what countless women before me have been forced to do. I spread my legs for the man who killed my husband and my brothers‘. 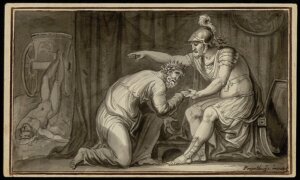 Priam’s plea to Achilles for Hector’s body is one of the iconic images of the Trojan war. Achilles’ gracious response is another such. Reading versions of the story in my own childhood, I had thought it very touching. But as with so many other ‘heartwarming’ tales from wars, it tells a lie. Priam is not the devoted father he appears here. He nods vaguely as he recognises Briseis in her slave state and mumbles sympathetically that it is ‘hard on the girls’ when the cities fall. When Briseis asks for him to take her with him, he asks her what the point would be. She would have a few weeks of freedom and then would be back to slavery when Troy inevitably falls too. Barker is emphasising that Priam knows that he cannot win this war. If he had cared a single jot for any of his daughters, he would have thrown Paris and Helen out the front door. But it makes little difference to Priam. He is killed quickly. The girls live on and suffer.

I found The Silence of the Girls to be a brutal read and at times excessively so. It is less the actual rapes as Barker slides over details. Achilles is not as violent than Briseis feared, ‘What can I say? He wasn’t cruel. I waited for it — expected it, even — but there was nothing like that, and at least it was soon over’. Agamemnon is worse but the moment of truest disgust comes when he is finished and then spits in her face. The unrelenting unpleasantness grated. I hit my personal pain threshold with Briseis’ description of the evening when she sees that one of the vilest Greeks is wearing a tunic that she had made for her father which had had ‘love in every stitch’. At this point it felt like the book had teetered a little too far into torture porn, with Barker spending too long dreaming up new and varied humiliations for her characters. The entire camp one big stinking latrine pit populated by malevolent Greeks with body odour issues.

Briseis felt quite blank as a protagonist and I struggled to connect with her. I can see that she is intended as the reader-surrogate but she just felt quite bland. I could imagine her in the inevitable adaptation played by a very beautiful actress taking long soulful gazes at the camera. There were certain aspects of her story that I really wondered at. In the opening pages when she is still queen, she exchanges uncomfortable glances with her slave-woman who is currently pregnant with Briseis’ husband’s child. Both women know that they will soon be in the same situation. Yet Briseis never engages with the fact that her husband has been raping this woman. She is quick to disdain the other women in the camp who have entered into proto-marriages with their captors but makes no effort to understand why these mental gymnastics might have taken place. Briseis always feels apart from her fellows. At times she even feels like a female character who is proudly ‘Not Like Other Gurls’ and goodness knows that there are enough of those out there. 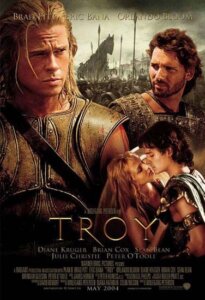 Yet despite these quibbles, The Silence of the Girls was incredibly thought-provoking. For the first time, I felt I could picture the lives of the women in captivity. When there is nowhere to run to, their movements can be surprisingly uninhibited. When there is no alternative, they submit without murmur to the men who killed all of their loved ones. As a child, I was frustrated by the silence of the girls, these female characters who might as well have been statues for the amount of agency they had within their own narrative. Now I can see that they had voices but none of the storytellers – all of them male – ever paid them any heed. Even in recent adaptations such as the lacklustre movie Troy, Brad Pitt’s Achilles was depicted as having a love story with Rose Byrne’s Briseis. This double erasure of their experience only makes the pain of what they endured more difficult to bear.

As the ships set sail for Greece, Briseis helps with two burials. One is for Astyanax, toddler son of Hector whose head has been bashed in. That child’s death has always haunted me and it has only gotten worse since I had a son myself. The other is Polyxena, sacrificed to be Achilles’ bride in the afterlife. The women look at her slit throat which gapes like another mouth but the girl of course is silent. These two seem very apt symbols of who ends up paying the price for war in any era. The Silence of the Girls is a commentary on warfare, depicting a conflict devoid of heroes which echoes into our own time.

4 thoughts on “Review: The Silence of the Girls, Pat Barker”