This book fulfills the ‘published in the year you were born’ obligation for my 2015 Reading Challenge – but really, I was long overdue for another Brother Cadfael mystery.  I have mentioned before that I am easily scared and gore really does not interest me in the slightest.  Increasingly, modern crime fiction seems to concentrate on progressively baroque incidents that really put the offensive into criminal offense, all of it solved using high-powered technology and borderline supernatural forensic techniques.  I am thinking here in particular of Criminal Minds, which my family enjoyed for the first two series but then the rising levels of sexual depravity put us off.  We were not alone – one of the show’s chief leads left it for the same reason.  It’s interesting to me therefore that people such as my own dear Dad are turning towards vintage crime.  Recently, Sophie Hannah wrote an Agatha Christie inspired Poirot story and many more are following her example.  More and more pieces of crime fiction are being set in the 1940s or even earlier.  If you like The Sweetness at the Bottom of the Pie, or The Railway Detective – remember, Ellis Peters was doing that whole vintage thing several decades ago.  Cadfael is crime fiction for people who don’t like crime. 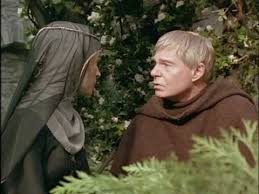 This is Cadfael’s thirteenth outing but given that I tend to read them in no particular order, I am not sure how far into the series I really am.  Oddly though, this was the only chronicle which I remember watching  on television.  I was roughly nine and tried to read it afterwards but gave up after only a few pages.  Still, the mists of time had made the ending slightly fuzzy so I didn’t feel like I was missing out on the suspense.  The plot revolves around wealthy widow Judith Perle – still only twenty-five, she is mourning her husband who passed away four years previously, the grief of which caused her to miscarry a much-wanted baby.  Mistress Perle has chosen to make a gift of the house she once shared with her husband to the abbey, requesting only one white rose a year as rent.  However, with the deadline for the rent approaching, it appears that someone is very keen for the contract to be defaulted upon, with first the rose bush being attacked and then Mistress Perle herself going missing.

Ellis Peters is a very gentle writer, the very sentences of her prose feel dainty.  Each book introduces where we are with the Stephen-Matilda conflict before zooming in to the action in Shrewsbury.  Although it may stretch credulity slightly that all these crimes could occur in such a relatively small town and that the person best-placed to investigate should be a monk who has sworn to a life in the cloister, but somehow it works.  Cadfael, as regular readers of the series are aware, is no ordinary monk.  He fought in the Crusades, knew the love of several good women, lived in the world and travelled it and finally, when he heard the call, he settled down to a life tending a herb garden.  He is no innocent, he knows his stuff and he should never have been played onscreen by David Jacobi.  Here he is called upon for life advice by the mournful Judith Perle, garden tips by people interested in the rose bush and then also a bit of the standard crime scene investigation with a sideline in footprint analysis.

The lovely thing about coming to a series as long as The Brother Cadfael Mysteries is that for the returning reader, there are so many recurring characters and in-jokes.  The Rose Rent takes place around the festival marking the translation of St Winifred, patron saint of the Abbey.  Hugh Berringar, local sheriff and Cadfael’s closest friend, slyly notes that not all is as it seems about that particular figure.  Sister Magdalena makes a welcome reappearance, having become something of a deus ex machina in her ability to assist Cadfael in sorting out issues of a delicate nature (ladies’ problems) – Sister Magdalena having made her first appearance as the mistress of a murder victim who chose the cloister because she was done with living in sin but wanted something with career progression opportunities.  Ellis Peters may look sweet and prim in the photos, but she has such grace for her characters – there are few sins which she is unwilling to forgive and even the most culpable characters are generally explained as having been weak or foolish or having got themselves into situations which overwhelmed them.  Nobody is ever wholly evil.

There is a particular unhappiness at the core of The Rose Rent however, with a strong woman being got at by all sides because her unmarried state makes her an anomaly in a world governed by strict rules.  Judith Perle is beholden to no man, she has neither husband nor father to order her but nobody is willing to let her be.  Peters contrasts her life as yet unfulfilled with that of Sister Magdalena who flourishes as a nun and thus hopes to expatiate her sin.  On the other hand there is Niall the bronzemith, widower with a child who he has not the time to care for but who longs for a life with a greater softness.  It may seem obvious that these two characters’ paths will converge but it makes it no less lovely when they do.  The Rose Rent is one of those editions of the series where Cadfael himself takes something of a back seat, stepping in only at crucial moments and holding his tongue when he thinks it wise.  For all that Cadfael may play by the social mores of medieval Britain, written by someone with borderline Victorian sensibilities, it is a pure comfort read.  While An Excellent Mystery was a hymn to love in all its forms, I think that The Rose Rent was more about finding a way back to contentment, discovering a way and a place of being.  There are few authors who write with such a holistic sense of kindness as Peters and as always, I finished The Rose Rent thinking that the world was a nicer place than I did before I started it.

Review: The Name of the Rose, Umberto Eco

One thought on “Review: The Rose Rent, Ellis Peters”