So, this week The Broke and Bookish are mulling over over-hyped books.  I started to write a post on it, then realised that it was not going to be news to regular readers that I don’t like Philippa Gregory and think that Twilight is a bit silly.  So I decided to re-think.  And I picked this instead.  At the beginning of the year, I read Mr Darcy and the Secret of Becoming a True Gentleman.  It was Austen fan-fiction which basically re-hashed Pride and Prejudice except Darcy trotted over to Meryton right after being refused by Elizabeth.  I am not entirely sure what the point of it was – the only real difference was that Lydia never ran off with Wickham but nobody really seemed to care about that one way or the other so … eh.  Anyway, further investigation revealed that it was simply the tip of the iceberg.  There are reams of reams of books re-writing Pride and Prejudice, stories where Elizabeth and Darcy fight crime, where Darcy is a sailor, where Elizabeth is a prostitute, where their genders have been switched.  The list goes on.  To be honest, I think P&P is as close to perfect as a novel gets.  But it did make me think.  If I were to sit down and write my own literary fan-fiction, what would I come up with?

1) The Woman in White, Wilkie Collins

Marian and Walter get married 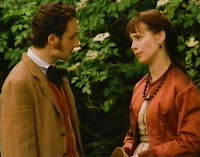 I couldn’t stand Laura Fairlie.  I don’t think it’s a good message that if you lollop around, take no responsibility and go out of your way to let people tear lumps out of you that you are somehow still magically guaranteed a Happy Ending.  In fact, Laura is such a ninny that her sister Marian spends the whole book translating everything that happens into simple one-syllable words so that Laura can understand.  This includes acting as intermediary between Laura and her husband.  I really liked Walter.  I really liked Marian.  They got on well, they respected each other – they seemed like a much more realistic couple. 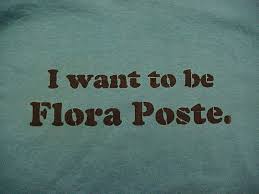 Jasper Fforde’s Thursday Next series sees Thursday book-jumping and generally solving problems throughout literature.  She’s not bad at it.  But Flora would have been a lot better.  She would have gone to Wuthering Heights, had a discreet word with Catherine about not being so silly, sent Isabella off for a decent haircut and to a nice party where she could meet someone who was not Heathcliff and probably signed Heathcliff up on the same trip she sent Aunt Ada on.  Other places for Flora to stop off on would be Verona (really, Juliet, faking your own death is the only way out of this?) and possibly Catch 22 because Flora would purse her lips and all of the silliness would just be over.  I adore Flora Poste, I aspire to be her – more Flora could only be a good thing.
3) Pamela, Samuel Richardson 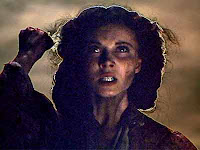 Pamela is a weird novel.  Creepy and weird.  Maybe it’s because this is also the first novel ever written.  Or maybe, just maybe, it’s because Pamela is a bland idiot who doesn’t seem like a real person.  Like Laura Fairlie, she just lies there and takes it when people abuse her.  This book would be so much better if Pamela was replaced by her ‘American cousin’ (these crop up all the time in fan fiction) Scarlett O’Hara.  She’d give Mr B what for.  A man might bother Scarlett once, but he would not get a chance to bother her twice, that’s for sure.  Scarlett parachuting in to Twilight or Fifty Shades of Grey would also work nicely. 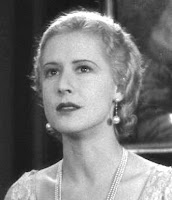 Elizabeth (a.k.a. The Bride of Frankenstein) just wanted to be happy, settle down, have a few kids etc.  Alas that she was betrothed as a toddler to Frankenstein, who lest we forget was not the Monster.  Except that he kind of was, because he preferred to spend his time reanimating a corpse rather than committing to the woman he claimed to love.  And then his weirdo corpse killed her.  Really, I think that Elizabeth deserves somebody nice.  Equally, Allan Woodcourt seemed like a good sort of chap.  And I never did trust Esther Summerson.  So.  I would let the two of them have some happiness together.  Esther might actually be able to fix Frankenstein – for all her claims to be not clever etc, she tended to see to the truth of people …

5) Swallows and Amazons versus the Pevensie children (Chronicles of Narnia) 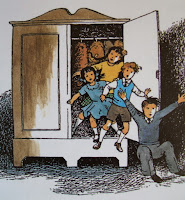 I’m sorry – I love both series but in the grand spirit of pirates versus ninjas etc, I would love to know which side would win in a fight.  Also, more to the point – are Susan Walker and Pevensie essentially the same character?  Both have skills with First Aid, tend to be stick-in-the-muds and have almost identical functions in the story.  But which team would come out on top?  On the one hand, the Pevensies had better weaponry, plus the ability to heal via Lucy’s special cordial but the Swallows and Amazons have Nancy.  I would back Team Ransome myself. 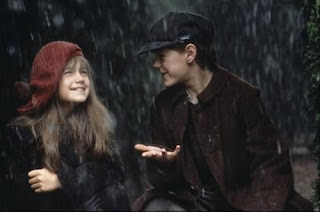 This one is more in the spirit of egalitarianism – as a child, I never really cared what the eventual fates of the characters were, I just wanted to play in the Secret Garden too.  Although to be honest, as a five year-old I did have a pretty hefty crush on Andrew Knott who played Dickon in the film.  What has annoyed me more though have been the subsequent film adaptations which all tended towards implying that Mary married Colin and that Dickon died in the war.  No.  Not fair and not implied by the novel.  So, to set the balance, I would write a version where Dickon Got The Girl because he was far nicer and plus, I think Mary liked him better and marrying Dickon would not be quasi-incestuous.

Oliver goes to work in Marlborough Mills (from North and South) 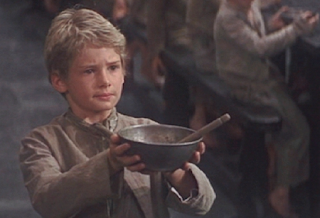 I try to be nice, I really do – but Oliver Twist is just annoying.  And worse than annoying, he’s small and annoying (Dickens spends way longer than he should do going on about how small the child is.  I was forced through that book as an undergraduate and I never understood what the supposed appeal of this child was and I never felt like he deserved his happy ending.  All he ever did was whine and look down his nose at people.  So, by all means improve his lot.  Send him to work for John Thornton in North and South, Marlborough Mills is an ethical and well-run establishment, but don’t make the kid an aristocrat.  He has no empathy for his fellow-man – he is not the kind of person to train up to be in charge.

8) The Tenant of Wildfell Hall, Anne Bronte and North and South, Elizabeth Gaskell 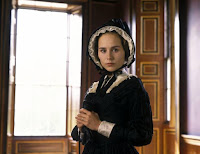 I love John Thornton – I love him more than Mr Darcy.  He is a good, rock solid Northern gentleman.  Without him, North and South would just be Margaret bumbling about and offending people with her patronising Southern holier-than-thou attitude.  He is awesome.  On the other hand, we have Helen Huntingdon who escaped an abusive marriage to the dreadful Arthur Huntingdon, but then promptly marries Gilbert Markham who also has issues with anger management (he beat up her brother).  Helen and John are both very driven and moral upstanding people.  John would be a good stepfather to Helen’s child.  They seem like a much better pairing.  So, my version would see John bounce back from Margaret’s first rejection and go off on a trip to Wildfell where he would meet Helen and being not-a-psycho, manage to win her heart without throwing temper tantrums but rather instead by behaving like an actual grown-up.  To celebrate the wedding, all the factory workers (including Oliver Twist) would get a slice of cake.  And then they all lived Happily Ever After. 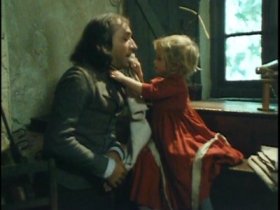 I was probably slightly too old for The Water Babies when I read it as a ten year-old.  It didn’t seem like a lovely fairy story but rather a dark and horrible surrealist nightmare from which there was no escape.  I still think it depicts one of the most horrific versions of the afterlife I have ever heard of – I can’t remember at what point I realised that in fact everybody’s dead but I was not impressed, particularly since I had grown fond of Tom.  I wished him a much better end than ending up in a strangely twee floral themed portrayal of eternity.  If I could write a new story with him in it, I would wish for him the safest place in the world for abandoned and unloved children – Silas Marner’s house.  I read that book with my Mum and although I have heard it unfairly abused as dull, I have such affection for it.  Silas Marner is a lonely man but on discovering little Eppie on his doorstep, he opens his hearth and heart to her and I have no doubt that he would do the same for Tom.  He is one of the finest parents in fiction.
10) Most of Victorian literature 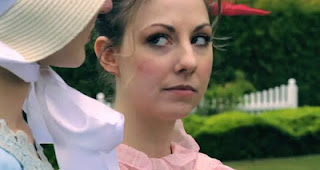 I’ve thought about this one for quite a long time.  There are so many wronged women within classic literature.  There’s Ada Clare from Bleak House, Lucy from The Mill on the Floss, even Jane from Pride and Prejudice to a certain degree, Lily Dale from The Small House in Allingdon – oh so many.  They are sweet and blonde and meek and mild and never do anybody any harm … and so they get walked all over.  I understand it, they’re the angel in the house, the victim.  However.  I would really like to see them get angry.  Perhaps they could be led by Esther Summerson – I kind of picture it being something like this.
Share this post ...
(Visited 443 times, 1 visits today)

Ten Characters To Invite To A Dinner Party