Viper Wine is one of those rare and astonishing novels that leaves one feeling slightly out of breath afterwards, as though one had been whirled about in and then set down feeling as though your perspective has shifted.  Kaleidoscopic in its scope and ambitious in the telling, this was a truly original historical novel which breathes extraordinary life and energy into a cast of characters who seem not so very far removed from ourselves.  Leading the pack are Sir Kenelm Digby and his wife, celebrated beauty Venetia Digby (nee Stanley).  Best known for her mysterious death, the novel opens with a copy of Venetia’s deathbed portrait and her husband’s words on her passing.  Yet this never feels like a book written about death, rather instead it concentrates on the notion of beauty and how far people are prepared to drive themselves in order to attain it.  The cover gives away what the novel’s trick is; the portrait of Venetia depicts her clutching an iPhone.  Expect the unexpected – or at least, the post-modern.
Britain in 1632 is a country hurtling towards Civil War, although the central players are of course unaware of this.  The King refuses to call Parliament and spends huge amounts of money on ornamental fountains, flattering portraits and elaborate masques and pageantry.  As with An Instance of the Fingerpost however, Eyre is clearly caught by this moment in history where superstition and science met in brief equipoise.  The New World is breathing into being, the old faith and the new are jarring against each other and people are coming to question things taken for granted for centuries.  Aside from this, Eyre’s style is at a far distant remove from that of Iain Pears and she goes to great lengths to emphasise how far people have remained the same, particularly in how the lives of the rich and famous fascinate those around them.  Sir Kenelm returns from his trip abroad and parries questions from Jeremy Paxman, Michael Parkinson and ‘a fool with weak ‘Rs’, Jonathan Ross.  His brain is double-hinged, going forwards as well as back, he unwraps Wagon Wheels at the breakfast table, he reads Java Script and he quotes everyone from Naomi Campbell to Neil Armstrong.  But while Kenelm dashes hither and thither, his wife’s step has lost its spring.  Venetia is a fading It-Girl, terrified of her own face and the ticking of the clock.

As a young woman, Venetia Digby was the muse of Ben Johnson and Van Dyck, the girl who had a whole colour (ultramarine) invented for her.  Now, she winces as her husband struggles to reassure her, to avoid saying that she is ‘still’ a beauty.  An aspiring scientist, Sir Kenelm refuses to make a potion to help his wife and so, like Faust, she seeks to make a pact with the Devil in order to regain her famous beauty, to hold on to her own idea of her self.  Venetia goes to the apothecary, the fabulously-named Lancelot Choice, and she purchases Viper Wine, the blood-red elixir which will restore her face, quicken her eyes and lend her back her youth.  The question of how far one will go for beauty is a central question of this novel, what the idea of beauty itself means to different people.  Like in Wolf Hall, the reader is invited to walk through the thoughts of the central characters but this is very much the electric rock to Mantel’s acoustic guitar.  We are shown the real portraits of these people, given snippets from their letters and biographies and contemporary accounts but truly, the moments of connection come in how they resemble ourselves. 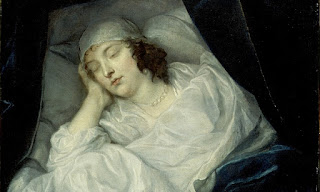 Some parts of the idea felt under-explored – there was a highly effective passage when the returned Kenelm is confused by the way in which all of the ladies at court appear to have his wife’s face.  (Venetia is not the only drinker of viper wine)  He stumbles, disorientated, unable to see which one is his own Venetia.  Not only does that recall the blank insipid faces crafted by plastic surgery in our own age, but also how portraits painted to flatter rob the sitters of their true selves – how many times have people remarked on how portraits of the Stuart ladies all look identical?  Each reflects that plump-faced aesthetic ideal, stripped of any distinguishing characteristic.  I felt that this would have been a particularly interesting point to make about a woman who was famously painted while dead.  Paintings of Charles I revealed him as a deity, angering many subjects who looked upon them since they knew that he was not.  Thus we see the rebellion against the king in how Cromwell requested his painting be ‘warts and all’ – this rejection of divine ideal, the tearing down of the crafted beauty and the attraction of the Puritan values.

Yet, this fails to do justice to what Eyre has achieved in Viper Wine.  She has shone a light on this forgotten corner of history, the starry tale of the Stuart Marilyn Monroe who burnt so brightly and whose death defeated her darling husband and seemed to mark the coming of the fall.  Venetia is a remote figure of legend to the peasant-girl Mary Tree, a friend and rival to her fellow ladies, an adored wife to Kenelm but it is never clear that she knew who she was to herself without the security of her own beauty.  Viper wine may have been a real beauty treatment but the image of the serpent is not a new one in terms of temptation to do wrong even when one knows that the consequences may be severe.  Even without the regular injections of modern references, this would have been a startling fresh look at Stuart history; Eyre’s descriptions of desire and the masks behind we hide shows us how the truths of human nature have remained constant over time.

Eyre’s voice is clearly present in how she directs her characters yet even at times when the pastiche is at its most obvious, such as when Inigo Jones tries to identify a series of painting, successfully spotting Van Gogh along the way, Eyre’s agenda never feels forced.  As Sir Kenelm describes his wife’s death for his sons, Eyre nips in and out to ask him whether he feels that this is appropriate reading for his children.  Earlier, she pops up in Sir Kenelm’s press conference to check whether or not he loved his wife.  It is fun to see her but otherwise I forgot she was there – this feels like a novel that has been fun to write and one against which it is difficult to level any complaint.  As a debut novel, it is truly dazzling and Hermione Eyre has proved herself an author well worth watching out for.