This one has sat on my shelf looking at me accusingly for months.  I received a free copy from Goodreads and then Christmas happened and so it has taken me five months to get around to it.  To be fair, I was always going to.  This is only the second Esther Freud novel which I have ever read but I’m not entirely sure why – I loved Hideous Kinky when I read it but somehow never got round to investigating her other work.  Mr Mac and Me is a significant departure from her first heavily autobiographical novel and, focussing instead on Charles Rennie Maclintosh and that curious incident in the artist’s life when he came to be imprisoned for two days on suspicion of being an enemy spy during World War One.

The novel is narrated by twelve year-old Thomas Maggs, a young boy who is sole surviving son to the local publican; Thomas has two elder sisters with concerns of their own and a cluster of brothers who died in infancy up in the local cemetery.  Fact and fiction mix here as Charles Rennie Mackintosh and his wife Margaret Macdonald did indeed rent a house in the Surrey area, seeking somewhere where ‘Mac’ can recover from pneumonia and the ignominy of having been cast out of the Glaswegian art community.

Esther Freud is a sure-footed writer, constructing fluid and lyrical prose.  As with the nameless child at the centre of Hideous Kinky, Thomas is a convincing young narrator unpolluted by sentimentality or faux-naivete but at times it did feel as though his moments of realisation felt slightly forced.  The novel is at its most successful in describing the village in which Thomas lives, the call of the sea, the changing seasons, how Thomas’ mother’s sorrow lurks in her visits to her sons’ grave in the churchyard.  Making an interesting comparison to Mac, there is a sense of artistry at work as George Allard instructs Thomas in the art of weaving twine.  The passages describing Mackintosh’s background do not flow as well, as he relates his career history is large undigested chunks to a startled Thomas.  We are supposed to view these monologues as part of Mac’s depression but somehow it fails to convince that he would so unburden himself to a child.  In a similarly shaky plot device, Thomas and his elder sister steam open Mac’s letters to his wife out of curiousity at their relationship.  The words are very beautiful but our viewpoint feels odd and suspending disbelief becomes difficult. 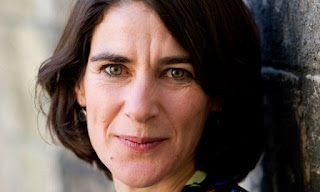 Having read Zeppelin Nights comparatively recently, it was interesting to read Freud’s depiction of the paranoia summoned up by the Defence Of The Realm Act (otherwise known as Dora).  Thomas frets over the German words he overhears and worries that repeating them will make him a traitor.  He is appalled to see someone smoke in the street, worries when the Zeppelin comes that he has done something amiss and will be blamed.  While it was interesting to discover more about Mr Mac – I have long thought his designs incredibly beautiful – I found myself more interested by the characters born of Freud’s own imagination than I was in those drawn from real life.  The part towards the conclusion when Thomas is lowered down the well to attach a rope to what has fallen down is truly haunting and made me feel that a far more affecting and much more streamlined novel could have been written without the Mackintoshes who seem to exist outside of the novel’s main action.

This is a gently written novel, easy in its treatment of all of its characters.  As with Hideous Kinky, it has a slightly muted feel even when events of high emotion are taking place.  Yet, with the advent of the centenary of World War One, it feels slightly gimmicky to note Thomas’ future longevity and project him into the future.  As a reader, I had grown accustomed to the dreamy young boy who draws ships and dreams of the sea – it feels strange to send him somewhere he did not belong.  I enjoyed Mr Mac and Me but felt it was a book that wore its research with a certain worthiness, which in turn meant that the story’s inner workings were laid bare, disappointing in an author whose work has in past been so seamless.

3 thoughts on “Review: Mr Mac and Me, Esther Freud”