My first thought on hearing the premise of this book was – is it too soon?  The basic premise of Look Who’s Back has Adolf Hitler waking up in the middle of Berlin in 2011 and while mocking Hitler has been going on for rather a long time (Charlie Chaplin started the trend off with The Great Dictator, a film he himself apparently later regretted) but the big difference with this book is that Germany is the one telling the jokes this time, or rather a German author at least.  Despite being overlooked by critics, this became a major best-seller in Germany and out now in paperback, the question is whether it can repeat its success in translation – is the English-speaking world ready to laugh at Germany laughing at Hitler?

A world away from Downfall (although closer kin to the bunker scene meme on Youtube), Look Who’s Back is a fish-out-of-water satire and a surprisingly insightful look at not only our own political culture but also how Hitler first came to power in the first place.  There were times when I did feel unsure about this rather cuddly portrayal of Hitler but ultimately, with the rise of political parties such as UKIP, this felt like a very timely look at extremist organisations and the celebritisation of politics. 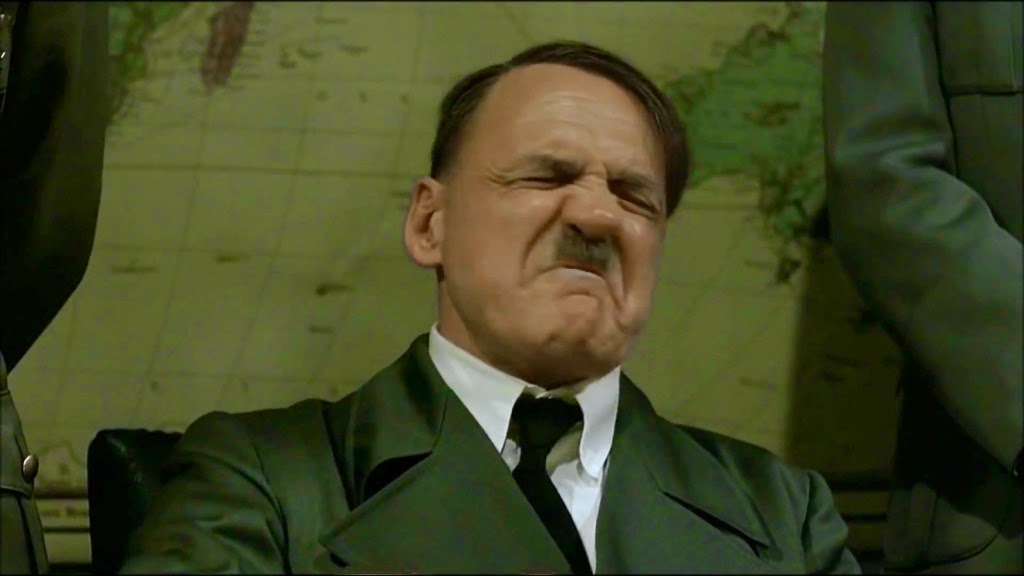 The book opens with Hitler’s musings on modern Germany and his surprise that despite his ‘very clear’ instructions, his orders for a scorched earth policy were not carried out.  The Volk should no longer exist and he finds it ‘rather difficult to comprehend’ that they are still here.  But then – he is still here too, and he ‘cannot understand that either.’  Vermes wisely never seeks to explain exactly how Hitler came to wake up on a piece of waste ground in Berlin, 2011.  With a vague memory of spending the evening with Eva Braun and of showing her his revolver, Hitler approaches a newspaper kiosk and is bewildered to discover his sixty year absence.  Again though, he wastes very little time pondering his situation, but instead seeks to make the best of it.  He befriends the vendor at the newspaper kiosk who assumes that he is an out-of-work actor who has been kicked out by his girlfriend – and impressed by Hitler’s very realistic impersonation of himself, the vendor seeks to get him an audition for a sketch show.  And so, Hitler hits the big time once again.

The joke is on the television executives as they seize upon Hitler’s rants as post-modernist gold – yet again, it is prescient given the media’s current obsession with pushing the boundaries of what is acceptable in the name of ‘comedy’ (yes, Frankie Boyle, looking at you).  Hitler rants away about modern life and the audience laughs along at the funny man and all his cantankerous charm but we the reader know that he is deadly serious.  Early on in the planning stages, one of the executives tells him very seriously that the Jews ‘are no laughing matter’ – meaning that they are off-limits as a topic but Hitler agrees with equal solemnity, believing that he has found a fellow anti-Semite.  Still though, I couldn’t help but think about how Nigel Farage has found favour by being pictured constantly with a pint and a big grin (in a poll to determine the trustworthiness of all the party leaders, Mr Farage was voted the one most people would ask to put up a shelf), and this along with a few well-timed appearances on Have I Got News For You seems to make people forget that he is a racist. 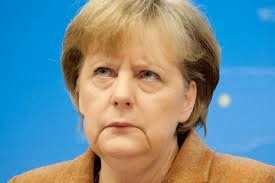 Still, many of Hitler’s observations on modern Germany are legitimately funny.  He is incandescent with rage when he discovers that after all the importance he placed on appearances, Helmut Kohl who ‘looked like Goring after a double-dose of barbiturates’ governed Germany for four years longer than Hitler had and that he did so in a cardigan.  He describes Angela Merkel as ‘a chunky woman with the confidence and charisma of a weeping willow’ and shudders that Goebbels would be spinning in his grave.  Hitler shakes his head at the modern Social Democrats, remarking that those from his own era may have been ‘unpatriotic fellows and blackguards but at least they were blackguards of stature.’  He stares in disbelief at Vladimir Putin, as if he thinks that his ‘policies look better without a shirt on,’ He is baffled by the point of the war in Afghanistan which is an ‘outright joke’ with no goal in mind and not enough troops to truly achieve anything.  From observing the world around him, Hitler realises that he simply has to get back into power – Germany clearly needs him.

Look Who’s Back reminded me a little of when I had to read Paradise Lost at university and was concerned to find myself having sympathy for the Devil character.  Hitler sees someone using a leaf-blower, something he sees as utterly pointless but he goes to congratulate them anyway for going about their task with such commitment despite its ridiculousness.  He is incredulous at the lunacy of the woman he sees collecting her dog’s excrement and putting it in a bag – and other people sympathetically ignore it, has the whole world gone mad?  He is amazed though by the Internet, that ‘charitable campaign for knowledge’ although he is aghast to discover his own name has been taken when he attempts to register for an email address.  Hitler is also truly impressed by the masterful propaganda-management fed through the news, particularly the rolling banner headline near the bottom of the screen which encourages the viewer to disregard the newsreader and to dismiss the news as pointless.  My personal favourite though was when Hitler was sent a ‘military problem’ and spent three and a half hours ‘engaged in a naval exercise by the name of “Minesweeper”.

The problem with this book though was the fact that the Jews really are no laughing matter.  Hitler is terribly fond of his assistant despite her tendency towards heavy make-up but she threatens to resign due to her Jewish grandmother’s distress at Hitler’s routines.  Hitler manages to soothe the grandmother’s concerns by expressing his admiration for his assistant’s work but this still feels like an uncomfortable subject for comedy.  Hitler really could sweet talk people into things and it is hard to read about a Holocaust survivor being hoodwinked by the real Hitler.

Yet at the same time, it made me think of how numb we have become to the Holocaust.  Vermes’ Hitler points out that the endless descriptions of how ‘inhuman’ the Nazi policies were are redundant, ‘With a good tet the reader can think nothing else but “That was inhuman”.  Then, and only then, you see, he believes that he has come to this conclusion himself!”  This may be the theory of Nazi propaganda but it illustrates how separated we have become from the thought process which allowed the Holocaust to happen in the first place.  How else could a book like The Boy in Striped Pyjamas have been written, despite its offensive cutesification of one of the worst crimes against humanity in history?  Apparently, since as a society we had forgotten the real flesh-and-blood children who had been slaughtered by the Nazis, John Boyne felt it was necessary to make one up – as if otherwise the reader could not recognise that the concentration camps were bad places on their own.

Look Who’s Back was certainly a thought-provoking read – by placing Hitler in the middle of modern life, it rather hammered home quite how little things had changed.  From Marine Le Pen, Kim Jong Un, Putin, our own Nigel Farage – there are still leaders who cleave to destructive ideologies, the human race has not cast off hatred.  I remember reading that Tony Blair believed that the war in Iraq would be successful because Saddam Hussein was a ‘uniquely evil human being’ – unfortunately various other equally unpleasant characters have sprung up to fill the void.

Similarly, we remember Hitler as a villain – when I was a teacher, I even had to explain to my class that he was evil – but Downfall and Look Who’s Back remind us that there was another side to the man, the side that adored Goebbels’ children, who was kind to his secretary and who was intensely charismatic.  If we forget that, we forget what it was that the made the man truly dangerous in the first place.  I have a feeling that Look Who’s Back has a particular appeal for Germany (I have passed on a copy to my Teutophile father) but I am really glad to have read it.  Its high-energy prose is packed with truly funny one-liners and it takes a look at our modern culture from a very innovative angle … a book to look at with an open mind.