This book felt like a real treat – it is a wincing black comedy centred around two children who have decided in a very business-like way to commit murder.  Originally published in the early 1960s, this has a real vintage charm, reminiscent of A High Wind in Jamaica crossed with Hansel and Gretel, this is one of those truly original novels which almost defies categorisation – I felt rather gleeful while reading it, that I had stumbled across something really amazing.  It teeters rather tantalisingly along the tight-rope between horror and the absurd but comes out in the end as an at times splutteringly funny high-wired black comedy.

The novel opens with a ship beset by troubles, they appear to have a pair of demons aboard.  But that is not quite what has happened.  Ten year-old orphan Barnaby Gaunt has been sent on his holidays – with a name as fabulous as that, you just know that trouble is bound to follow him – and so has young Christie McNab – the two of them land up on a remote Canadian island, a place which has been ‘bled white’ via two world wars which claimed all but one of its young men.  The sole guilty survivor is Sergeant Albert Coulter, Mountie and general paragon of local detective-work and the unwilling object of the children’s adoration.

Barnaby has a ten million dollar inheritance coming his way at the age of twenty-one and a determination to behave inappropriately at all times.  Christie is packed full of her mother’s opinions and is used to being unwaveringly difficult.  Within a few days, the two of them have painted a local bull with polka-dots, caused the death of a budgie and shattered the panes of Lady Syddyns’ greenhouse.  After decades of nothing at all ever happening, the islanders have no real idea what to make of it all.  So they silently decide to just approve of Barnaby and Christie until the children’s behaviour start to match up to the islanders’ good opinion.  The Brookses swiftly claim Barnaby as for sake-keeping, stubbornly believing him to be the reincarnation of their deceased son, despite the fact that Barnaby’s tastes and opinions are in direct opposition to those of their darling Dickie.  While Dickie always did as he was told, said his prayers, apologised and bathed when instructed, Barnaby goes to bed ‘unshriven, unrepentant and unwashed’.  Further along the island, Christie is the responsibility of the goat lady, a friend of her mother’s, and the goat lady simply ignores Christie’s demands until they fade away.  It would all be very Enid Blyton if it were not for the edges of fear that sneak into Barnaby’s nastiness that suggest we are edging more towards The Turn of the Screw rather than The Famous Five. Sergeant Coulter is the sole voice of reason – he attempts to fix punishments, state boundaries and generally put to the children that their behaviour is wrong but this only earns him disapproving stares from his neighbours.  Besides, he is distrusted due to having surrendered while at war rather than being killed, thus blemishing the island’s otherwise perfect record of death.  The Brookses and the goat lady go Dutch on the new glass for Lady Syddyns’ greenhouse, the kindly Reverend Rice-Hope attempts to instal it and breaks every single pane and so … Sergeant Coulter has to pick up the bill for the second load of glass and put it all in himself.  The more he tries to curb the children’s wild behaviour, the more he finds himself having to do with them and the more they love him.

From in an inauspicious start trading vicious insults, Barnaby and Christie become firm friends.  So it is that Barnaby comes to confess his secret terror of his uncle – Uncle Silvester is no kindly parent-surrogate, but is instead a monster hell-bent on murdering Barnaby and claiming his inheritance.  I have to admit that Silvester is one of the most hilariously evil villains I have ever seen outside of the pantomime genre and he is all the more fun for it.  One can almost imagine him sauntering onto the stage twirling his exquisitely crafted moustache – he describes himself to the locals as a doting guardian but the reader is immediately signalled that the truth is otherwise; ‘”Maudie and I never had a family,” said Uncle sadly, “although we wanted one. So you see, Barnaby is doubly precious to me. I adore children.”  He did indeed. Several little girls to whom he had taken a fancy had vanished into thin air.’

While the adults tell Barnaby how lucky he is to have such an affectionate uncle, Barnaby divulges the truth to Christie – his uncle beats him when he is good, continually sends him to bed and then summons him back with inane remarks, tortures him via hypnotism and most diabolically of all, he even burnt Rupert!  Listening to this hysterical catalogue, Christie is unmoved.  There is only one solution available.  They will simply have to kill Uncle.  Seeing this as tremendously sensible advice, Barnaby readily agrees and in a dark satire on children’s adventure stories, the two of the set about trying to plan the killing, gambolling about the island and befriending local wildlife.  As they saunter about discussing how best they might get away with murder, they meet One-Ear the cougar. 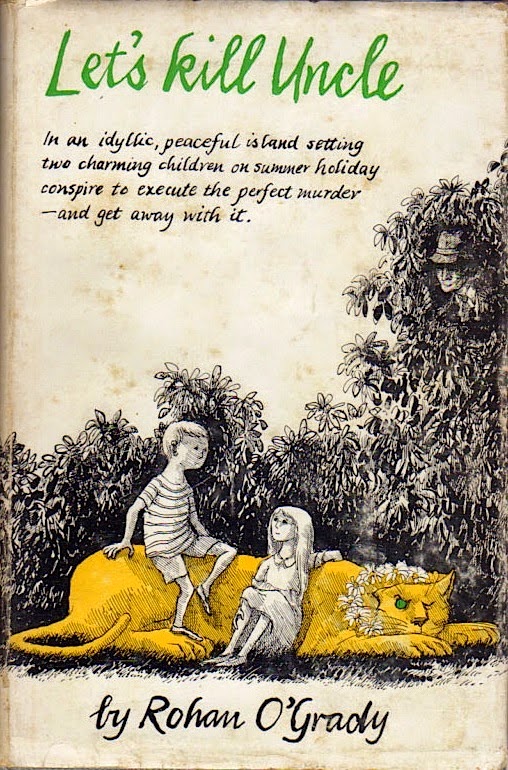 One-Ear was very nearly my favourite character in Let’s Kill Uncle.  If I hadn’t already written a Top Ten Tuesday on my memorable Animals in Fiction, then One-Ear would have been a dead-cert to have featured.  Very few authors could have pulled off so successfully a cougar struck with existential ennui over the stark choice between death by hunters or vegetarianism.  He has lost an ear, a claw and his happiness due to humans and so he bears miserably the attentions of Barnaby and Christie, knowing that if he hurts them, he will be killed.  So he has to grit his teeth as they cuddle and pet him, cheerfully convinced that he is little more than an oversized house-cat.  If they had not had the pesky barrier of belonging to two different species, really, One-Ear and Albert Coulter would have had a lot to bond over.

Albert might have seemed a two dimensional figure fixated only with the children’s behaviour, but instead O’Grady gives him an outlet via his daily letters to Mrs Rice-Hope, the vicar’s wife, a habit left over from their correspondence back when he was a prisoner-of-war.  He fell in love with her via her letters but she is kindly in her refusal to return his affections and so he writes to her of all his doings and then rips up each letter sadly and throws it in the sea.  Sergeant Coulter’s war-time traumas and on-going emotional torment contrast with the horror unfolding for Barnaby and Christie.

Sensibly given that this is more than anything a comedy, O’Grady never quite defines what it is that Uncle has been doing to Barnaby.  Still, Uncle is menacing enough as he begins to draw in his trap and it is uncomfortable to realise just how little these two children have to defend themselves with – in real life, even the pluckiest of youngsters stand little chance against those who would do them harm.  Yet, fate in the form of a deus ex machina of a cougar intervenes and ultimately Let’s Kill Uncle turns an about-course for a joyful resolution.  Yet, we have to have sympathy for poor Sergeant Coulter – with a final line to rival that of Some Like It Hot, O’Grady tips us the wink that poor Albert will never wriggle free of the children’s clutches.

I have to admit, I thought that this book was pitch-perfect.  I am a huge fan of black and white films and vintage comedy so this was very much up my alley – it was like a more intelligent (and far funnier) version of A Series Of Unfortunate Events with extra whimsy and an improved understanding of child psychology.  In essence it is a satire of a great deal of children’s fiction – Barnaby and Christie may believe that with a little training One-Eye will come to enjoy cinnamon buns but they are proved quite wrong.  Similarly, Albert ponders at length over which would be the gender-appropriate presents for each child but when they are reversed, both boy and girl go into ecstasy of delight.  As the summer ends and Barnaby and Christie leave the island, Sergeant Coulter stands amazed at how ‘the alchemy of the island’ has transformed them from two little ugly little brats to ‘magic children’, another standard trope of children’s fiction poked fun at since we know that neither child has any remorse for their dodgy dealing – like Emily of A High Wind In Jamaica, they have walked away scot-free.

I know this book was made into a film, with a title like this it was probably inevitable, but I will never watch it, I have such a clear picture of all that happened that I wouldn’t want anything to interfere.  I feel genuinely sad that I only have a library copy – Let’s Kill Uncle is a book that will certainly stick in the memory.

Review: How to be a Woman, Caitlin Moran