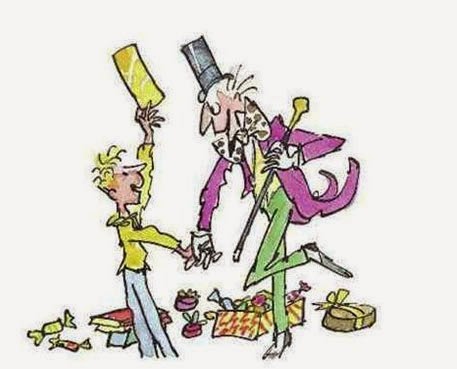 According to The Telegraph (so of course it must be true … er … right?) and Sainsburys, a survey has picked out fifty books that you apparently ought to have read by sixteen.  This sounds similar to the urban legend BBC Book Challenge (never actually circulated by the BBC) which stated that the average person read no more than six out of a possible hundred ‘great books’ – lists like these do the rounds every so often and I rarely agree with everything that is on them.  Anyway, now that I am no longer a teacher, one of the very few things that I miss is getting to dress up for World Book Day so this is my Instead Of post.  Anyway, I managed to score 41 here out of fifty, the books which I read are in bold and I have noted down the approximate age I was when I read them.  I do think that there are some classics that have been missed out here, I did my Top Ten Children’s Books last year and very few of those made the list  … I can feel another Top Ten Tuesday brewing … still, let me know how you did on this challenge in the comments below.

3. The Lion, the Witch and the Wardrobe – CS Lewis (aged seven)

8. A Bear Called Paddington – Michael Bond (about two, I remember I used to pretend to be him when I had a blue duffle coat which I grew out of aged three)

11. Harry Potter and the Philosopher’s Stone – J.K. Rowling (aged eleven when it came out)

14. Oliver Twist – Charles Dickens (aged twenty-two when I had to study it.  It wasn’t good)

15. Five on a Treasure Island – Enid Blyton (my mother banned Enid Blyton when I was little, I’ve never dared go against her edict)

16. The Wind in the Willows – Kenneth Grahame (aged seven)

21. Watership Down – Richard Adams (started with my Mum, we both got bored)

23. Harry Potter and the Deathly Hallows – JK Rowling (aged twenty, the day it came out)

24. Lord of the Flies – William Golding (got half way through, it’s just grim)

26. Great Expectations – Charles Dickens (aged eighteen, while studying at university, but I don’t think I would have enjoyed it much younger – I saw the 1940s film when I was about five)

31. The Wonderful Wizard of Oz – L Frank Baum (utterly obsessed with the film but oddly enough never managed to get through the book – for me Dorothy is just Judy Garland)

32. The Boy in the Striped Pyjamas – John Boyne (aged eighteen and frankly I think this book is just offensive and has no place on this list)

35. Green Eggs and Ham – Dr Seuss (aged twelve and I made up my own verses for weeks afterwards)

41. Where The Wild Things Are – Maurice Sendak (pre-memory, about four)

43. The Curious Incident of the Dog in the Night-Time – Mark Haddon (aged sixteen, just under the wire)

46. The Story of Doctor Dolittle – Hugh Lofting (started, found it a bit twee so switched to Professor Branestawm

47. The Story of Tracy Beaker – Jacqueline Wilson X (aged eight and I liked it then … no longer)

48. The Hunger Games – Suzanne Collins X (aged twenty-five and I don’t necessarily approve of it being read by younger children, it discusses sexual abuse and waxing off bodily hair)

50. Each Peach Pear Plum – Janet and Allan Ahlberg (aged nine to the little boys who I used to look after who are now all grown up!)

2 thoughts on “World Book Day: Top 50 Books You Must Read As a Child”