Another day, another piece of historical fiction.  Ho hum.  Sometimes I think that the tagline for this site should be ‘Reading bad historical fiction so that you don’t have to.’  I really need to stop doing that, it’s not as if I don’t have other things to read.  This time, rather than various members of the Houses of York or Lancaster flouncing about, Colin Falconer chooses to focus on Isabella of France, wife to Edward II.  Brief background: Isabella of France was posted off to England to marry Edward II when she was only twelve.  At the wedding, everything was embroidered with the initials of the happy couple.  The only problem was that the happy couple involved did not include Isabella.

Edward II and his ‘really good friend’ Piers Gaveston were the ones at the centre of the ceremony and while our own Diana may have complained about three people in her marriage, she really had nothing at all to complain about next to Isabella.  Despite all this, Isabella bore Edward four children, the eldest of which later became Edward III.  Then she finally got fed up of her husband’s behaviour, took off to France, had an affair with a baron, deposed Edward and put her son on the throne.  Even people who know very little about history are generally aware of Edward II’s supposed fate, his death via red hot poker is one of those facts that stand out in popular history.  In this novel, Falconer attempts to grant a voice to the infamous ‘She-Wolf of France’ who has lived so long in legend but unfortunately the result feels rather confused. 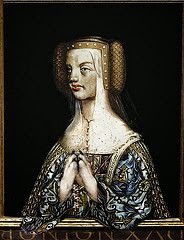 I felt that this might have worked better as a screenplay.  If this material was handed to a decent actress, she could probably make something out of Falconer’s rather blank prose.  Isabella starts out as the young girl who is desperate to win her husband’s affection and to obey her father’s commandment to love her husband.  Edward is handsome and kind but he is always happier digging a ditch or thatching a roof than thinking on kingly matters and he will always put the wishes of Gaveston over Isabella.  I felt that Falconer was trying to write Isabella as a kind of Daenaerys Targaryen figure – she starts out so meek and mild but over time she becomes a true Warrior Queen as her husband’s recklessness becomes too much.  The problem was that Isabella seemed lifeless for too much of the time to ever become a truly engaging character.

Falconer does explore some interesting points; the young Isabella battle for her husband’s affections but is unable to compete against the men in his life – yet when someone asks her if it would trouble her as much if her husband had a mistress, Isabella takes pause and concludes it would not.  A mistress would only have her husband’s attention in the bedroom but a male lover had the right to follow him everywhere, and so he was a threat to a wife in a way that a mistress would not be.  What has always struck me about Edward II is how even by the standards of his time he was a terrible husband.  Medieval men were not known for their uxoriousness or faithful behaviour but it was generally accepted that on public occasions, the wife was given the respect due to her.  Edward just loved Piers Gaveston and made no secret of it, even on his wedding day to Isabella.  It’s just bad form.  When Isabella finally fled from her husband’s persecution to France, she donned widow’s weeds to hammer home the point that she was not being treated like a wife.

At this point though, Falconer’s book turns into a weird kind of Fifty Shades of Grey.  Isabella has peeked out of the corner of her eye at Roger Mortimer all the way through the story and when she meets up with him while both exiled … well.  The Pants Are Coming Off.  To be fair, given that a running theme had been Isabella attempting to ‘inspire’ her husband Edward in the boudoir, I can see why Falconer wanted to make a thing about Isabella finally finding passion and also Isabella and Roger Mortimer really did have an affair.  It’s just so melodramatic – he sneaks into her room via the window, he slams her up against a wall, she is stunned and impressed by his erection (again, she has only ever slept with the gay Edward) and then the two of them are at it all over the room.  I don’t know, it’s a bit much.  I can see Falconer is going for the contrast between the courtly but distant Edward and the feral and passionate Mortimer but he never really seems to decide what Isabella and Mortimer’s relationship is supposed to be.  It is certainly not love.

The conclusion to the book was the strangest part of all – after Isabella’s constant refrain to herself that one day she would have Edward’s heart, when the time finally comes for Edward’s death, Falconer does not refer back to the famous fact that Isabella was buried holding Edward’s heart.  He even mentions that as a child, Isabella heard a prophecy that she would die of boredom and loneliness but then does not explore the fact that she and Mortimer were eventually deposed by her own son.  And then the epilogue is actually nothing to do with her but in fact refers back to Edward who has not been the focus of the book at all so it is hard to particularly care about his fate.  It was just … odd.  And not well thought out.  There was a lack of attention to detail – also evidenced by the fact that the cover to this book has a picture of a woman in Elizabethan dress on it – almost three hundred years too early but never mind.

Isabella did have its moments and it was a fairly quick and light read but this is not a book that I will treasure or look at again.  I felt it did try to present another viewpoint to the traditional view of the she-wolf but again it did not give her the edge that she clearly had in real life.  This is the woman who kept her daughter-in-law in penury and who had to be overthrown by her son before she would release power.  She was no innocent and yet Falconer cannot bring himself to put true blame at her door.  Ultimately, he is unable to truly do justice to a truly fascinating historical figure – despite promising moments, Isabella remains flat on the page.

I received a free copy of this book from Netgalley in exchange for an honest review.