Last week’s Top Ten Tuesday felt like a bit of a moan-athon so this week I decided to reach for a happy topic and so I came up with children’s illustrators.  There have been so many, many picture books that I have adored over years – a big reason why I am so excited that some of my friends have started having babies as this now gives me a legitimate excuse to buy them books.  I’ve tried to think not so much about individual books but rather about illustrators whose drawing style I admire – there are so many gifted artists in the world but it takes a very special person to be able to tell a story without using any words at all.
Raymond Briggs 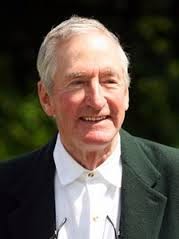 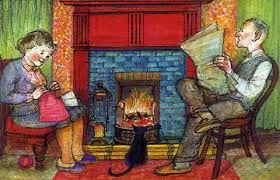 Most people fell in love with Briggs’ work because of The Snowman but for me it was Father Christmas and then later The Man.  Briggs has an ability to conjure up the domestic and blend it with the everyday – his own blend of magical realism.  The Snowman can chill himself nicely by the refrigerator, Father Christmas enjoys his whiskey, the Man stumps about demands food.  I like his use of colours and the way that he still manages to stir in that shade of melancholy that really help his stories to linger in the mind. 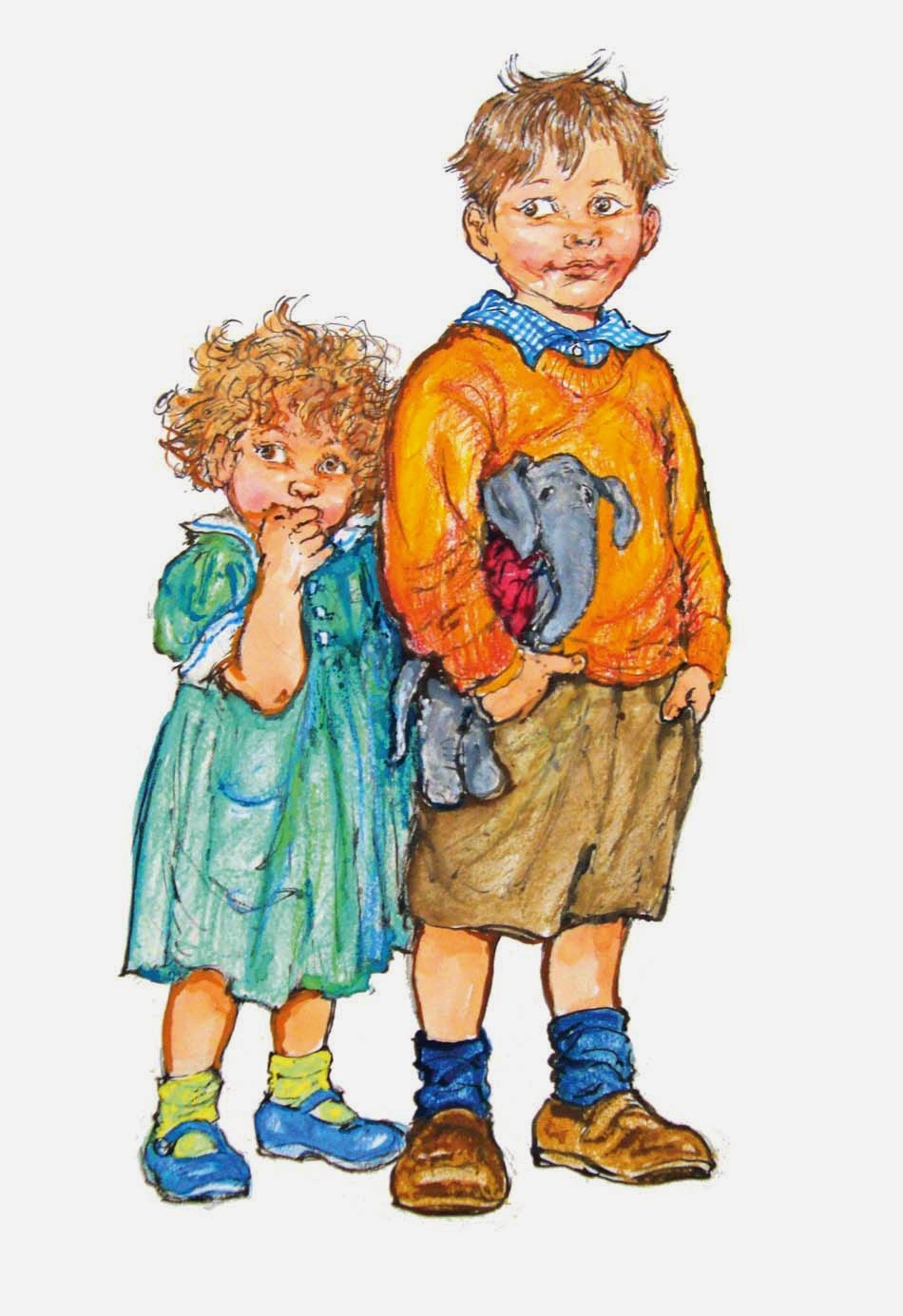 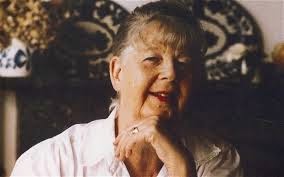 I once overheard a very dear and very bookish friend of the family dismiss Shirley Hughes as someone who constantly draws chubby-cheeked children and I felt almost personally insulted.  I have adored Shirley Hughes’ work since very early childhood reading the adventures of Lucy and Tom and Alfie and Annie Rose.  She gives her children such personality and humour and captures so much life in her drawings – these are not sickly-sweet cherubs but rather children busy about their lives.  Her drawings celebrate how a trip to the park can be an adventure, a rainy day an excitement and all of life’s everyday dramas. 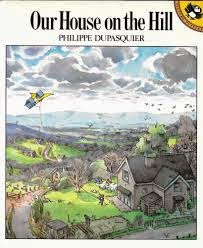 The House on the Hill was the one that clinches this one for me but I have also enjoyed his illustrations of some of Anne Fine’s work.  In some respects, his style reminds me of Nick Sharratt – but I do find Nick Sharratt’s cartoonish style rather over-rated and with Dupasuier, you could imagine stepping into the picture.  In fairness to Sharratt, he did keep me reading Jacqueline Wilson long after I had started to suspect just how shallow her stories were.  But Philippe Dupasuqier is in my view a distinct step up. 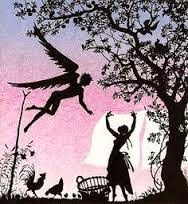 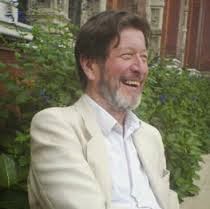 Jan Pienkowski is an amazing man – not only is he the fabulous brain behind Meg and Mog and several fairly frightening pop-up books, but he is also responsible for some of the most beautiful silhouette illustrations that I have ever seen.  The silhouetted form has become increasingly popular for cover-art but Pienkowski’s A Necklace of Raindrops and his spell-binding rendering of the Christmas story reveal him as one of the greatest illustrators of all time. 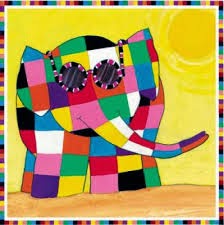 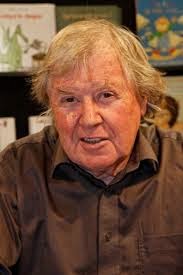 I used my Elmer the Elephant key-ring for nearly ten years until the hook wore through and it fell off.  I loved Elmer.  But I also loved Not Now, Bernard and several of McKee’s other books – his use of colour and shape are wonderful and his drawings convey so much emotion through apparently simple images. 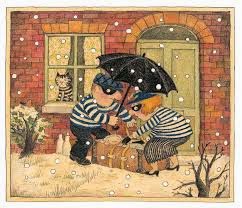 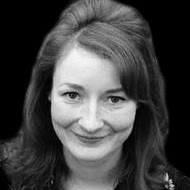 When I discovered that this lady had passed on, I felt a real jolt of grief.  I had a huge stock of Janet and Allan Ahlberg authored books as a child and even though I never owned Peepo, it remains one of my favourite childhood books.  Her drawings are so lively and incredibly detailed – from The Jolly Postman to the Happy Families series to Burglar Bill to Peepo and Each Peach Pear Plum – she is in my view the Jane Austen of illustrators, her images are fantastic yet it is easy to miss their greatness.  It is always worth looking twice at a Janet Ahlberg image, she usually sneaks in something for the eagle-eyed reader.  Still, what I love most about Ahlberg’s drawings is the warmth – her daughter now illustrates with Allan Ahlberg and there is a real feeling of a family business about the books. 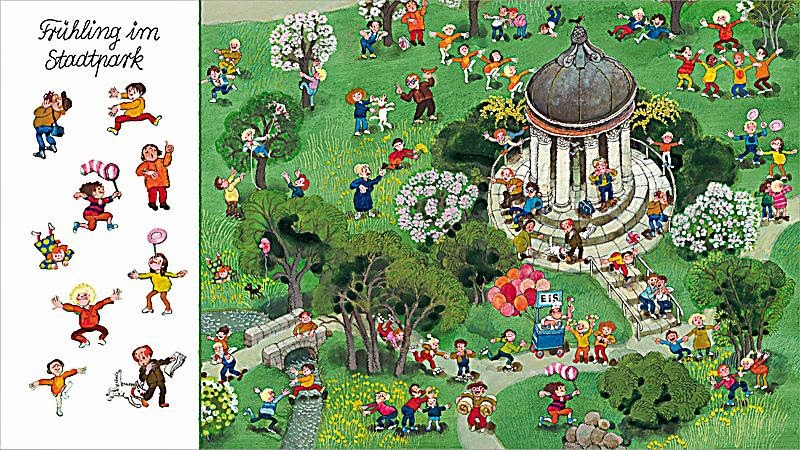 This one is a German illustrator, I was given one of his books when I was really tiny and I have gone back to it time and time again.  There are no words but there are so very many stories in his pictures – always so much happening and so much energy in whatever is going on.  Even now I still enjoy looking at Hier in den Bergen and imagining the scenes – he really draws you in. 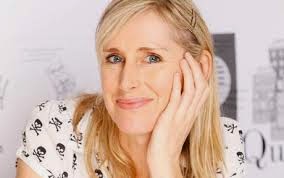 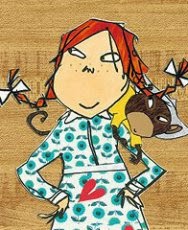 I have actually never read Charlie and Lola although I am aware that this is what Lauren Child is most famous for.  I do love the illustrations which she has provided for other books though and not just her pictures but what she does with text.  I had a copy of Pippi Longstocking which was sadly stolen from me last year but which was of great success in my previous incarnation as a primary school teacher – my seven year-olds used to have a rota over who was allowed to read it.  Strangely, we had another non-illustrated copy which lingered on the shelf unread.  It was Child’s drawings, which added a whole extra layer of high-spirits and verve to the story and this is what I have noticed in everything else I have seen of hers.  Child’s drawings always raise the story up a gear. 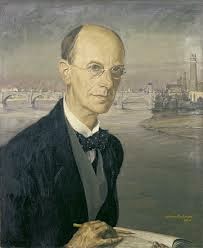 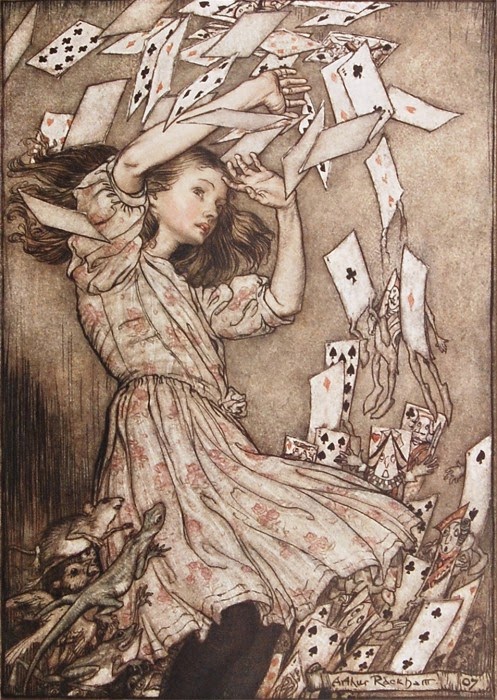 This feels like sacrilege but I have always preferred Arthur Rackham’s illustrations of Alice in Wonderland over Tenniel’s.  Somehow or other I feel like he captures more of the sense of foreboding and dread that makes Wonderland such a frightening place.  Tenniel’s version are more cartoonish – they almost feel more posed.  With Rackham, you get the impression of the chaos going on in the story.  His illustrations have an ethereal and almost ghostly feel – very appropriate given so many of them feature the supernatural!
Quentin Blake 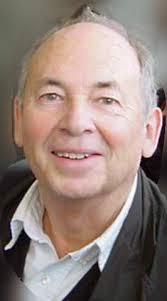 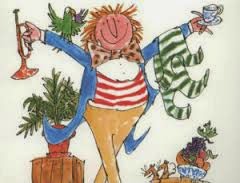 Ah Mr Blake – I think perhaps you are my favourite of all.  My Christmas cards this year were designed by you.  I have several of your drawings on my wall.  Quentin Blake had a long-running and highly effective partnership with Roald Dahl but he has had so much success outside of that – Our Village, Mr Magnolia, his collaborations with Joan Aiken, Michael Rosen etc, etc.  He uses colour exceptionally well and is able to convey so much of the characters’ personalities in the way in which he draws them.  His illustrations always seem as if they might just start moving – there is often so much fun and I just want to join in but he can also generate enormous pathos such as when he illustrated Michael Rosen’s Sad Book.  Basically, he’s amazing.
Edward Ardizzone 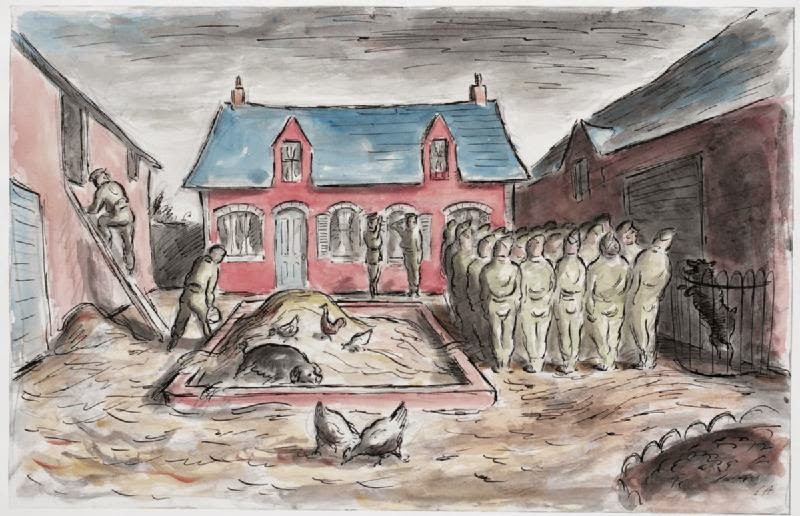 Having been familiar with the adventures of Little Tim and of course Ardizzone’s work with Stig of the Dump as well as several of Philippa Pearce’s books, I was surprised to discover while writing this list that Ardizzone was also an official War Artist during World War II.  His work is magnificent; he never over-dramatises but yet captures the atmosphere of a scene perfectly.  This is a man who can breathe life into a caveman, can conjure up a storm at sea but who can also the depict the darkest scenes of war.  Incredible.
E H Shephard 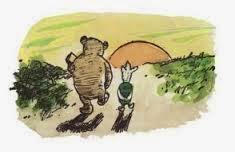 I almost forgot this one but really – how could I?  He illustrated Winnie the Pooh, The Wind in the Willows, The Secret Garden and oh so many more.  There is such a delicacy and a gentleness to his illustrations, something about them just conjures up a world of lovely picnics and sunny afternoons.  Other artists would have made the anthropomorphised animals seem twee but from Shephard they just seem real. The Disney-ified versions have their place but there is such actual beauty to E H Shephard’s work.  I’m a very long-term fan.

So – these are the ones who have stuck in my mind, does anybody have any others which I have forgotten?