Since the moment I first received my copy of Ballet Shoes on my seventh birthday, I have been a Noel Streatfeild fan.  It did not matter that I had no co-ordination or sense of rhythm, or even that I had a tendency towards being tone deaf – via the Fossil sisters, I experienced a life on the stage.  From there, I read White Boots, Curtain Up!, Thursday’s Child (this one as a bed-time book with my mother), Ballet Shoes for Anna, The Painted Garden, When The Sirens Wailed and more.  I remember reading Dancing Shoes while sitting next to my mother who was watching a rugby game and loudly cheering as New Zealand trounced England.  I completely ignored her, having very important matters to think about – I was reading a Noel Streatfeild book.  It was therefore with great sorrow that at the age of ten, I received the news from the nice Waterstones man that he was unable to locate a copy of The Growing Summer and so I had apparently read all of her books that were available.  I have made frequent revisits to Streatfeild since, but always with the feeling of returning to childhood – a happy, safe environment where things always work out in the end and there are iced buns for tea.  Next to all of these, Saplings was a big surprise.
The family at the centre of Saplings are the Wiltshires.  The family’s very name underlines just how British they are and we first meet them as they are enjoying a seaside holiday.  Laurel is the sturdy elder sister, Tony the wants-to-be-good son, then Kim the family attention-seeker and Tuesday, the baby.  All of these character types are familiar to fans of Streatfeild’s other novels.  Indeed, when I read her auto-biographical novel A Vicarage Family, I was intrigued as to how far she had borrowed traits from her fictionalised family members for the characters in her other books.  Certainly, there are certain stock characters who tend to crop up with a reassuring frequency.  The Nanny figures who appear to possess almost mythical powers.  The good sensible kind of manly men who have lots of sensible words of advice (Mr Simpson in Ballet Shoes, Sir William in Ballet Shoes for Anna, the lord who Lavinia worked for in Thursday’s Child etc), slightly cruel aunts, irritating younger relatives with play-acting abilities … Streatfeild was very, very good at drawing out certain types of characters so it is perhaps not surprising that she chose to re-use what worked.  Still, with Saplings, Streatfeild is doing something else. 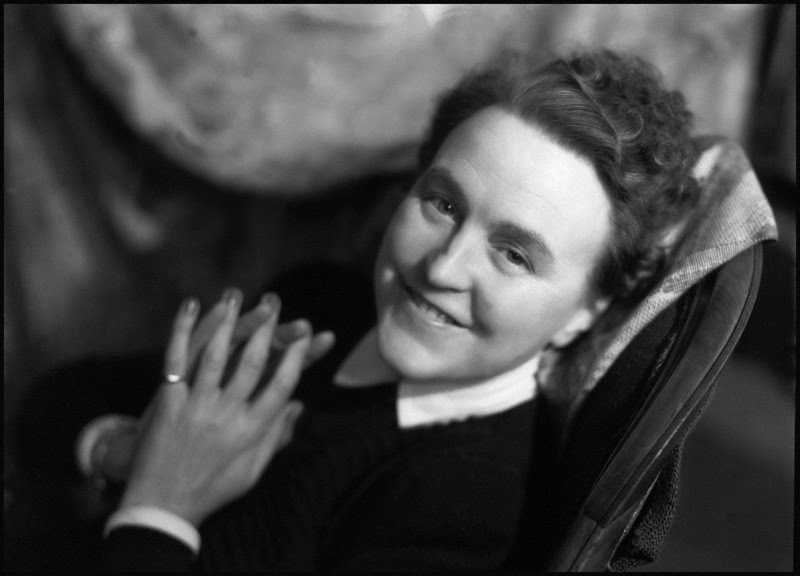 The Wiltshire children have been very carefully brought up.  Their father Alex adores them, puts their welfare first and considers carefully everything he says to them, wanting to teach them to be the best of themselves.  He worries for his younger son Kim who likes to over-dramatise.  The mother Lena is a more complex figure.  She is the beautiful glittering figure, she exists to be worshipped and sees herself as a wife first – motherhood comes a long way second.  In the background there are the far more practical figures of Miss Glover and Nannie, governess and nurse.  Everything is beautiful, the days are long and sunny, each of the children feels happy, safe and loved.  But it is the summer holidays of 1939 so it only serves to heighten the sense of dread.

Routines are instantly disrupted with the outbreak of war; the arrival of evacuees means that Laurel no longer has her own room at their grandparents’ house, she is also sent to boarding school rather than being educated by Miss Glover.  Tony worries terribly when one of his letters to his father goes unanswered.  Streatfeild seems at times to be playing against the stereotypes we expect from her fiction.  She always had a very keen eye for those problems that are so huge in the life of a child but which pass unnoticed by the adults who love them but in her children’s fiction, there are always understanding adults who will step in to solve everything.  In Saplings, Streatfeild exposes the lie of this as she steadily strips away every support available to the Wiltshire children and drags them through the agony of total war.  I read Blitz Kids last year which considered the fate of the children of World War Two and despite being a work of fiction, Saplings was written in 1945 and evokes vividly the mental landscape of war.

The death of their grandparents’ evacuees happens off-stage and goes almost unremarked – the adults believe that they have managed to to keep it from the children.  The reader knows differently.  In the special way that children can, the Wiltshires are all aware of what has happened to their companions and they are choosing to remain ignorant.  Albert and Ernie were loved too much by their mother who had to have them about her yet there is a real cruelty to how the Wiltshire family sigh over Mrs Parker’s foolishness, that she was going to live while the boys were killed outright.  Still, although the Wiltshire children can just about ignore their friends’ fate, their world is about to be blown apart quite literally by the loss of their father.

Alex’s death comes too soon, no warning, no preamble.  It just happens.  Even knowing that it was coming via the book’s blurb does not prepare – Alex was speaking to the children one page and then by the next he was dead.  Streatfeild really captures that awful gasping shock of such a sudden bereavement.  Alex has been the children’s world – his values are solid British values and with his defeat, the children are cast into an abrupt No Man’s Land where there is nobody to truly take care of them.  Promises are broken unwillingly, even those who truly care for the children are prevented by circumstances from intervening and those placid, happy children of 1939 become the anxious, sullen figures who are the despair of their family.  Laurel is removed from her beloved school, Tony starts passing out, Kim is more of an attention-seeker than ever and not even Streatfeild’s omnipotent Nannie figure can stop Tuesday’s bed-wetting.  Without ever seeming to labour the point, Streatfeild traces exactly how Laurel and Tony in particular struggle to feel noticed or understood and how the family becomes dangerously fragmented.

Physical desire is a persistent theme of the novel.  The pre-war Lena is open about her sexual attraction for her husband and as the Blitz begins, Alex notes that the bombing raids only excite her further.  Having lost him, her safe outlet for her desire is gone and so Lena becomes like a vacuum of need.  Drink, men – Lena is out of control.  Rather than the glittering figure to be admired at a distance, the cracks in Lena’s psyche are obvious to all.  Yet she is not the only one.  Laurel’s loneliness at school prompts her to feign an admirer and this does give a real insight into the mindset of the ‘good time girls’ of the 1940s.  Receiving letters and gum from a man means that Laurel finally receives the attention she has been craving for so long, that nobody has bothered to give her since her father died – if this is all that is available in a world where nothing makes sense any more, we realise that society is to be judged rather than the girl so lost that this meaningless notice is all she has.

Still on the other hand, the war opens up fresh options for certain characters.  Aunt Lindsey and Uncle John have had a satisfactory marriage where the novelist Lindsey took charge but the risks of war allow John to recognise Lindsey’s selfishness and that he himself wants more than she is prepared to give.  The Wiltshire children’s governess Ruth Glover steps out from the family’s shadow and via her work in the WVS, she has opportunities which would never have existed before.  Pre-war, she understood that Lena expected her to disappear into the shadows but now she begins to confront her own desires.  The rules that governed the middle class society which the Wiltshires belonged to have been suspended – yet as the novel concludes, the arrival of the Colonel does signal their return.

A quote from The Guardian on the cover remarks that Saplings ‘belongs in the Imperial War Museum alongside the gas masks and identity tags and all those sad letters home from London’s evacuees’ and I cannot help but agree.  The final line is from the Cockney housekeeper, rejoicing that the British children did not suffer as their European counterparts, here we see Streatfeild’s true point.  This is not a gentle story of adventure and personal discovery like the Shoes stories, this is a psychological investigation of the impact of wartime – it is a rather blistering put-down towards anybody who might dare imply that Britain did not suffer in the war simply because we were not occupied.  It is like an inverted In Which We Serve, as if Noel Coward had gone down with the ship and Celia Johnson had turned to drink.  Alex was the perfect husband, perfect father – he knew the war was coming even when everyone else was convinced peace would last.  The tragedy of his death was the tragedy suffered by a generation of children yet Streatfeild’s prose is always calm and without fuss.  I knew I would like Saplings but actually, I loved it – even as a child, I felt that I could trust Streatfeild as an author who understood children but with this novel, there was a sense that she not only understood them but that she was actually speaking for them in their distress.  Truly, this is a Book to Treasure.

This was a book picked from my Classics Club reading list – further recommendations appreciated!