Last year, I read Our Spoons Came From Woolworths.  It was startling.  I had been expecting a fairly sunny domestic comedy and it packed rather more of a sucker punch.  I mentally filed away Barbara Comyns as an author to explore further.  Naturally, it has taken me a little over a year to get round to doing so but I have finally read The Vet’s Daughter.  It unsettled me rather as Spoons did but in an entirely different way.  Rather than a tale of domestic horror and harrowing poverty, The Vet’s Daughter is a miniature Gothic fairy tale with a hefty helping of the unpleasant.  Alice is the titular vet’s daughter, child of a desperately cruel father and a weak and defeated mother.  This ought to be a Cinderella story, Alice’s story ought to start badly and then get better and end happily.  No matter what the foreword suggested, I found no triumph in this novel’s conclusion.

With Comyns, one never quite feels as though one has the narrator’s full attention.  Our Spoons Came From Woolworths‘ protagonist seemly mildly surprised at all the fuss and Alice is filled with such intense loneliness.  As The Vet’s Daughter opens, Alice is briefly accosted by a man whose wife has joined the Plymouth Brethren, for which she expresses her empty sympathy and then returns to the house.  Again, Comyns flexes her descriptive claws; Alice’s unhappy mother’s ‘bones were small and her shoulders sloped; her teen were not straight either; so, if she had been a dog, my father would have destroyed her’.  Her mother withers away, her father tries to have the undertaker measure her for the coffin while she is still alive.

There is so much unpleasantness in this book; Alice’s stepmother is vulgar, her father almost a caricature of cruelty and then there are frequent incidences of truly macabre violence.  Alice is attacked by a man her stepmother has tricked her into meeting, she is temporarily rescued by the kindly Mrs Churchill and the loyal locum vet Peebles and whisked away to be a companion to Peebles’ unhappy mother.  There again she encounters cruelty at the hands of the nasty couple who manage Mrs Peebles’ affairs.  And then there is the more mundane darkness of meeting the handsome Nicholas who teaches Alice to ice-skate, takes her out on a drive, invites her to tea and then abruptly takes up with someone else without warning or explanation.  The quiet devastation of this sits heavily on her shoulders, coupled with her natural desire to appear unruffled by it. 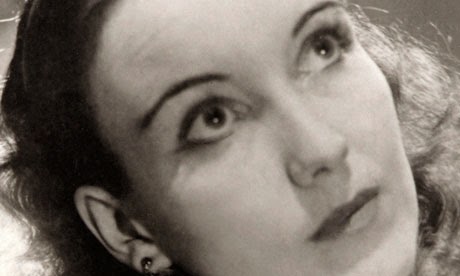 Alice never seems a victim, she is stoic and uncomplaining at what befalls her, self-contained and detached in her narration.  Indeed, she manages to achieve a kind of victory over Nicholas during their final meeting and there is a pragmatism to her growing realisation that only through Peebles (or Blinkers as she almost-affectionately calls him) can she be saved, even though she had initially rejected him.  In silent parallel, Alice’s friend the deaf and dumb Lucy also metamorphoses from good girl to fallen woman and we have a sense of these young women’s limited options.  As Alice loses her position with Mrs Peebles and is forced to return to her father, there is a real sense of despair – we know her father for a man teetering on the border of madness in his hatred for his late wife and their shared child.  This can only end in disaster.

This is a very little book – it finishes at 134 pages and I would say that the first 110 or so are spell-binding but I felt that Comyns bungled the final few chapters; the magical realism is beautifully done but somehow the conclusion lacks a certain impact.  When her father realises Alice’s secret talent, the way that she asks only if it is ‘peculiar’ irritated me.  There seemed so little resolution for the characters – surely something more could have been made of such a promising beginning.  Comyns’ writing remains so original and distinctive but it felt as though she had written Alice into a situation from which neither she nor Comyns could escape.  I will imagine my own ending but I will also keep on looking out for more Comyns.

One thought on “Review: The Vet’s Daughter, Barbara Comyns”