The Rosie Project soared into our hearts with the immortal words, “I may have found a solution to the Wife Problem” and perhaps it was inevitable that a sequel would be in the pipeline.  I have to admit though that I was surprised.  Most romantic comedies are content to let the couple walk off into the sunset hand in hand and indeed there are dire examples such as Grease 2 to serve as a warning for those who try to return to the scene of the crime.  Myself, I hate stories about on-off couples – I have given up on more than one television series when they broke up a couple I liked so I went into The Rosie Effect very much with my fingers crossed that it wouldn’t ruin a story that I had really loved.  Still, Don is such a very endearing character – it was lovely to see him again.

Like its predecessor, the opening line gives us a hefty hint about Don’s peculiarities – Orange juice was not scheduled for Fridays.  Don is quietly rejoicing in his marriage to Rosie, scheduling unscheduled time and using a coin to introduce an element of unpredictability to his foreplay methods.  Don continues his research on alcoholic mice, Rosie finishes up on her PhD and prepares to start her MD.  Twice a week, they go out and tend bar.  However, a great big surprise arrives in his life which is both unscheduled and unpredictable – Rosie is in the Family Way.

The big problem I had with the set-up was that Rosie had planned her pregnancy without consulting Don.  Given that during the final pages of The Rosie Project Don mentioned that he hoped that they would start a family soon, the deception seemed unnecessary and underhand.  I also just feel irritated when male authors insinuate that this is something that women do – as if they are shoplifting men’s sperm for their own nefarious ends.  Still, to be fair to Simsion it was clear in The Rosie Project that Rosie had issues of her own and her secrecy is not entirely out of character.  Still, as a narrative device, it immediately put the book on the back foot.  I could see though that it was the obvious direction for Simsion to take in this new instalment of Don’s adventures.  In the first volume, Simsion satirised twenty-first century methods of dating and this time he is taking a bemused pop at pregnancy and parenting.

Hysteria around pregnancy is at an all time high.  I have read about how in medieval times, water was unfit to drink so people only ever drank wine or beer meaning that women must have been drinking throughout their pregnancies with no ill effects.  Still, if a pregnant woman reaches for a glass these days, she gets glares from all sides.  Similarly, I have heard doctors state that the stress surrounding nicotine withdrawal can be at least as harmful to a foetus as smoking itself.  I have never smoked and my alcohol intake is fairly minimal but I don’t like the way that female bodies appear to become public property as soon as they get pregnant.  I was once with a pregnant friend in the supermarket when the cheese-monger refused to serve her unpasteurised cheese, despite my friend’s assurance that she had already produced three other healthy children all under the influence of cheese.  It is not surprising that Rosie got irritated very quickly when Don suggested a Standardised Meal System suitable for pregnancies.

Don’s instinctive reaction to fatherhood is rather panicked.  I was a little taken aback by the new inclusion of Don’s ‘fits’ – despite his previous tae-kwondo encounters with bouncers, it all seemed a bit unlikely.  Similarly I was also unable to suspend my disbelief concerning the feat of logical gymnastics which retconned the nature of Gene and Claudia’s relationship.  Indeed, I felt that Claudia had been rather the voice of reason who was rather missing from The Rosie Effect.  Instead, poor Don was belittled by social workers and rattled by his own wife’s frustrations and irritations.  He seems to spend most of the novel unable to do right for doing wrong. 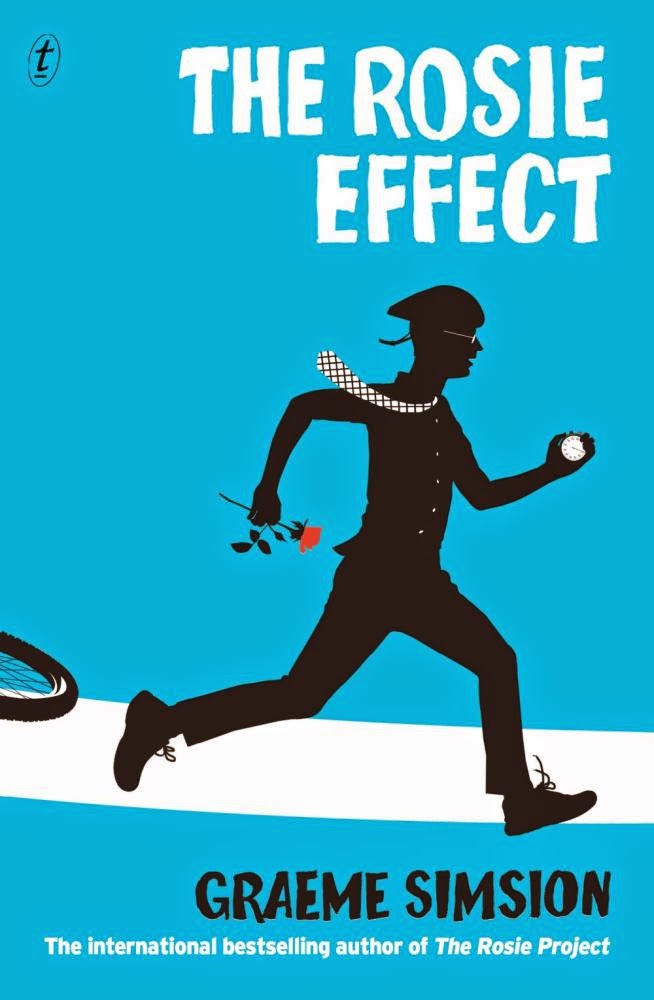 There were moments of the same high-spirited hilarity that made the first volume so enjoyable, such as when Gene advised Don to watch children to understand them better.  Don naturally goes to observe children in their natural environment (the playground) much to the consternation of the local law enforcement officials.  He is drawn in as an objective control figure to a study run into families with two mothers, again bringing Don into contact with babies and also a whole new strata of society to annoy.  Further misunderstandings ensue when Don attempts to purchase a pram and a cot and other items ancillary to a new arrival.

Don always remains a true innocent; unwitting and with such good intentions and yet always blundering into social free-fall.  There were some lovely new characters in this novel such as the rock star from whom Don and Rosie wind up renting their beer cellar (don’t ask) and the refrigerator engineer and his wife and the psychology professor, although some of them seemed a little too keen to join in with Don’s more outlandish schemes.  Mr Tillman really does come across as a lovely friend to have – his insistence on scheduling regular boys’ nights is truly appreciated by those whom he has befriended and he goes to great lengths to ensure the happiness of those he cares about.  His wife though seems determined to misunderstand him which seemed odd given that Rosie had done so well with him in the first volume.

It was truly touching though how Don’s friends appeared to rally around to support him when things appeared about to go disastrously wrong.  However, it was sometimes jarring how Don could go from utter social ineptitude to borderline supernatural emotional empathy in just a matter of pages – particularly the scene where he neglected to go to Rosie’s sonogram.  Don was a scientist, there was no way that he would not have been interested to see it.  The sad fact was that this time around, Don was not so seamless a creation.  I finished The Rosie Effect with a feeling of satisfaction that ‘all was well’ (it is not the kind of series where any other conclusion was possible) but also wanting to lay a gentle hand on Rosie’s shoulder and whisper, “You need to go easier on him, my girl.”

It seems inevitable that there will be a third volume in the series but I find myself hoping that there will not be.  It was interesting to contrast this novel with Us which I also read this week.  David Nicholls writes in a far more down-beat way and we know that the central couple will part but Graeme Simsion is writing something which is far more high-wired.  The final chapters were a fairly clear homage to George Bailey’s salvation in It’s A Wonderful Life, Don Tillman himself is martial- artist research scientist who can dance – this is the literary equivalent of The Big Bang Theory.  This is not a book which is heavy on realism so it seems a shame that its sequel should feel lacking in kindness.