I went straight to this book after finishing Trinity because I needed a real change of pace but felt like staying in the same place.  More unusually for me, this one is from the library.  I get very attached to books and don’t like to have to give them back once I’m done – while at school, I once borrowed the same book three times from a classmate and inwardly felt very peeved that I couldn’t keep it.  I have been wanting to have a look at this for a while though, I read The Scandalous Duchess a few months ago and loved it.  It is so good to find an author of historical fiction who is not Philippa Gregory.  I have been making a real effort to steer clear of anything written by her ever since I found myself half-way through The White Princess without having realised how I got there.  I always feel irritated about the way Gregory portrays all Tudors as these hunched, ugly, rude, violent, humourless traitors but far worse than that is the way she writes her women.  They simper and giggle and become these ridiculous empty-headed fools who make idiotic decisions.  Having grown up in Yorkshire, I have always had an interest in Anne Neville but I am never going to read The Kingmaker’s Daughter … so I was grateful to find The Virgin Widow instead.
For the uninitiated, Anne Neville was the youngest daughter of the Earl of Warwick, known as ‘The Kingmaker’ due to his battle prowess on the Yorkist side.  However, Warwick was not content with his rewards for having put Edward IV on the throne, particularly when Edward wedded himself to Elizabeth Woodville.  So Warwick married his eldest daughter Isabel to Edward’s brother George of Clarence, without asking Edward.  Then he rose up in rebellion and tried to put Clarence on the throne.  Twice.  The second time, Edward got really cross and the family had to flee to France and beg for mercy from … Margaret of Anjou.  Yes, that Margaret of Anjou, the wife of the man Warwick had deposed in the first place.  With little other choice, Warwick married his other daughter Anne to Margaret of Anjou’s son Edward Prince of Wales and took an army back to England to fight for the Lancastrians but he was killed as was the rest of his army.  But then Anne Neville ended up getting married to Edward IV’s other brother Richard of Gloucester and controversially became Queen for a short time before her own premature death at twenty-nine.  A very busy life. 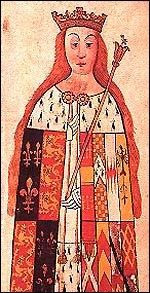 Review: The Name of the Rose, Umberto Eco