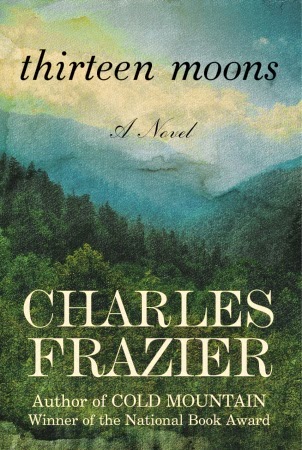 During Summer 2008, it was widely reported that several different books had been purchased for large advances by their publishers and then had had disappointing sales.  And not just slightly disappointing  – they had absolutely tanked.  One such was Thirteen Moons.  It is estimated that Random House made a loss of around $5 million.  For those who do not remember, Charles Frazier’s first novel was Cold Mountain, which was later made into a film starring Nicole Kidman and Jude Law and which netted Renee Zewelleger an Oscar for Best Supporting Actress.  Random House can be forgiven for having expecting great things from #2 and I even remember the promotional material – postcards in the independent cinema where I was university, posters in bus shelters.  Cold Mountain is one of my Books to Treasure but I also loved this one too.  I remember being on a train in France travelling to my summer job for that year and I was absolutely spell-bound.  The beautiful lyricism of the prose, the stunning landscape, the breath-taking scope of the novel itself – it was fantastic.  Perhaps it lacked the focussed narrative of Cold Mountain but Thirteen Moons has instead a powerful narrator who remains distinctive from twelve years-old right into his old age.  Perhaps this was just a case of unlucky thirteen?

More tweets and picks from other people can be found on Twitter and you can find my other Book A Day choices here!

Personality Test – Which Fictional Character is Most Like You?