Jacob’s Folly begins with one of the most bewitching opening paragraphs I can remember:
I, the being in question, having spent nearly three hundred years lost as a pomegranate pip in a lake of aspic, amnesiac, bodiless and comatose, a nugget of spirit but nothing else, found myself quickening, gaining form and weight and, finally, consciousness.  I did not remember dying, so my first thoughts were confused, and a little desperate.
With that, the reader is catapulted into the world of Jacob Cerf, 18th century pedlar and Jew, but he now finds himself suddenly in twenty-first century America.  Has he been reincarnated?  Is he a guardian angel?  An encounter with a mirror reveals the terrible truth.  Jacob has returned to the earth in the form of … a house fly.  Yes, Miller quite literally has a fly on the wall narrator.
The novel explores the conflict between conformity in one’s culture and the desire for personal expression.  Jacob had traipsed around 18th century Paris with his box of wares, always feeling an outsider in a country where he barely spoke the language and his life was governed by what he was not allowed to do.  While still a teenager, he was married off to a trembling and feeble-minded little girl Hodel, who is plagued by digestive distress, all of which served to compound Jacob’s woes and leads him into rebellion against his faith.  Finding himself in the twenty-first century, Jacob is still fixed in his desire to undermine the faith of others.  He is the devil on the shoulder, the voice whispering telling people to do what they please.  He is the buzzing fly in the room, distracting his subject from their better instincts.
The other two main characters are Leslie Senzatimore and Masha Edelman.  Leslie is a boat-builder with an in-built programming to help others, having been the man of the family since childhood.  Masha is a young Torah Jewish girl who harbours a secret wish to be an actress which is out of the question in her strict family.  There are obvious parallels between Jacob and Masha, their shared respiratory problems reflecting their artistic frustration, their family pressures, the strange powerful individuals whom they encounter along their journey.  Jacob is captivated by Masha from the first moment he sees her and nothing but the horrific discovery that he is a fly prevents him from vying for her heart.
The main strength of this novel comes in the characterisation.  Leslie’s wife’s impatience with her husband’s superhero complex is so well drawn as she seethes that he has adopted yet another stray cat.  The stench of Hodel’s bowels draws a real grimace from the reader.  Masha is the enigma, distrusted within her community for her apparent sensuality which they fear will make her a bad wife, then she has a further source of confusion concerning her faith as she steps outside her narrow world.  Each character is nimbly drawn without any feeling of heavy prose. 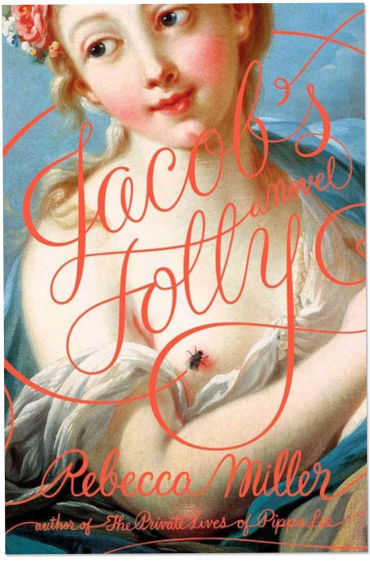 There are times when the conceit of Jacob’s narration faulters.  Although he is the omniscient over-seer, somehow his presence is not consistent so it feels sometimes surprising when he makes an aside to the reader who could have been forgiven for forgetting that he was there.  The passages detailing Jacob’s life story are vibrantly told and his wit and cynicism make him an entertaining narrator with just a whiff of the picaresque but the differing levels of narration jar slightly as Miller weaves them back together.  Comparing Jacob to Marcus Zusak’s narrator in The Book Thief, the Grim Reaper himself, one can see the difference.  Zusak’s Death is present in every line of the novel.  Jacob vanishes into the prose for pages at a time.
Still, this was a novel that fizzed with energy, exploring the idea of temptation within the twenty-first century.  How far was Jacob planting the seeds and how far did the temptation come from within?  The nature of belief is explored too, with a warmth given to its structures and routines even as it constricts the lives of its followers.  There are few villains in this novel and a wide host of lost souls, I was reminded at several juncture of A Visit from the Goon Squad.  Jacob and Masha are both actors, Leslie becomes plagued by his fantasies – what does it mean to live in a world of make-believe?  How does that compare to having faith?  In a world of uncertainty where people’s motives are so often opaque, what is there that we can irrefutably believe in?

Review: The Shock of the Fall, Nathan Filer