Of Bees and Mist is a difficult book to categorise, it shrugs away any attempt to truly define it in any one genre.  It is a sensual tale, not quite of the land of fairies nor that of the mortal men.  It combines elements of Chinese folklore, magical realism and a heavy dose of romance.  It begins with the theatrical line ‘Few in town agreed when the battle began‘, and so we are told that Eva and Meridia were mortal enemies in this story of family and love turned sour.  Meridia is the fairytale heroine although her life begins apparently quietly enough in Monarch Street.  Still, her family history seems to have stepped from Sleeping Beauty, with blue and yellow mists haunting her home since her infancy and a pair of parents who have been cursed apart by ice.
This is a fantasy novel for adults, taking the mundane tragedies of life and giving them a magical spin.  We watch Meridia grow from child to woman, a wife, a businesswoman, a mother but she is also pursued by forces unseen and her mother-in-law is diabolical in the truest sense of the word.  Meridia’s life follows the same pattern as ours; school, adolescence, adulthood and the search for independence but her journey to avoid the bees and the mist is spell-binding.  Setiawan has crafted a world that I did not want to leave.
Setiawan is from a Chinese background but is never clear about precisely where he is pitching his novel.  It is a mysterious harbour town where traders flit in and out, where the market teems with activity and jugglers and conjurers ply their trade, its geography is hazy and the laws are ill-defined but it is like a spiritual cousin to The Night Circus.  Meridia longs to escape her own dysfunctional home with her crone-like mother Ravenna and her glacier father Gabriel.  The passages where Gabriel verbally rips into his daughter were enough to raise a shudder, while the time Ravenna forgot Meridia at the market brought back a real sense of the vulnerability of childhood.  As a teenager, Meridia explores the magnificent town with her dear friend Hannah (who may or may not be imaginary) but then Hannah too vanishes.  Aged sixteen, Meridia meets the handsome Daniel at the festival and the two fall in love.
Probably the strongest element of this novel is the description.  Setiawan evokes the scents and odours of the town, the chill of the mists around Meridia’s home and the buzzing of the bees around Daniel’s.  I had very clear images of all of the characters, each was distinct from the next and at one point or another, Setiawan takes the time to humanise each one.  There are no bogey-men or women from fables, they are flesh and blood people and when they do wrong, they do so from their own selfishness.  Occasionally, the prose did seem slightly clunky with some odd phrases such as ‘in actuality’ which hampered the flow on occasion.  Still, this was a very evocative novel with a real emphasis on sensation, relying on that feeling of instinct.
Meridia was a young girl starved of affection, a bystander to her parents’ feud.  After her nurse was cruelly dismissed, she is cast adrift and it is not surprising that she hopes that her and Daniel’s love will give her the warmth and stability that she so craves.  After her wedding, she moves in with Daniel’s parents Elias and Eva and his two sisters, Malin and Permody.  Instantly, she is rendered a servant.  Again, this is another real dilemma, the wish to find independence from one’s parents has cast many young girls into the subservient role of wife.  Still, Eva is no mere strict mother-in-law, she has the power of the bees.  Machiavellian in her manipulations, Eva snatches Meridia’s wedding presents from her, castigates her to all who will listen and humiliates her before the world. 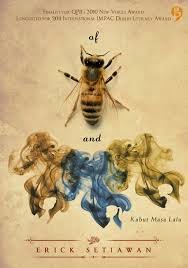 Eva is the narcissist, she wants everything for herself.  Meridia’s strong will and independent spirit has already survived the mists of her childhood but her battle against Eva is one that can only end with one survivor.  The nightmares of childbirth, the daily struggle for financial security, the mystical energy that surrounds each of them, these all factor in during Meridia’s fight for her marriage.  When she weds Daniel, Meridia is a child of sixteen full of love and adoration for her husband, idealising their future together.  But Daniel is just a boy, a nice boy and a handsome boy but a boy for all of that.  His realisation that he too must fight for his wife is a hard-found one and the question of whether he is the son first or the husband is one that wives have squabbled about with their mothers-in-law since time immemorial.  Still, what I perhaps appreciated most of all was that sense of family ties that bind, that those in our family by blood or by bond are irrefutable.  That they alter us is undeniable but we can choose to twist that to our own advantage if we wish.  That point is one that I will remember.
So many of the novel’s struggles exist in the real world too; infertility, caring for ill relatives, financial difficulties.  Still, Setiawan takes these cares and concerns and makes them into an epic battle.  I cannot remember the last time I read such an engaging heroine who had been written by a man.  Meridia maintains her integrity throughout without ever seeming priggish.  The moment when she saw her father kiss her baby son brought a real tear; it was a gesture that Gabriel had never given her.  She is a woman of grace, wit and intelligence and Of Bees and Mist was a beguiling and emotional novel.

3 thoughts on “Review: Of Bees and Mist, Erick Setiawan”