So … it’s Thursday but I’m doing my Top Ten Tuesday.  Oops.  When I looked at what The Broke and Bookish were doing this week, I found the heading intriguing so decided to join in belatedly.  I have loved books for as long as I can possibly remember and it was interesting to think about what have been the “Gateway Books” along the way.  It was actually very difficult to narrow it down to ten but these are the ones that I feel represented a ‘break through’.

I have searched in vain for the author, publication date or even the cover but alas all of those are lost.  This is the first book that I have a firm memory of but it is not the plot that has stuck in my mind but rather that I loved it and my mother hated it.  We had a second hand copy that had been given by a kindly friend of the family and it ‘mysteriously disappeared’ when we moved house when I was about four and a half.  In my pre-literate haze, I remember spending a lot of time trying to judge whether or not my mother was in a good enough mood to risk asking her to read it again.  Parents, there’s a lesson here – if you hate one of your child’s books, don’t let it show.  Just pretend.  You will only encourage them to think of that book as ‘the forbidden fruit’ and beg you to read it all the more.  Of course, the one thing that I do remember about Tubby and Tootsie is that it featured bears and I did have a general obsession with those; family, friends and passing strangers were constantly being begged to draw me bears to colour in, so that may have played a part too.  But still, the forbidden fruit thing. 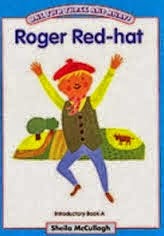 I must admit to having stolen this one from Vicki W but I too learnt to read from this scheme, so Roger Red-Hat, Billy Blue-Hat and Jennifer and Jonathan Yellow-Hat were old friends.  I have always had a good memory for stories, I was read to a lot at home before I started school and I remember expecting to know how to read after only a few weeks.  Of course, I was flummoxed by the fact that the name on my card and peg did not match the one that I had learnt (my mother called me by my nickname rather than my Sunday name) but also my life-long dyspraxia made things trickier.  I remember feeling very annoyed that I was not picking it up as quickly as the others, but I was determined and I got there in the end.  After that, there was no stopping me.

I reviewed this recently so will not go into lots of detail but this series was always very significant to me because it revealed a secret; not all stories are pretend.  When Laura’s sister Mary went blind, it was terrible and tragic and tear-jerking … and it was real.  There was no gulping it away as ‘just a story’ and aged six I knew that something awful had happened and there was no fixing it.

A fairly frequent memory from primary school is being asked to show the book that I was reading to strangers.  I had a pretty high reading age from about the age of six onwards, thanks mostly to how much my mother read with me.  We would read a book together and then I would reread it by myself, so I read Little Women in the Autumn term on Year 2.  I would be delighted to find a Year 4 child reading that where I am now, so I can see why my teachers were excited.  Still, there was always a certain amount of the ‘stabilisers’ in rereading something that I had Read With Mother which changed when I was given Ballet Shoes.  This was the first book that I ever started by myself and finished by myself.  I then reread it about three times before moving on to the next thing.  Still, it was a big moment.

Again, I have reviewed this in the recent past and I am not alone in thinking that it is amazing, still the reason for picking this one was that I read it aged nine.  I had watched the BBC adaptation and more or less rose to the challenge.  Rereading it again last year, I realised how much of the humour went over my head but for me the fact that I started it and finished it and felt that I had understood it was a massive achievement.  It made me feel that I could read anything I set my mind to.

Similarly to Ballet Shoes, this one represents a gateway in independent reading, this was the first ‘Grown Up’ book  that I bought and read by myself aged fifteen (with a little help from my wonderful godmother who provided the book vouchers).  My best friend studied this for A-level but I am glad that I did not, there is something about it that I just love so much and that I am glad that I never lost through over-examination.  Strangely, this was the book that made me certain that I wanted to study English at university.

Most people go for The Catcher in the Rye for their ‘teenage angst’ book, but this one was it for me.  You have a spooky plural third person narration, coupled with the ethereal Lisbon sisters who all take their own lives over the course of a year.  The Virgin Suicides captures the teenage dissatisfaction with life which strongly related to my own feelings at the time.  I raved about it to friends, none of whom had read it … alas that blogging was something that I had never heard of at the time.

I never studied a novel for my GCSEs, we had a poetry anthology instead.  I did however have to study The Color Purple for AS level.  With rape and incest from the very beginning, I seriously wondered if I could get to the end (I get extremely light-headed and then faint when things bother me).  This book took me far, far out of my comfort zone and I am so glad it did.  Because of The Color Purple, I had the courage to try new things and to read books that challenge my world view.

I always think of this book as the one that got me my degree.  I worked hard at university but experienced an unfortunate personal crisis the day before my first final exam, leaving me in a state of some panic about the remaining two.  Anyway, I pulled things together and when I saw my English tutor at graduation, she thanked me for my exam and said that she had enjoyed reading it.  I remember making parallels between the main character’s golf prowess and lack of sexual prowess and that his golf club was his ‘penis-surrogate’ and then feeling very clever and skipping home to tell my house-mate about it.  Basically, a book that prompts that kind of chat will get you where you need to go in an exam.

I was not wildly impressed by this book, the plot-holes got on my nerves and I found the narrator creepy and odd.  Still, it represents a big watershed for me because when I finished it, I made notes in the back about all of the things that I did not like and then still felt really irritated so I wrote my thoughts down in a Word document.  And so … Girl with her Head in a Book was born.  All because I took issue with The Thirteenth Tale and could not find anybody else who had read it.