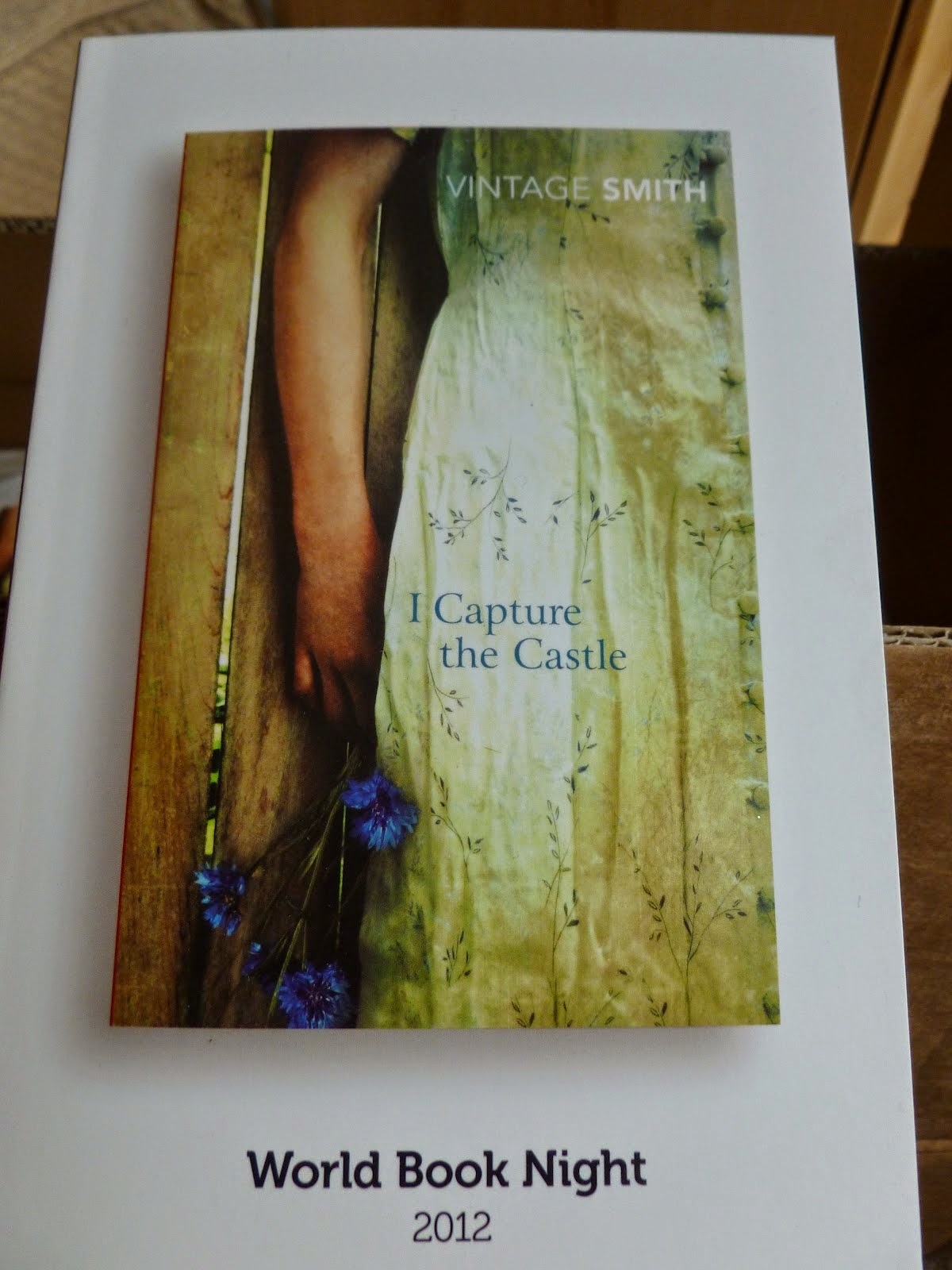 I found a World Book Day copy of I Capture The Castle and since my own one is somewhere in my parents’ attic (and may or may not have been destroyed by their builder), I was delighted with my discovery.  However.  Under the terms of World Book Day, one pledges to pass the book on after reading it.  To make things clear: I Do Not Give Away Books.  I will read and reread and I will purchase other copies as presents for friends and family but I give none away.  Leaving I Capture The Castle in a bus stop in Edinburgh felt like abandoning a friend.  I kept glancing back at it as I walked away and I did not see anybody pick it up.  If anyone did – bus stop, bridge, Edinburgh – take care of it.  Love it well.  It has had a long trip and it is a fantastic book.  I have realised again why I loathe giving them away.

I Capture the Castle is a Book to Treasure.  It has one of my favourite ever narrators, the bewitching Cassandra Mortmain.  Middle child in an eccentric, poverty-stricken family, the seventeen year-old Cassandra has left school and is practising her speed-writing by telling us all about her family.  From the very first line, ‘I write this sitting in the kitchen sink‘, we are plunged directly into her world.  Cassandra is with us every step, her voice is distinctive and consistent – she is timid, she is observant, she is naive, she is clumsy, she is honest – she is a teenage girl who is teetering on the brink of self-knowledge.  The local vicar describes her as a mix of ‘Jane Eyre and Becky Sharp, a thoroughly dangerous girl‘; Cassandra is just beginning to face up to her own desires and the realities of her situation.  Like most people, I first met Cassandra Mortmain when I was a teenager myself.  Ten years on (crumbs!), I have read far more fiction from that era and can appreciate I Capture the Castle not just as a wistful look-back at adolescence but also at the pre-war era.  Dodie Smith wrote this while in exile in America, she felt that she had missed out on something through escaping the Blitz and I Capture the Castle encompasses her homesickness and is a terribly British sort of story.

Cassandra’s father is a celebrated author who has not written anything in over a decade.  After a serious misunderstanding during Cassandra’s childhood which landed him in prison, Mortmain moved the entire family to Godsend Castle where he promptly succumbed to writer’s block.  Since then, the family has lost a mother and gained their naturist former artist’s model stepmother Topaz.  Cassandra’s younger brother is happy with his school work but her older sister Rose has reached a state of extreme desperation about their state of poverty.  With no measurable income and an ever-decreasing amount of saleable furniture, the family is struggling even to feed themselves.  When kindly local librarian Miss Marcy gently suggests that they economise by cutting the wages of their late housekeeper’s son Stephen, Cassandra cringes as she realises that they had never considered paying Stephen anything.  Not that he minded.  Things begin to look up though one evening when their American landlord Simon and his brother Neil get their car stuck in the lane … 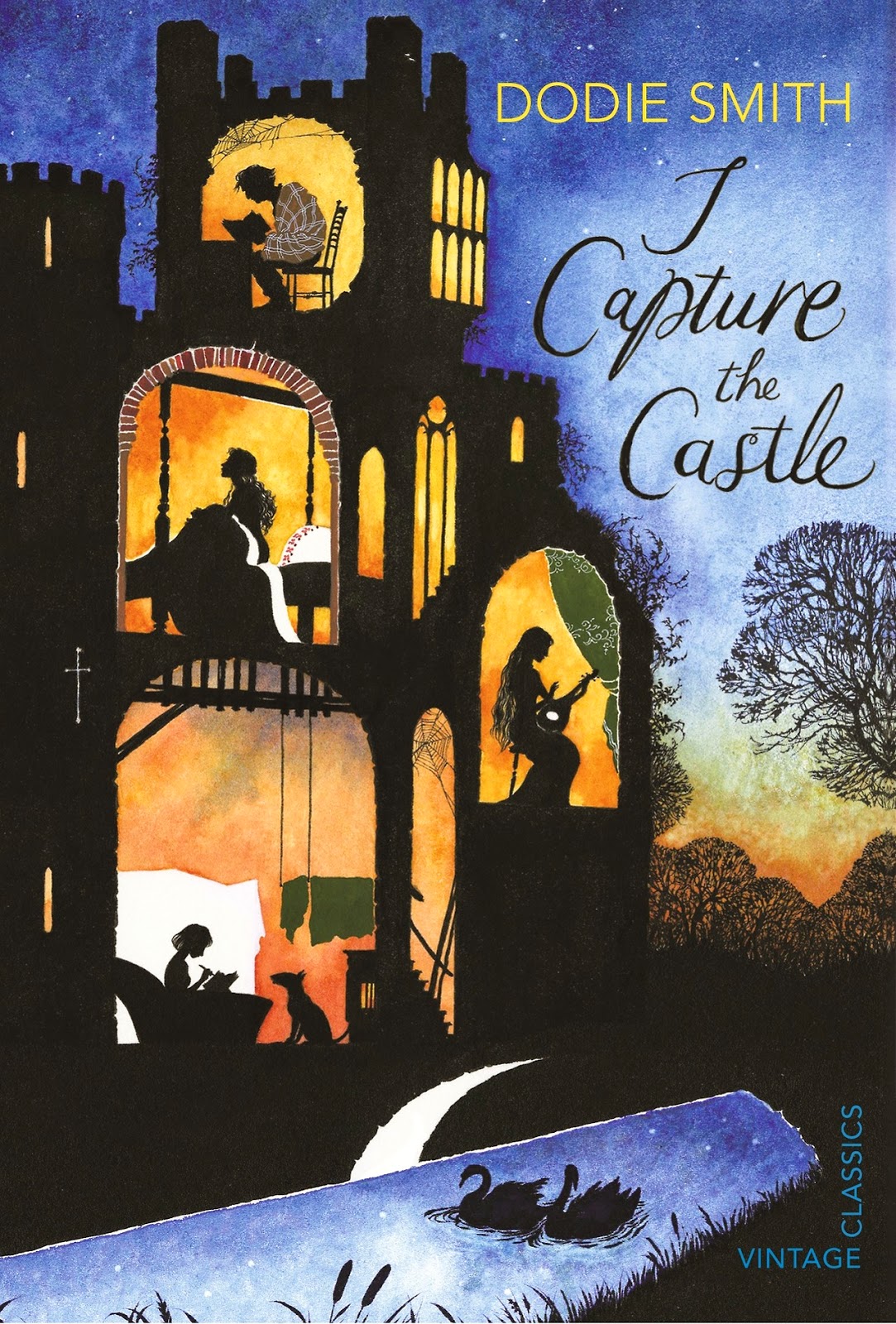 The truth universally acknowledged that a young man in possession of a good fortune being in want of a wife is embraced whole-heartedly by Rose.  While this could seem like a predictable plot development, Dodie Smith takes an entirely different angle.  Rose and Cassandra have read a great many Victorian novels but their marriage plot becomes a real plot as Cassandra realises that while Miss Elizabeth may only marry Darcy when she is sure that she loves him, Rose has no such scruples.  As a teenager, I was appalled by Rose’s mercenary motivations but on the reread I could see how dire her situation must have seemed.  With no education or qualifications to help her, she has no other escape from the castle other than marriage.  No wonder she wished on the devil.  The part when she justified herself to Cassandra, saying that she could not bring herself to go back to that soul-sucking poverty – I could not condone Rose’s behaviour but I did feel sympathy for her.

Cassandra herself goes through emotional turmoil as she herself falls in love for the first time.  After celebrating her Midsummer rites for what she realises will be the last time, she casts her garland into the moat and there is a real sense of Cassandra putting away childish things.  Myself, I have always been Team Stephen.  He has grown up with the family and adores Cassandra but he is also just a really lovely person.  He is the boy who makes sure that Cassandra has chocolate to eat while she has her bath.  He is the boy who makes sure that she gets home safely.  He is also the boy who will do whatever he can to make sure that she is happy, whether or not that is with him.  But, while for me it is so sad that Cassandra could not love him, it is also true to life; physical attraction is not everything and it would have been as wrong for Cassandra to pretend for Stephen as it was for Rose to pretend for Simon.

Cassandra’s ambition through her notebooks is to ‘capture’ her family and their life together, but she realises herself that words are not enough.  That very word ‘capture’ though implies that such understanding will not come easily.  It is this search for knowledge and self-expression, that ‘eternal search for our origins‘ that leads Cassandra into a state of turbulence and misery.  What is Cassandra truly trying to capture?  She goes to see the Vicar, is she looking for faith?  She visits Miss Marcy, who suggests that Cassandra try altruism.  The question of how we deal with our misfortunes is one that we have to face throughout our lives.  We can decide to distract ourselves, to seek fulfilment from other places, we can draw our eyes away from that which is denied, we can make do with compromised affection and pretend that this will make us happy – but as Cassandra realises on the final page, this is not enough. 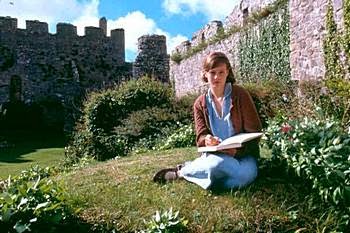 The mystery of what has stopped Cassandra’s father from writing threads throughout the book and psycho-analysis is suggested.  This knowledge of the self can be the most difficult thing to achieve.  How do we know if we are really being ‘ourselves’?  Recently, I took part in FutureLearn’s Theory of the Fictional Mind course – Cassandra is such a very well-rounded character, I feel as I would know her if I met her.  I have always sympathised with Cassandra as a fellow-dreamer, I too had a very active imaginary life and Cassandra’s journey to discover her true self, her own true feelings is one that I found highly recognisable.

Of course, the quality of Smith’s writing is what takes this book from a run-of-the-mill coming of age story to a literary classic.  There are so many truly fantastic incidents, like the episode with the bear and the train, then the part when Cassandra and Thomas lock their father in the tower in an effort to encourage him to write.  When Mortmain is rescued, Cassandra frets that they might have finally unhinged him what with ‘the state of his hinges being uncertain‘.  Cassandra may be a limited narrator, lacking awareness of the more adult desires of those around her, but her description is rich.  When Simon and Cassandra sit in the car and listen to Rose singing, one can picture it perfectly.  Cassandra may come to realise that she cannot truly capture those around her, but for a fictional character, she has a tremendous amount of life to her and Smith has captured her perfectly.

Review: We Are All Completely Beside Ourselves, Karen Joy Fowler

One thought on “Review: I Capture the Castle, Dodie Smith”