Katherine Swynford.  Katherine Swynford. Katherine Swynford.  A couple of years ago, I shared my thoughts on Katherine by Anya Seton and Alison Weir’s biography Katherine Swynford.  That post has got about a thousand more views than anything else I have written and is responsible for most of the traffic to my blog.  For such an intriguing figure, there is very little written about her, women’s history is notoriously difficult to track and Katherine Swynford had her own reasons for discretion.  Still, I have always been surprised that while other love stories from history are dramatised over and over again (The Other Boleyn Girl, The White Queen, The Tudors undsoweiter), Katherine Swynford and John of Gaunt are mainly known through Anya Seton’s 1950s novel.  Perhaps it is not surprising therefore that Anne O’Brien decided to write a historical romance of her own about the two of them… nonetheless, with all of the affection that exists for the original, it’s a very bold move.

I came to this novel with very low expectations.  I felt surprisingly indignant that another author had tried to ‘remake’ Katherine and The Scandalous Duchess‘ format was not designed to quell my concerns.  The cover features a model with an obviously twenty-first century blonde dye job and within the first three pages, I spotted three typos – dairy maids became diary maids, instead of poring over books, the Duke poured over them.  Additionally, all the way through, there was a problem with the typesetting for words containing the letter f.  So inflamed became inf lamed, fury became f ury and often the f was left on one line and the rest of the word on the other.  When reading a novel that is essentially a bodice ripper, it is surprisingly distracting.  Still, not too far in, I realised the true reason why I had picked up the book in the first place.  It was really good to read a book featuring John of Gaunt again. 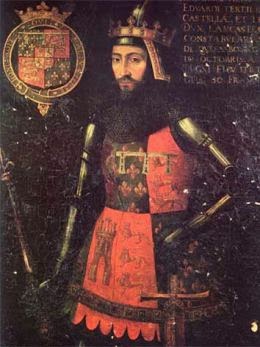 I am a self-confessed geek over history.  I am not even particularly selective concerning the period, I just like the stories.  It is always interesting to imagine the lives of these people – would the fact that they lived hundreds of years ago have made them truly different from us?  There are certain figures from history though whose stories dance no matter how long they have been in the ground.  John of Gaunt is one of these.  Despite holding the title of King of Castile, he never truly sat on a throne and yet he was one of the most influential men of his era and a renowned force on the battlefield.  His lifestyle arguably caused the Peasants’ Revolt, he was the uncle to Richard II and father to Henry IV, he was married thrice, the third time to his long-term mistress and governess to his daughters, Katherine Swynford.  John of Gaunt was basically Sir Gawain except actually real.  When I was in the Tower of London and saw the armour that is supposedly his; even though Alison Weir explained that it could not have been; I was incredibly excited.  I am not sure if it is strange to have a crush on someone who died approximately six hundred years before you were born but yes, speaking candidly – I have a little bit of a thing for John of Gaunt.

The Scandalous Duchess comes to the story with a completely different angle to Anya Seton’s book.  First of all, it is not written in the 1950s, illegitimacy does not hold the same social stigma but also, women can be written with far greater agency.  Seton’s Katherine was a naive young maiden was married off to a coarse man who she feared, never acknowledging her true feelings for the Duke of Lancaster even to herself until he confessed his own.  This rather echoes Samuel Richardson’s recommendations for women that they not be in love before the man says that he loves them.  Jane Austen herself satirised these in Northanger Abbey when Catherine Morland dreams of Henry Tilney but Austen assures the reader that he had dreamed of her first.  O’Brien allows Katherine the liberty of her own heart, although she too has to keep her counsel.

Anne O’Brien focuses more on the passion between the two rather than the corrosive effects of their sinful lifestyle.  This is another sign that The Scandalous Duchess was not written in 1950.  Rather than Katherine being carried off by Gaunt as she was in ‘the original’, here O’Brien allows her to consider her options and decide for herself whether love will be enough to make up for her lost reputation.  It is naive in many ways, she is signing up for a life of hardship and uncertainty without real protection in a perilous and male-dominated world.  Still, Gaunt himself steps in larger than life, full of ambition and arrogance and passion.  It was striking how similar he was in tone and manner to his Katherine counterpart …

The business-like manner in which the two of them establish the terms of their affair seemed uncomfortable and unnatural at first, particularly the bald way in which Gaunt stated his physical desire for her … there was some rather ropey dialogue.  Still, O’Brien does paint a very convincing attraction between the two.  We have no way of knowing how John of Gaunt ended up in bed with his daughters’ governess.  We only know that he did and frequently enough to produce four children.  He provided for them handsomely and later Katherine lent him money herself to help with his military campaigns.  Clearly, it was a relationship of mutual respect but it must have been deeper to survive twenty-five years despite the frequent long separations and public pressures.  Certainly, marrying Katherine helped the Beauforts achieve an easier status, but it was also something that John of Gaunt did because he loved her … and she loved him ‘and she showed it’. 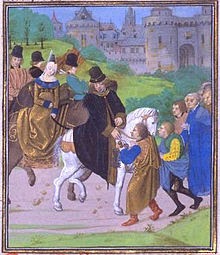 The most significant change between The Scandalous Duchess and Katherine is that this novel takes a far more confrontational approach between the women in Gaunt’s life.  O’Brien places Katherine in Constanza’s household, serving the Duchess by day and sleeping with the Duke by night.  This is a stark contrast to Seton’s book which has the two kept at opposite ends of the country and meeting only once.  Even Weir points out that Constanza’s daughter was the only one of the Duke’s children who was not brought up by Katherine – it would have been wildly inappropriate for Katherine to be in the Duchess’ orbit and despite his manifold domestic short-comings, John of Gaunt does seem to have treated Constanza with courtesy.  Allowing a public showdown between wife and mistress as in The Scandalous Duchess would suggest extremely poor household management.  That being said, he is on the record as banishing several of his wife’s Spanish serving women to a nunnery for several weeks as punishment for ‘gossiping’ …

I noticed also that there was a greater degree of ‘realism’ … it was a fairly standard Harlequin romance but unlike Seton’s Katherine, O’Brien acknowledges the Duke’s personal failings.  He was an arrogant man, he was incapable of physical fidelity, he dragged Katherine into his disgrace and he embarrassed his wife.  Still, he was also an able and committed politician, honourable in his duty to his nephew and a devoted father.  This gave him a more nuanced personality than Seton’s Gaunt who only loved Katherine and the children he had by her.  O’Brien also showed the affection that Katherine was held in by other members of the Lancaster family, Henry Bolingbroke would refer to her as his mother in later life.  One of the things that bothered me about Seton’s book was how the divisions in the different families were clearly marked out, while Weir’s biography showed that Katherine’s Swynford children, John’s Lancaster children and their Beaufort brood all worked together and were loyal to each other.

This was a quick, fluffy read – I learnt nothing about the Duke and his lady love that I did not know before but I heartily enjoyed it all the same.  Still, it was a surprisingly entertaining retelling of a truly remarkable love story.  Katherine at times seems impossible but still not quite so much of a nitwit as most of Philippa Gregory’s heroines, her love for the Duke is believable and their passion soars.  O’Brien has made this story her own, creating a colourful and very romantic novel.