Eleanor Catton is something of a wunderkind, she won the Booker Prize last year for The Luminaries which is sitting and waiting for me in my Kindle.  In the spirit of background reading however, I decided to try her first novel beforehand.  The Rehearsal was shortlisted for the Guardian First Novel prize; for someone who has yet to climb out of her twenties, Miss Catton is on quite the winning streak.  I was struck though in reading this novel that it could never have been written by anybody who was any older, it draws too strongly on the memories of being a teenager and at that uncomfortable doorway between innocence and knowledge.

The Rehearsal centres on the fall-out from an affair between a teacher and student having been made public.  In the second strand of the narrative, the same scandal then takes on a whole new meaning when it is appropriated by the local drama academy as the subject of their end of year production.  The whole novel is a performance, the dialogue is incredibly highly polished, there are frequent jumps in the chronology, scenes are shuffled together, the two branches of the story become intertwined, characters play each other, events are relived through the eyes of another character.  The title is aptly chosen, the young girls at the centre of the drama have not yet decided what it is that they want, who they want to be, who they are going to be – this is their literal rehearsal, not merely for a recital or for a play, but for life – this is their chance to practice.

Victoria’s affair with Mr Saladin has opened the girls’ eyes to the real adult world.  They are angry, they feel tainted by association – they hold Victoria to be complicit in what has happened.  We only have to look at the news to see that the virgin-whore dichotomy is alive and well.  Last year, Robert Colver, a prosecution barrister described a thirteen year-old girl in court as ‘predatory’ and the judge of the same case said that she had ‘egged on’ the defendant.  Both these men were disciplined but the attitude cannot be so clearly done away with.  Last year, maths teacher Jeremy Forrest ran away to France with an underage student.  The widespread opinion appeared to be that he had done nothing wrong, that the girl had led him on, that the two of them were in love.  This was despite the fact that the young girl was vulnerable, with documented problems at home and a history of bulimia.  Her apparent willingness meant that no crime could possibly have been committed, never mind that Mr Forrest had been in a position of trust, never mind that the girl’s age meant that it was illegal for him to have a relationship with her.  The distrust of female sexuality and the question of consent is as old as the hills.  Blame will always fall on the girl.

Still, this is not a novel about protection of innocence.  Catton is not writing about a child being exploited, but rather about ‘performance’, the way that we learn to hide our true feelings, to be an actor in our own lives.  The novel borrows many devices from the theatre; soliloquies, stage directions – indeed, The Rehearsal itself feels very experimental, it has a real ‘arthouse’ vibe.  The adults are never named apart from Mr Saladin, the teachers at the Drama Institute are referred to only by their subject.  The saxophone teacher notes in a bemused sort of way that all of the mothers of her pupils are ‘played’ by the same woman; different costuming, different hairstyling but otherwise indistinguishable.

The saxophone teacher provides a focus for the first narrative, the pupils come to her tutorials to make confession, pouring out their innermost thoughts for her perusal.  It is here that the dialogue is at its most theatrical, with the saxophone teacher’s monologues stripped of anything but their subtext.  On the very first page, she explains to a mother that she cannot teach her daughter because she is too young and ‘a film of clouded breast milk clings to your daughter like a shroud‘.  To all of this, the mother responds meekly, nodding quietly in agreement as if nothing strange has been said.  The saxophone teacher has no interest in children, there is something of the Miss Jean Brodie about her, she wants her pupils to be ‘moody and bewildered and awkward and dissatisfied and wrong.  In short, she wants them to be adolescent.

The three main visitors to this shrine of sexual confusion are Isolde (sister to Victoria), ‘rumpled and thoroughly secondary‘ Bridget and the inscrutable Julia who is ‘too bright for the slutty girls and too savage for the bright girls‘.  This is one of those novels that is full of quotable lines; another way in which it flashes its theatrical claws.  While Victoria and Mr Saladin’s affair takes place takes place ‘off-stage’ but is the subject of much ‘on stage’ speculation.  The girls relay the school’s rumours, offer their own speculations, relive their mandatory counselling sessions and offer up their own conflicts to the saxophone teacher’s merciless monologues. 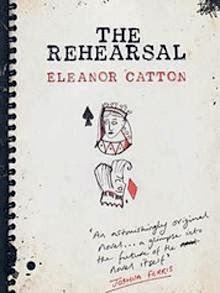 In the second narrative, young Stanley has just started at the Drama Institute.  The teachers; Head of Acting, Head of Movement, Head of Improvisation, Head of Voice; despair of the fresh intake’s self-conscious performances, wanting them to ‘unlearn’ themselves, wanting to peel back the outer layers.  I found this strand less engaging – although the artistry was no less mannered in the other half, I found the allegorical drama exercises off-putting.  The Theatre of Cruelty exercise was particularly unpleasant, where a young man is physically humiliated while the rest of the year group look on.  Later, one of the staff members notes that over the years, the students have become desensitised – in the past when that exercise was staged, the students stormed the stage in protest.

Stanley himself is no more sure of his own identity than the Abbey Grange girls.  In the world of the Drama Institute, nothing is certain – Stanley has stumbled down the rabbit hole and into Wonderland.  The institute is a world of liars where nothing is what it seems.  The pupils themselves are deciding who they are going to be, trying on new personalities as easily as they practice different parts.  The parallels to Alice are frequent, the end of year production even centres on playing cards.  Inspired by Victoria’s sex scandal, the focal point has a card deciding someone’s sexual identity. 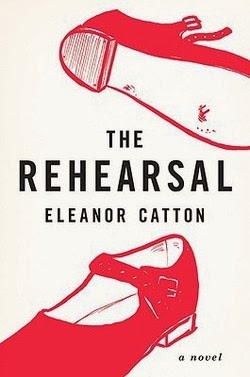 Parallel to this, the Abbey Grange girls are going through confusions of their own.  I was really impressed that Catton managed to write a novel about two young girls feeling confused about their sexuality without having to turn this into a book about lesbianism.  Catton explores the murky mysteries of human desire, a subject far less clear-cut than a simple question of binary sexual preference.  Isolde and Stanley begin a relationship that seems to barely exist on-stage, each with motivations that must be entirely opaque to the other.  In an aside, one of the girls recounts their Sex Ed class, where Miss Clark had put a condom on over her shoe, to demonstrate its flexibility and thus refute in advance the claims of any boys who might refuse to wear one.  While the adults in this book are often well-meaning, The Rehearsal makes it obvious that Miss Clark’s advice is just enough to steer these young people safely out to the other side.

This novel truly stretches the boundaries of its form – the reader is never quite sure how much of this is actually happening, how much has actually happened.  How far did things go between Victoria and Mr Saladin?  How much of what the girls report to the saxophone teacher really took place?  When all of these adults nod along so equably, what is the saxophone teacher saying in fact?  We have no way of telling and even if we did, the point of The Rehearsal appears to be that genuine emotion, true feeling is impossible.  Again, it is not surprising that Catton is such a young author – the central message of this novel is surprisingly bleak.

Just the same, at times, Catton even seems to dismiss her own work.  The Head of Improvisation tells to Stanley’s auditioning class that theatre is a mere ‘purified version of real life, an extraction, an essence of human behaviour that is stranger and more tragic than everything that is ordinary about me and you‘.  When asked, one particularly precocious pupil comments proudly that theatre ‘isn’t real life and isn’t a perfect copy of real life.  It’s just a point of access‘.  The characters of The Rehearsal are not very three-dimensional, I am not even sure that they are supposed to be, they exist as ideas.  They exist to provoke discussion – even simple discussion with oneself.  Who are we?  What do we want to be?  What do we desire?