I first read The Book Thief back in 2008 while I was on my Year Abroad.  It is one of those novels that sits slightly awkwardly between the Adult and Young Adult genre. Still, this was a book that I really fell for; Holocaust fiction can be very, very difficult to pull off effectively but Zusak has created a stunning and original story that lingers long after the final breathtaking line.  I watched the film recently at the cinema and found myself slightly underwhelmed by its prettiness.  Every shot was artistic and beautiful, there was snow in the winter time, even Geoffrey Rush’s hair was perfectly tousled.  The beauty of The Book Thief came from its starkness, the triumph of that human instinct for survival even at the very worst of times.

One of the most memorable aspects to this novel is its narrator, Death.  This is no Grim Reaper with a scythe, as Death says himself, he can be ‘amiable. Agreeable.  Affable.  And that’s just the As.  Just don’t ask me to be nice.  Nice has nothing to do with me‘.  One of the tag lines for this book states very appropriately ‘When Death tells a story, you really have to listen’, he is the ultimate omniscient narrator and indeed, it is hard to think of a more appropriate one for a novel set in World War II Germany.  He is one of the main protagonists in this book, just as Liesel and the Hubermanns are – Death is absolutely everywhere.  There are times when he appears didactic, that he tells the reader rather than showing, but he is Death, he is not subtle.

The Book Thief has one of the most striking opening passages that I can ever remember, I included it in my Top Ten First Lines:
First the colours.
Then the humans.
That’s usually how I see things.
Or at least, how I try.
Here is a small fact:  You are going to die.
Zusak makes his purpose clear from the beginning – this book will be grim. 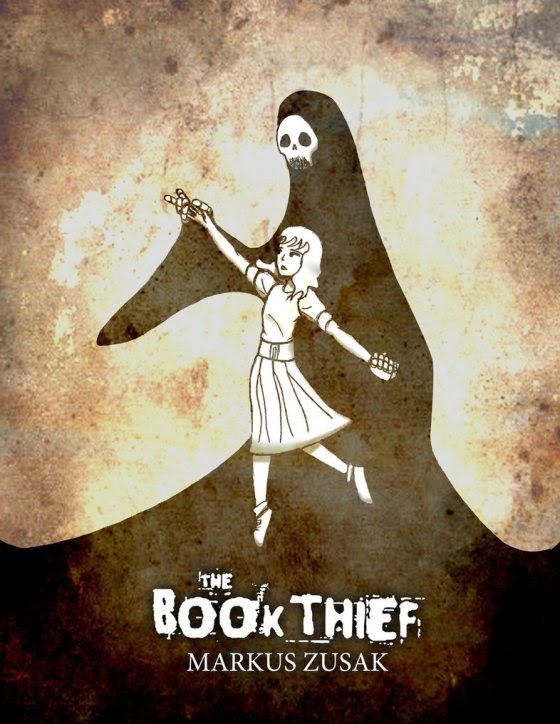 Death introduces himself calmly, tells us not to be afraid, is almost apologetic for his occupation and confesses that his main respite from his task is watching the survivors, the ‘leftover humans’.  And so, he tells us the story of a particular favourite, the Book Thief.  Liesel Meminger.  Aged nine as the book opens, we meet Liesel beside a train immediately after her younger brother’s death.  Her mother is giving the two of them up to a foster family, her father is a Communist and her mother is desperately ill. After her brother’s burial, Liesel begins her stealing career by pocketing The Gravedigger’s Handbook and shortly afterwards she finds herself with her new Mama and Papa, Hans and Rosa Hubermann.  She never sees her mother again.

It is hard to really describe the main charm of this novel in a review, it does not come from what could be a relatively mundane tale of wartime hardship.  It comes from Zusak’s rich use of language.  When Liesel boards the train again after her brother’s death, she does so ‘as if everything had happened’.  When it is cold, people shiver ‘like the future’.  This story glows with the energy of its prose.  I loathed The Boy in Striped Pyjamas, I found it offensive on every level but although this is another tale of fictional suffering, I found The Book Thief thought-provoking and more than a little emotional. 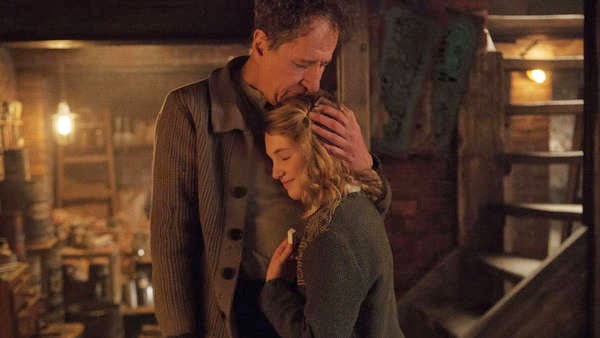 There are many characters to love, Liesel herself is an endearing and courageous heroine.  I think that my favourite was Hans Hubermann, he was such a very gentle man – he reminded me of my Grandpa and for me, praise does not go a great deal higher.  He sits with Liesel through her nightmares, teaches her to read, draws her out of her grief and his love for her as his daughter is one of the most beautiful parts of the novel.  Even his wife Rosa, who is not as easily loved as her husband, also has a warmth to her in her fierce loyalty.  These are people who take on Liesel without any questions, they are living in Nazi Germany but they know the difference between right and wrong. 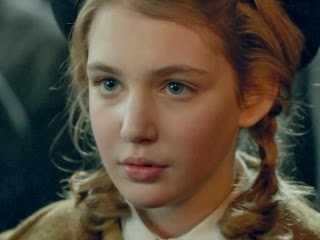 Early in the novel, Death observes the grave-diggers as they bury Liesel’s brother, that one of them is in charge and the other is doing his bidding.  But, as Death wonders, what would happen if the other was more than one?  Liesel does her stint in the Hitler Youth, as does her best friend Rudy.  They attend the book-burnings, they receive the propaganda, they perform their Heil Hitlers with everybody else but yet they still question and quietly rebel against the Fuhrer.  It is hard to write a novel set in Germany during World War Two and show honest resistance.  There is a reason why Hans and Sophie Scholl are so important to the German psyche – they need to believe that not everyone stood by idly and let it all happen, or worse that all Germans were pro-Nazi.  The Book Thief explores the dilemma of the bystander – what do you do when you feel that what is happening is wrong but you fear for your family if you speak out? 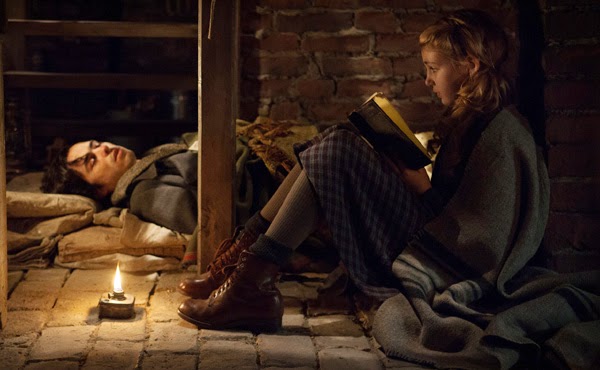 Hans Hubermann paints over anti-Semitic graffiti, he does not want to join the Nazi party even if not doing so costs him business.  He is a good neighbour, a good father and a good friend to the boy whose father saved his life twenty years before.  When the Jewish fistfighter Max Vanderburg arrives at their door, half-starved and scared out of his wits, the Hubermanns do not hesitate.  He can come inside and the door is closed behind him.  Max’s story is one of the most compelling strands of the book.  He and Liesel have a bond of mutual survival that never seems awkward or worse, like grooming.  He understands her.  Their relationship was also one of the strongest aspects of the film.  I had imagined the terrifying tedium of being confined to a small space as Anne Frank was, but I had never really considered what it would have been like to hide someone.  To have someone concealed in your home for years, to live everyday with the risk is staggering.  Yet people did.  It’s a kind of courage that makes you grateful to be human.

The Book Thief does not deny the unfairness or essentially amoral rhythm of our world.  Young Rudy Steiner is top of his classes, can run faster than anyone else and once covered himself with charcoal so that he could pretend to be Jesse Owens.  He fancies himself as a ladies’ man and adores Liesel unashamedly.  From very early on, Death tells us what his fate will be, Death who winces along with us at the waste, the horrible, sinful waste at the heart of every war.  As Death observes, young men may think that they are running at their enemies, running at glory, running at courage, but they are only ever running to him.  What The Book Thief celebrates is survival, clinging on despite the odds, holding on to the hope inside and believing that things can get better.  Liesel walks with Death, she knows him when she sees him, she loses those she loves to him and yet she walks on and meets him for the final time without fear.  As the novel opens, it is difficult to believe Death’s assurances that he means us no harm, that he is merely a result but the story of the book thief shows that Death himself is not to be feared – we do this to ourselves.