This book was beautiful.  The concept is simple – the execution is magnificent.  It’s like a literary Groundhog Day, the reader knows what is going on even while the characters are not so sure.  Ursula Todd is born in a snowstorm in 1910 and dies during the birth, strangled by the cord.  Darkness falls … and Ursula gets another chance.  This time, Doctor Fellowes arrives in time and the baby Ursula survives.  It’s an instantly intriguing notion – what if we really could go back and change our past?  Would it make things easier?  At different points in the novel, the narrator remarks that ‘practice makes perfect’ … but would it really?

This is a novel about possibilities, about paths not taken but also about writing and the power of the author.  Atkinson gives the characters a second chance, a third chance, a fourth. Ursula is trying to navigate her way through the twentieth century so she is going to need all of the help she can get. In the prologue, Ursula walks into a Munich bar in 1930 and shoots Hitler; her many lives take her through both World Wars, the Spanish influenza and well into the 1960s.  By Atkinson’s choice of structure, the reader can never forget that Ursula is a fictional creation, but yet she still seems very real and I found myself truly willing her that most fairytale gift of all, a happy ending.

Ursula grows up in an apparent pastoral idyll, living at the House at Fox Corner which her father Hugh notes sounds like something out of a children’s book and indeed, this does fit in to that Edwardian mould.  Her mother Sylvia is more waspish and generally speaks in book quotations – her feelings about her children are mixed.  Ursula is third of five, the ghastly Maurice, the lovely Pamela, adored Teddy and then Jimmy the afterthought.  There are the two servants who are either endearingly grumpy or endearingly loyal.  And of course, because no story would be complete without one, there is the rebellious Aunt Izzie who is there to provide impractical advice and stoke rebellion wherever possible.  In most novels, the fates of these characters might appear predictable but in Life After Life, everything and anything is possible.

Atkinson’s work often features World War II but although world events are highly significant to this novel, a lot of Ursula’s near misses are more mundane.  She wades out too far in the sea with her older sister as toddler, the roof tiles are slippery when she reaches out to rescue her doll.  These are the realisations of fears of any parent – in real life there are no second chances, the child lost can never be retrieved.  There are also the darker wordless terrors, such as when Teddy stumbles across a dead little girl in the woods.  Later, one of their next-door neighbours’ daughters also disappears.  But in another life she does not.  Or does she?

Each time that Ursula meets her maker, ‘darkness falls’ and then she returns to the blank slate of the snowstorm which heralded her birth.  During one particularly tricky incident as Ursula attempts to evade the annihilation of the family by the Spanish flu, there is a weariness as each time she is thwarted which prevents this from ever seeming repetitive – Ursula is as fed up with this as we are.  Atkinson paints Ursula’s awareness of her gift with a fairly light touch, it is presented as a kind of deja vu, sometimes she senses it and sometimes not.  Certainly, the eight year-old Ursula becomes increasingly desperate to prevent the maid from bringing the deadly Spanish flu into the house; finding herself continually thwarted, Ursula eventually resorts to shoving Bridget down the stairs.  This of course results in her being sent to visit a psychiatrist.

It is perhaps inevitable that Atkinson would find it necessary to slot some philosophy in, as Dr Kellet ponds the nature of reincarnation and time itself; ‘Time is a construct, in reality, everything flows, no past or present, only the now‘.  In the now, we can do anything.  As the author, Atkinson is God.  She has it in her power to let Ursula die or return her to life again.  In several versions, Ursula perishes in an air raid shelter during a bombing raid, during several others she is part of the rescue team sent to dig everyone out.  The reader recognises the victims from their grisly remains, but Ursula does not. 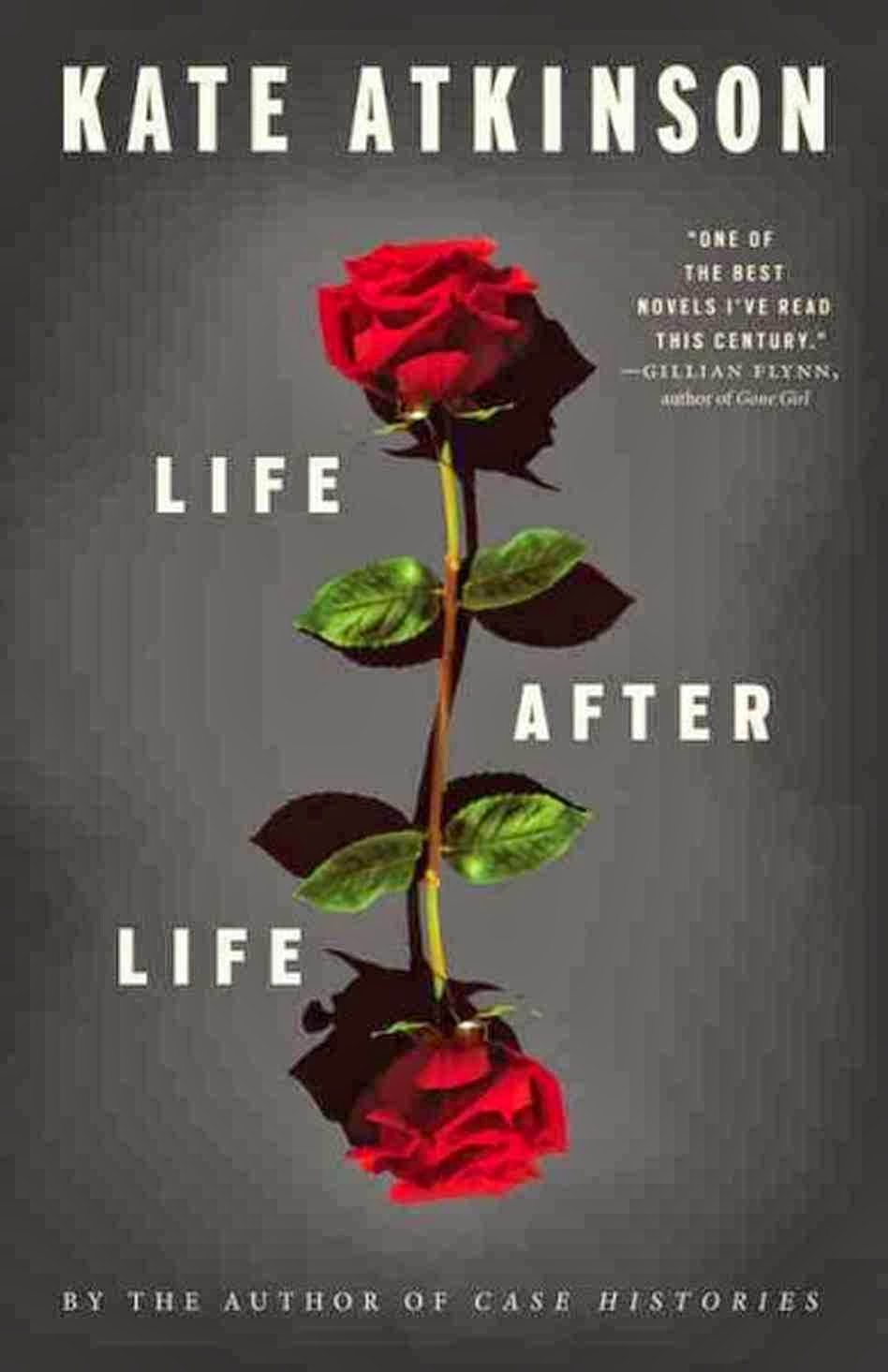 I thought it was rather daring that Atkinson was even able to alter Ursula herself based on the events that befell her.  In one particularly upsetting life, the sixteen year-old Ursula is raped and impregnated by an American friend of Maurice’s, leading her down an unfortunate path via an illegal abortion (procured by Aunt Izzie) to an abusive marriage.  The next time around, Ursula socks the American in the jaw and walks on.  Good girl.  There are perhaps times when Ursula seems slightly blank, or at least detached.  Unlike Pamela who always marries Harold, or Teddy who always loves Nancy Shawcross (unless poor Nancy perishes in childhood), Ursula’s life changes with each new incarnation – yet still, she retains the reader’s sympathy and is somehow still compelling.

What was intriguing the extent to which Ursula herself was able to alter her own destiny.  After all, she has no control over whether or not she dies at birth.  She has no way of forcing the painter to look up from his work in time to rescue her and Pamela from drowning.  Gradually the reader is given clues that other people’s choices can change too.  When Ursula visits Dr Kellet in a latter life, he shows no awareness of ever having had a son.  Hugh does not always leave his sister to give birth to her illegitimate child in Europe.  Sylvie remembers to buy some good strong scissors before going in to labour.  Is this practice makes perfect?  Or is it just a bat’s squeak of an echo of what has happened before coming back through time to warn us of the consequences of our actions? 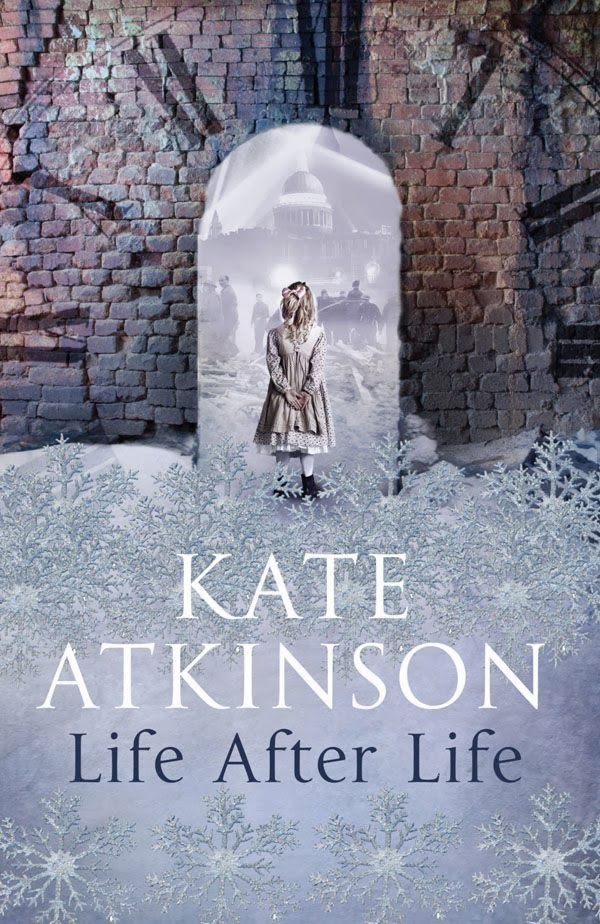 The twentieth century is a ripe playground for ‘What If’ history.  The question of what might have happened if Hitler had been stopped has trouble people for decades, although for myself, I am inclined to think that the state of Germany at that time had left it vulnerable to extremism.  What might make for a more interesting ‘What If’ is what could have been saved had a certain trigger that was pulled a century ago been stayed.  In one of Ursula’s more unlikely lives, she finds herself married to an ambitious Nazi and befriending Eva Braun.  Widowed and trapped with a sickly daughter in the dying days of the Third Reich, Ursula is forced to kill herself and young Frieda – the point is made heavily; World War Two caused great suffering on both sides.

There is an element of the theatrical to this novel, a kind of bravado about being British and trying to make the best of things.  I felt as though a lot of it was wish fulfilment, anybody who has ever experienced grief knows what it is to wish someone back, to wish, wish, wish with all your heart but in life, we cannot undo death.  Atkinson’s generousity to Ursula in allowing her to redo, retake, try again creates a moving story but as the novel finished on the happiest possible note, I felt somehow duped, feeling that this might well be a story that Ursula was telling herself.  A happier version than the sad reality that faced all too many people who had the misfortune to live through two World Wars.  There was too much loss to face, far too much.  Far easier to pretend that we can have another try and do it better next time.

Atkinson has created a sparkling jewel of a novel, a hug of a book that deserved every award it received, joyful despite the tragedies, tragic despite the humour and life-affirming despite having repeated and frequent deaths.  I had not realised that it was possible to be a bigger Kate Atkinson fan that I was already, but clearly I was mistaken.  Life after Life is a truly amazing read and deserved to be cherished for decades to come.