When I spotted that this had been released in paperback, I actually gasped in delight.  The original Cazalet quartet are among my all time favourite books, so All Change is like a wonderful parting gift from the always spectacular Elizabeth Jane Howard.  Nobody does sprawling family sagas of quite the same quality, I heard the news of her death last year with great sadness. This novel seemed like a beautiful parting gift for all of us who wanted more.  I have to admit though that I had some misgivings going in – the previous instalment Casting Off had provided a very satisfying resolution and as anyone who has ever discovered that joy of knitting will realise, when you cast off, the time has come to finish.  It was lovely to meet the characters again, to spend time in their company, but All Change left me with more questions rather than fewer and rather than the comfortable feeling of everybody having received their just desserts, I left them feeling terribly sorry at the way things had turned out.

Elizabeth Jane Howard began the Cazalet saga shortly in the 1980s on the advice of her stepson Martin Amis, shortly after leaving his father Kingsley Amis.  Her idea was that many war-era novels put family life in the background and Cazalets was designed to do the opposite, she ushered in her characters in the late 1930s for Light Years which ended as Mr Chamberlain came back with his Peace Paper.  Marking Time covered the war years, as did Confusion and then Casting Off showed the family adjusting to the post-war world.  Howard kept admirably well to her planned structure of covering ten years so it is interesting that she chose to jump forward to the 1950s for All Change.

It is hard to imagine a saga like this one being published today, all of the nostalgia for the inter-war years, even Downton Abbey has more subversive story-lines than Cazalets.  Its strength always came from Howard’s often very sparse prose that reveals a great deal without her ever having to tell the reader anything.  Of course, Howard also wrote some of the most natural dialogue I have ever come across.  Much of it was inspired by her own family life and her affection for her creation, despite their many flaws, always shone through.  With a title like All Change, one might have been fooled into thinking that alterations were afoot but no, despite the changing times, the Cazalets remained firmly rooted in their habits.  Alas, the modern world was ready to move on without them. 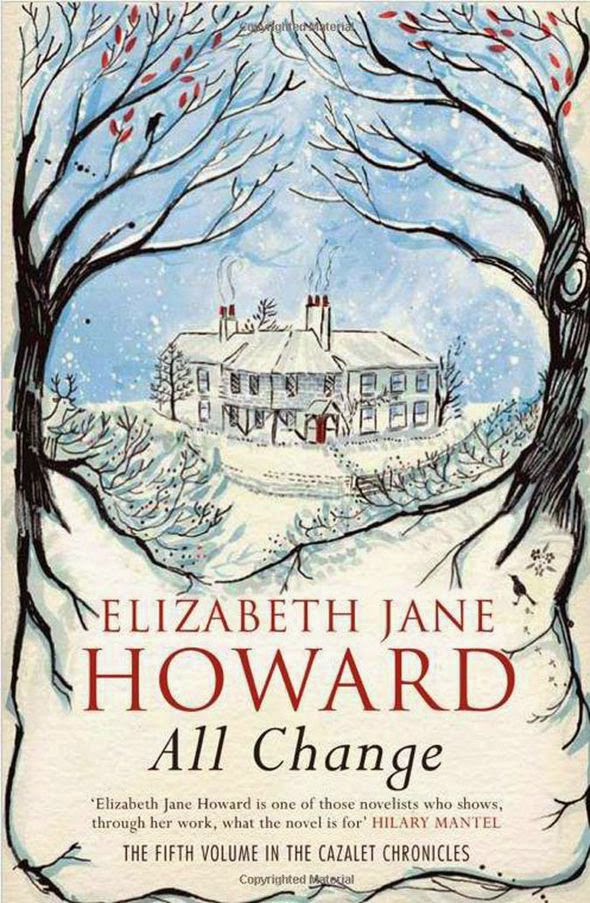 I found the time jump rather confusing.  On the one hand, many of the main characters had sprouted various children who were at the chatting and making ‘killing remarks’ stage of life.  On the other, most of the actual relationships remained frozen as they had been in 1948.  Hugh and Edward were still not really speaking.  Diana and Edward were still pretending to be happy while Edward realised what a mistake he had made in divorcing Villy.  Rupert still pottered about and got on everyone’s nerves by simply agreeing with the last person to speak to him.  Polly and Gerald are still in newly-wed bliss, despite the eight years of marriage and four children … but then, the reader would have wanted nothing less for Poll.  The debacle of Edward’s divorce probably would have benefited from a greater resolution in the intervening years however and the idea that the family had refused to really meet Diana seemed strange when the Duchy had invited her to stay in Casting Off.

The death of the Duchy in the opening chapter was a real loss.  Her quiet chats in the roses to whichever family member in need of guidance were always lovely and despite her lack of business experience, it is hard to imagine things going so drastically wrong with her around.  It surprised me that she was still apparently ignorant of her daughter’s sexual orientation, I had truly thought that at the end of Casting Off, all that was clear and Sid had been gathered up in the family fold.  In my head, I had pictured Sid firmly ensconced at Home Place and having a fine old time with Rachel.  It was disappointing to read that their happiness had been postponed again.  Still, Duchy’s passing marked the moment when the Cazalet children became the senior generation, with their own offspring approaching the age they had been at the beginning of The Light Years.  It is a moment that will come to us all.

The war years provoked quite a muddling of generations, with Rupert and Zoe’s post-war child Georgie being about the same age as Clary’s Harriet and Bertie.  Hugh also had a daughter through his second marriage to Jemima.  The odd thing was that so many of the children seemed like reruns of their forebears.  Hugh and Jemima’s Laura was very similar to Rupert’s Juliet in Casting Off.  Georgie was very like his elder half-brother Neville as a child.  Howard does have an uncanny knack for writing childish dialogue without ever seeming mawkish or saccharine but it did feel a little strange.  The strange one was Simon, who seemed to have taken over Christopher’s part as resident Odd Fish, now that Christopher had become a monk and no longer able to participate in events.  I can see why Howard wrote out Christopher who had outlived all interest but it seemed strange to simply replace him with Simon.

There was no word from Jessica’s side of the family other than that they had a place in Costa del Sol, nor from Nora’s rest home for veterans.  Louise remained improbably employed aged thirty-five as a model and without apparent concern for her son who did not feature at all.  Lydia only made a guest appearance.  It was slightly disconcerting, like a television special where half of the original actors had other commitments.  The strangest part though was Neville.  I had particularly liked his character, his blunderbuss exterior which hid his inner insecurities, his over-grown schoolboy insensitivities, even the way that he irritated Polly before her wedding by repeatedly calling her Lady Fake.  The idea that he changed over a decade into a louche, sleazy, would-be-incestuous creep was so disappointing.  The whole storyline was ridiculous – incest cropped up in earlier novels when a drunken Edward made passes at Louise but the way that Howard seemed to sidle up to a consensually incestuous relationship and then sneak away again just seemed pointless.  Not only did it seem ludicrous that Juliet should not be aware that Neville was her brother (surely Rupert would have at least mentioned him), but at fifteen, the whole thing seemed like grooming.  It was the very lowest point of the novel for me.

Another strange character was Diana.  She had been sharpening her talons at the end of Casting Off and Edward had obviously started to realise the rough bargain he had made for himself but I always felt that her position was understandable.  She had waited and waited for Edward and gone past the point of truly loving him, but had no other way forward other than marrying him.  It seemed simplistic to simply paint her as a gold-digger – she had loved Edward, she had suffered greatly to remain true to him and he took too long to make up his mind.  I am not sure that Edward would have been satisfied had he remained with Villy – Edward’s tragedy was his greed.  The rest of the family trade stories that paint Diana in the worst possible light, constantly observing how ugly her hands are but I felt that she had rather unnecessarily been cast as the villain.  Edward made his own bed, he had nobody to blame but himself if he had to lie in it.

So many of the characters had their Happy Ever After in Casting Off, yet All Change just seemed to show how there is truly no such thing.  I was not interested in reading about failings in the central couples’ relationships – as a committed reader of the series, I was invested and believed in them and had no desire for a ‘will-they-split-won’t-they-split’ plot device.  I did however have very little difficulty in believing in their financial troubles.  The post-war world no longer valued class in the same way, the Brig’s way of doing business was from a bygone era – they are weighed down by property, their firm is foundering and the simple name Cazalet does not have a value on its own.  The Cazalet men do not seem to realise that failure is an option – methods of escape are suggested but never followed through.  The bank manager who visits them to explain their fate feels sympathy for them ‘to a point’ but has lost respect – he is not of their class, but he knows his trade – not something that the Cazalets deemed important.

All Change was remarkable in its familiarity – twenty years after the previous volume was published and the characters were instantly recognisable.  But while they had all stayed the same, the big change was that there would be no return to the world of Light Years, the harsh realities faced in the war years and the Cazalet world of high tea and picnics simply could not co-exist.  Last weekend, I visited the ruins of an old country house which, like so many, was demolished after World War Two because the family could no longer afford it.  So many families like the Cazalets were brought low by death duties, economic change and simple mismanagement.  One of Teddy’s girlfriends remarks that she had taken part in the last season of debutantes and there is a marked difference in the opportunities open to Clary the writer and Polly the event planner compared to their mothers – the times they were a-changing.  We owe our National Health Service and our Welfare State to the post-war changes, but it is impossible not to feel sadness as Home Place is vacated for the very last time.  The Cazalets were a strong family, a loving family and one has to feel hopeful for their resurgence, particularly since Elizabeth Jane Howard’s death means that this truly was the very, very last volume.

This series was remarkable in how well Howard kept the reader’s interest in such a vast range of characters.  From babyhood, to childhood, to marriage and beyond, the reader followed as the family went through all of life’s milestones and kept faith with each other even with the lengthy separations brought about by war.  People may be dismissive of a story that takes place purely in the domestic sphere but to me, this has been a magnificent series which has taken us through a full gamut of emotions.  I was truly startled during the coverage of Elizabeth Jane Howard’s death about just how much emphasis was put on her personal life.  Although it was admittedly colourful, her true worth comes from her talents as a writer.  With All Change, I felt that Howard had loved her Cazalets just as much as I did, that she wanted to pay them one last visit before her death.  Despite my gripes, I was so grateful to be able to see them again.