Let’s be honest – the title of this book has a certain shock value.  Certainly, it worked on me, catching my eye as I walked past the History section of Edinburgh Blackwells.  And indeed, despite having a six month wait for the paperback, I did end up buying.  There’s something about the Tudors, the drama of their personal lives has completely eclipsed any other aspects of their legacy.  Henry VIII, the much married monarch, his elder daughter with the phantom pregnancies and then his younger daughter who may or may not have been a virgin until her death.  Recent films such as The Other Boleyn Girl and the American TV Series The Tudors have only added to the mythology without really casting any further light on the truth of the people involved.  Amy Licence is therefore being rather brave in her mission statement for this book; according to her subtitle, it is to explain ‘The Sex Lives of a Dynasty from Elizabeth of York to Elizabeth I’.

I have been in something of a Tudor ‘phase’ in my reading at the moment, the review immediately previous to this one deals with Sarah Gristwood’s Blood Sisters, meaning that there is a definite overlap in subject matter.  This is ‘women’s history’ which means that we are in ‘may have, could have’ territory.  Reading other people’s reviews, I know that this is something that many find extremely irritating, this eternal uncertainty about these long-dead people’s lives.  Still, it’s not something that usually bothers me, after all it would be far worse if nobody ever bothered to write about what went on off the historical beaten track.  And where women were concerned, the simple fact is that there is a lot less documentation.  It strikes me as rather ironic that while I have recently read The Watchers, about the Elizabethan secret service, there is more recordable evidence of espionage than there is of midwifery practice in the sixteenth century.

The book’s chapters focus on the significant confinements of the main characters of the Tudor era, then once it gets past Jane Seymour, Licence simply speculates on why the births stopped.  As the author notes, Edward VI was the last heir to the throne to be born in England until Charles II.  The Tudors had quite the record of gynaecological disasters. I was surprised that Margaret Beaufort did not get a chapter of her own, given that she had what appears to have been the childbirth from hell, a widowed and pregnant thirteen year-old who never conceived again afterwards.  Contemporary rumour seems to have it that Margaret Beaufort was small even for her age and it would have been interesting to hear what theories Licence had about Tudor practices to aid women in her situation.  It is a point of note though that in her role as My Lady the King’s Mother, Margaret Beaufort was something of a control freak about organising her daughter-in-law’s confinements, even down to suitable colours for the cushions in the room.  I suppose we all carry our scars in our different ways.

In some ways, this book does not offer a lot of fresh information – I was already aware of the basic birth pattern for Elizabeth of York and then the thorny issue of what precisely Arthur Prince of Wales and Catherine of Aragon did or did not do has been a matter of debate for over half a millennium.  Crumbs.  The problem is that given that reproduction proved to be the dynasty’s downfall, it’s all rather well-worn territory.  Was Arthur Prince of Wales just sickly or did he have testicular cancer?  Was Catherine of Aragon just lying?  If so, why bother?  Her sister Maria had gotten married to their elder sister Isabella’s widower and successfully reproduced so why would Catherine have felt the need to lie?  Did Henry VIII and his sister Margaret actually have some kind of rare form of diabetes that meant that their fertility was affected?  We will never actually know and the sad fact is that even now any one of a myriad of factors can decide whether or not people are able to have children.

I think that the main strength of Licence’s work is just how exhaustively she portrays the experience of childbirth.  Girls were considered physically ready for marriage at twelve (fourteen for boys), meaning that their reproductive lives started much earlier and left women likely to be entering the menopause much earlier, generally mid thirties.  As a twenty-first century female, this is really difficult to imagine.  To me, a twelve year-old girl is so clearly a child … and indeed, many people did consider twelve to be too young, with Elizabeth of York joining forces with her mother-in-law to oppose the early marriage of Margaret Tudor to the King of Scotland.  Still, I had not really considered how this ‘early start’ would affect later fertility.

A ‘modern theory’ about Catherine of Aragon that is featured here is that she was anorexic.  Certainly, that lady is known to have fasted regularly and to have had irregular periods.  It is not difficult to imagine either that with her ambiguous status as widow of the Prince of Wales, this might have been one of the few areas where she was able to feel in control.  Not to mention of course that her father and father-in-law kept her in an almost penniless state – it was Elizabeth of York who paid to get the poor girl back to London from Ludlow after Arthur’s death and after that lady died in childbirth, poor Catherine was friendless.  Feeding and clothing herself and her servants was a constant source of worry to Catherine during her widowed years, she was very depressed and it is not hard to imagine how strange ideas about food might have crept in.  Of course, while the poverty problem was waved away by marriage to the young Henry VIII in 1509, the damage all of this stress would have down to her fertility would not be waved away quite so easily.

A girl at my high school once mentioned during a talk on anorexia that she had suffered with the condition when we were eleven and that the thing had finally made the penny drop was the doctor telling her that unless she started eating properly, her body would not be able to carry a child to term.  With all the medieval folklore valourising fasting, no doubt Catherine saw a virtue in what she was putting her body through.  There was no helpful doctor to gently tell Catherine that all she was praying for would be as naught if she destroyed her body by starvation. 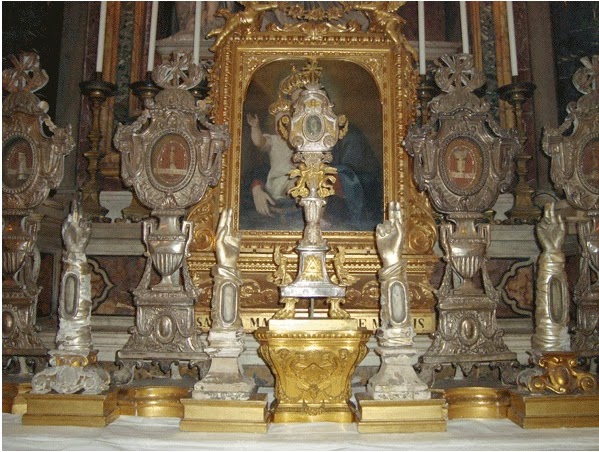 The aspect that really caught my attention though was just how far the Reformation wrought changes in the birthing room.  Saints’ relics and icons were of enormous significance to women in labour.  There were several ‘girdles of the Virgin Mary’ floating around to be clutched during labour and there are records of the relics which were set out during the royal confinements.  These and the pilgrimages to Our Lady of Walsingham and similar were some of the only ways that a Tudor woman could really take control over her own fertility and reproduction.  Childbirth was woman’s work, it went on behind a closed door with the mother-to-be, a few of her relatives and the midwife.  Interestingly, Jane Seymour’s labour was attended by male doctors and that did not end particularly well for her.  This was all part of the massive cultural shift that came in with the Reformation.

Pre-reformation, women were encouraged by the Church to pick herbs at midnight while reciting certain prayers.  After the split, very different connotations came from such activity.  Still, you cannot tell people for centuries that one way of doing things has been right and then expect them to immediately readjust to a wholly new attitude overnight.  Naturally, the women rebelled and in private, the veneration of saints during labour continued.  Women still prayed to saints during labour, they still wanted to touch the relics even if they had been repeatedly told that they were fake.  From this conflict, the seeds for the witch-burning craze are sown.  I had never really considered where that had started before.  Childbirth will always have a greater meaning for women and as the church tried to move the goalposts in the birth chamber, even medieval women who were trained to be submissive were prepared to step up for some civil disobedience.  They fought, they lost.  But at least they went out to fight.

This book does not give a great deal of new information about the Tudors themselves, it sheds very little light on how they felt about each other.  At this stage, nobody can.  However, Licence provides a great deal of very thought-provoking information on just what it was like to be a woman in the Tudor period, a time when one’s highest calling was motherhood.  The remedies prescribed by these women may have had no basis in science but the midwives of the Tudor period were no less heroic than the sisters described in Call the Midwife.  For that aspect alone, this book is fascinating.