I bought this one due to a dear friend’s recommendation.  I don’t often read books in translation but I’d heard so much about this one that it was really good to actually find out what all the hype was about.  I’ve actually never seen the film and have a vague idea that it stars Sean Connery … I am a bit so-so about him playing anyone other than James Bond.  If it turned out that Sean Connery actually was James Bond it would not surprise me, but being expected to believe that he is an actor with a range is a bit beyond me.  But anyway, The Name of the Rose is the story of a series of murders within a monastry being solved by two monks … I started reading it with a certain sense of loyalty to a certain other crime-fighting monk but I realised fairly quickly that you can’t really compare the two.  While Ellis Peters created a series of extremely well-drawn and rather beautiful series of stories, Umberto Eco instead has written a rather baroque and highly intellectual novel that takes in aspects of literary theory, biblical analysis and medieval history.  I think that I will always have a softer spot for the Welsh herbalist but this book contained some truly stunning passages.  I’d never read anything by Umberto Eco before … it’s funny because I read fairly widely but it’s surprisingly seldom to find an author who shows signs of such true artistry.

It’s hard to categorise this book – genre wise it’s wearing a lot of different hats.  Technically it should fall under the “crime fiction” category, which is funny because there’s a lot of literary snobbery about that … I remember hearing one person say that they did not read crime fiction because it tended to involve embossed covers.  Like it or not, people do judge books by their covers.  Still, while on the one hand you have the procedural slasher books, you can also have the far more ornate books such as this one.  Its cover is lovely – the tangled deception.  The story is told by Adso, writing as an old man about his experiences as a novice, experiences which have clearly haunted him.  He travelled to a monastry with his master, William of Baskerville – fairly heavy nod to Sherlock Holmes there.  They arrive and discover that a recent suicide is troubling the abbot and they are asked to investigate.  The book covers the week of their visit as the bodies start to mount up and the mystery unfurls. 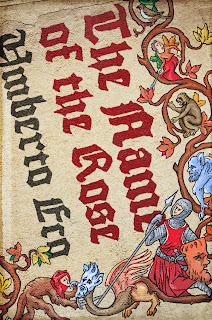 This is one of the most complex books that I have ever read.  The first hundred or so pages were apparently deliberately written to seem opaque to the casual reader.  If you’re going to read The Name of the Rose then you need to be committed.  The unfortunate thing is that books like these are tricky for me during term time, but the summer holiday really helped in that regard.  To be honest, I liked having the chance to read a book that actually presented a certain intellectual challenge – it’s nice when an author actually has expectations of the reader.  I’ve written recently about my thoughts on the Philippa Gregory model of historical fiction – basically just dressing up in pretty clothes and spouting drivel.  The Name of the Rose goes way, way beyond vaguely trying to dodge anachronisms but actually tries to think like we’re in the medieval period.  Eco’s prologue states that this is all based on real documents and it is actually fairly plausible in tone.  Having read quite a few medieval-era books for my various English Literature modules, I recognised the various tangents that Adso goes on – they don’t make for a smooth reading experience but it does give a real sense of immersion into the Byzantine world of medieval politics and intrigue.

I always tend to forget about the Papal Schism – I’m not Catholic although I did once for a bet try to memorise the names of all 265 popes, which is difficult given that opinion is divided over how popes there have actually been.  They stopped giving them fun names like Hilarius and Hyginus about a thousand years ago.  Anyway, so for those with short memories such as myself, for a time, the Papal Seat was in Avignon and basically the church was not a Happy Place.  This is not going to be one of those posts where I try to re-explain it – it was complicated and for me at least not the most enthralling section of the novel.  Anyway, so as well as being a crime/historical fiction novel, it’s also a book about theology – about how we can best live to please God.

This is also a novel about books though, the power of reading.  The monks of this abbey are proud of their library, they are famous for it but they are also secretive.  Only the librarian and his assistant are allowed to know its secrets.  William of Baskerville and Adso of Melk are themselves banned from exploring the labyrinthine interior of the library but as it becomes increasingly clear that the answers lie within, they venture inside.  One of the monks even ponders how far one of them might be prepared to go to gain access to the books.  I can’t imagine living next to the finest library in the world and not being allowed to enter it.  Torture.

One particular book becomes central, Aristotle’s Comedy of which no copy survives – sort of like Shakespeare’s Cardenio.  With a lot of debate within the novel about whether or not it is acceptable to laugh, the idea of comedy is a dangerous one.  It’s a real lost book but it interested me how Eco describes it – it seemed believable so I did  look it up.  I like books that involve stories within stories – “books always speak of other books, and every story tells a story that has already been told“.  I read elsewhere that this reflects the postmodern theory that all texts refer to other texts rather than external reality.  Yet still, [spoilers] I thought that it was interesting that while William and Adso build an elaborate theory of the crime and believe that they can predict what will happen next, they ultimately realise that they have been fooled.  I have always been bothered by films like Seven which try to apply a pattern and an order on to senseless violence.  I don’t like the idea of the mind that tries to make violence beautiful.  There is no pattern here – evil is just evil.  The novel therefore ends reminding us of how little we truly can know for certain rather than offering us a definite answer.  That isn’t how your average piece of crime fiction finishes up.

This book is heavily symbolic – Eco is talking about some very high-brow concepts.  In the pursuit of knowledge – how far can we be prepared to go?  It is those without knowledge, such as The Girl who suffer most and quickest but in eating from the Tree of Knowledge, it seems to lead the character to sin the quickest.  William of Baskerville seems to congratulate Adso on breaking his celibacy vow, that love is wiser than any wisdom but the whole episode ends in disaster.  This book asks more questions than it answers. So, I enjoyed The Name of the Rose – I was impressed by it.  It seemed like a book that proclaimed the mystery of faith and it’s not often that a fairly mainstream book does that.  There were times when Umberto Eco seems to be just trying to show us quite how much he knows, to be didactic, but the debate is fascinating.  It’s about much more than simply who is responsible for the death of these monks but also how we identify ourselves.  The meeting between the church representatives, the Inquisitioning made me think of McCarthyism – this book may be medieval but it’s about recognisable people.  It was a haunting read … recommended, but not for the faint-hearted.