Recently, I trekked all the way to Hampshire to visit Jane Austen.  Unfortunately, she has been dead for nearly 200 years. A very lovely friend of mine suggested that we had a Jane Austen themed day and so we did, starting off in Farnborough (where said lovely friend is based) and then moving on to Chawton, where Jane Austen spent the latter years of her life and then finishing up in Winchester, where Jane Austen is buried.  We had a fine old time and I decided to chronicle the experience here.

Even as a loyal Northerner, there’s no doubt that it’s an absolutely beautiful stretch of country and it didn’t hurt to visit on one of the hottest days of the year.  Think very green fields, leafy trees and old-fashioned cottages.  To clarify – while Haworth is unopposed Bronte heartland, Austen country is rather more widespread.  Jane Austen is also claimed by the people of Bath which has rather a lot of Austen-related tearooms, museums etc and there are also the other villages in Hampshire which held significance for Miss Austen and which I have not yet visited. I think I’m going to have to go back again though … it transpires that I am even more of an Austen fan than previously suspected – I was truly giddy with excitement about this day out. 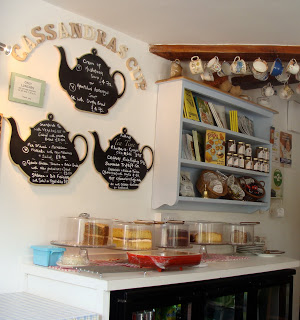 We arrived in Chawton and went for cream teas at Cassandra’s Cup, across the road from Jane Austen’s house.  I can be a bit awkward and dislike cream … and scones but they did do some really lovely crumpets too which I thought provided an equivalent English Breakfast experience.  Cassandra’s Cup also had a truly impressive range of cakes within which might have made me cave if we hadn’t been sitting outside.  Either way – it was a lovely tearoom which also apparently has a Bed and Breakfast attached.

To be honest, I didn’t spot a great deal of amenities in Chawton – I had forgotten to get any cash out but luckily I had enough change to pay with.  There are some lovely park areas around and about but the main attraction is Jane Austen’s house itself.  So, the three of us drank up and we toddled over to visit Jane Austen’s final home.  It’s funny because I’ve seen Miss Austen Regrets and that film had made a real effort to get the look of the place right – it’s a terribly English brick cottage surrounded by roses – a specially bred “Pride and Prejudice” rose.  Oh yes, the bicentennial has prompted all kinds of wild celebration … 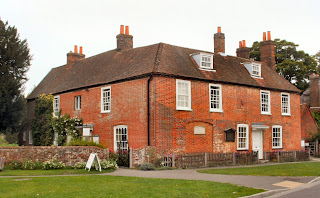 It was a really tasteful and ‘pretty’ kind of exhibition – all of the artefacts were arranged nicely and there were various pieces of artwork to add interest.  I’m much more familiar with the Bronte house in Haworth and it struck me that there wasn’t so much of a story to be told about this house, simply because they hadn’t spent as much time there.  Jane, her sister Cassandra and their mother were let this cottage by Jane’s elder brother Edward Knight who had been adopted as a child – after years of uncertainty, now finally Jane was able to settle down and write.  So in many ways, the Chawton house represents Jane’s happy ending … aside from the premature death of course. 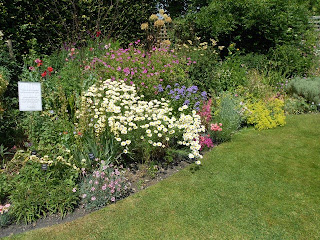 The staff at the Chawton house were all very helpful and friendly; as with the Bronte society, the Austen society are clearly very passionate fans.  The rooms are well-lit – it did make me think a little of how Lady Catherine De Bourgh had criticised one of the Longbourn sitting rooms for having windows that were ‘full west’ – the house in Chawton seemed very well set-up in that regard.  There was the desk at which Jane wrote her novels, I even got to see the famous squeaky door that Jane refused to have oiled because it gave her advance warning of when people were coming in so that she could hide her work.  It’s such a beautiful house and garden … still, I was interested when wandering the spectacular flower gardens to read that when Jane was living there, all of those would have been kitchen gardens.  The Austen family could not have afforded to ‘waste’ beds on flowers, they needed the land to grow their own food.

I really liked the Reading Room that they had downstairs – it had a wide range of extended reading about Jane Austen (they highly recommend What Matters In Jane Austen so they pick well) as well as the full range of Austen canon in various different languages, so I was nicely entertained trying to read Pride and Prejudice in French while my friends caught up with where I had got to in the exhibition.  Then we ambled upstairs which had incredibly creaky floorboards.  I had already known that Jane shared a bed with her sister Cassandra but I was still surprised by just how cramped their living conditions were.  The walls of all the rooms were covered in tasteful period pictures and there was also a handwritten copy of a prayer that Jane Austen had written herself.  I can happily read books by people who aren’t Christian but given that I live in an age that seems to have the popular culture shorthand that all thinking persons are atheists, it was nice to realise that Jane Austen had a personal faith.

Naturally though, my two friends and I had the most fun of all in exploring the garden.  A highly competitive game of Austen-themed Snakes and Ladders was had out in the Children’s area.  For three girls in their mid-twenties, it’s amazing how easily the competitive spirit can break out – it culminated in the clearly more skilful player emerging victorious (me) but it was a tough match.  There were other fun things – in one area there was a dolls house with plastic figurines to act out the stories with.  This also made me very happy.  The Bronte Parsonage had a similar set of objects but somehow these ideas seemed fresher … to be fair though, having all of this outside in the sunshine probably did make the whole section more attractive.  It is a covered area but even so, I’m not sure I’d be keen to play in the rain.

Around the corner of the house, we found the kitchen which not only had clothes to dress up in (amazing, again!) but also a calligraphy area and lavender to put in tiny bags.  Again, we had a whale of a time, coming up with the opening stages of our own personal period drama and taking lots of pictures.  This kind of interactive element was something that the Bronte House doesn’t seem to have at the moment … to be fair, I am aware that the Bronte Society have an awful lot more traffic coming through but all the same, these were simple activities which livened up the visit.  So basically – hats off to the Austen society for having put together a really great fun museum.  As a further note – I found the gift shop absolutely out of this world … the book buying ban was severely tested and while I did withstand, I still bought more than a few postcards for my wall and also my mother’s birthday present five months early.  A great big thumbs up goes to Jane Austen’s House.

After that, we had an amble down towards Chawton House, owned by Jane’s brother.  It all reminded me very much of the big house that Jane’s family visits at the beginning of Becoming Jane.  Incidentally, one of Anne Hathaway’s costumes from that movie was on display in Jane Austen’s house – it made me happy because it made me realise that Anne Hathaway is as short/shorter than me.  I loved that film, I still have it on DVD – the main reason of course was James McAvoy, I tend to automatically adore films that feature him but I also just enjoyed the idea behind it.  Like with the Bronte sisters, we want to write a love story on to the unmarried Jane Austen but the truth could be more prosaic – there is nobody who is as big of an expert in relationships as the person who is not in one.  You have total objectivity.  Near Chawton House was the church were Jane’s mother and sister were buried … two Cassandra Austens, buried next to each other.  It’s odd, they would be two completely forgotten spinsters if it wasn’t for their more famous relative but yet I couldn’t help feel sorry for them being gawped at when they had never done anything to seek the limelight.

From there, we went on to Winchester, where Jane Austen died and was buried.  Unfortunately, due to a concert, it was not possible for us to go in the Cathedral so I’ll have to meander back on another day.  Still, we did all have a pilgrimage down to the doctor’s house where she died – this house has a very tiny label in its front window explaining that it is a private residence and not open to the public.  We all agreed that it must be very strange to own a house where someone that famous died, since you must have people gawping in at you constantly.  Of course, we said all this while sitting on the wall opposite the house, trying very hard to gawp without looking as if we were gawping.  We had a slightly split opinion about whether or not it would be worth public investment to buy the College Street for the nation … personally, I think not.  That house is quite literally where Jane Austen had been taken to have further medical attention, when she knew she had not long to live.  There isn’t enough money in the world to buy every house with a connection to someone famous.

Winchester is a lovely place to visit.  It’s very Inspector Morse style beautiful, a picturesque river, lots of ancient architecture, a stunning cathedral (we saw the outside), very nice tearooms.  I’m more familiar with Chester in the north but Winchester is a similar kind of pretty.  I’ve spent a lot of the last year being excited about being near London and getting to visit various stately home attractions/royal palaces but it’s good to remember how much there is outside of London too.  It was also just really nice to get that wider context to Jane Austen’s world – to see the village that she lived in, the fields she might have walked through, to see the main town near her.  Jane Austen never cared for Bath but she was very happy in Chawton.  Any keen Austen fan (and we three are very keen Austen fans) would enjoy making the pilgrimage and I am very glad that I made it – and very grateful to the particularly lovely friend who did all of the driving!