On Easter Monday, I found myself in Haworth, historic home of the Brontes, in the company of my mother and grandmother.  Now, this turned out to be more of an adventure than expected because those hardy Yorkshire folk had dealt with heavy snowfall by dumping it on either side of the road so that driving between the two heavy drifts proved a bit hair-raising, but we made it safely despite one last minute trip back to retrieve my Mum’s medication from home.  Although I started off the day with a certain amount of trepidation about playing the Three Generation Game all day (it has turned hairy in the past), we had a fabulous time.  So I decided to recommend Haworth as a day-trip destination to my loyal readership.  As a side bar, it has been very exciting about how many new readers/followers/friendly comments I have been receiving lately, not to mention how encouraging my viewing stats have been.  I would be writing this anyway but I do genuinely appreciate the warmth and the positive feedback.  You are all lovely people!

Anyway, to return to my main point, Haworth is somewhere which we actually used to visit a lot.  I knew about the story of the Bronte sisters before I knew anything about the stories which they had written.  I think I was five the first time that I visited the Parsonage and we seemed to go every other year afterwards.  When I was thirteen, I wrote a ridiculously long school project on the Brontes … still, I hadn’t been to Haworth for about eight or nine years before Monday so it was lovely to see the place again.  Very little ever changes about the Bronte Parsonage – Patrick Bronte’s top hat is still in his sitting room, just as it was back in 1993 when I first visited, the Sofa Where Emily Died continues to send shudders down my spine every time I see it … the house was even more draughty than I remembered, but then this has been the coldest spring since records began.  Although many ‘artefacts’ of ‘Bronteana’ remain, it is hard to imagine the house being lived in by them, the upstairs rooms are full of displays rather than furniture.  There are reasons for this though – there are always so many visitors that the house has to be managed in a way to keep everybody moving at a decent speed and prevent traffic jams.  Still, I have caught myself wondering how on earth a family with six children, as the Brontes were when they first arrived in Haworth, ever contrived to fit in the Parsonage, along with two servants. 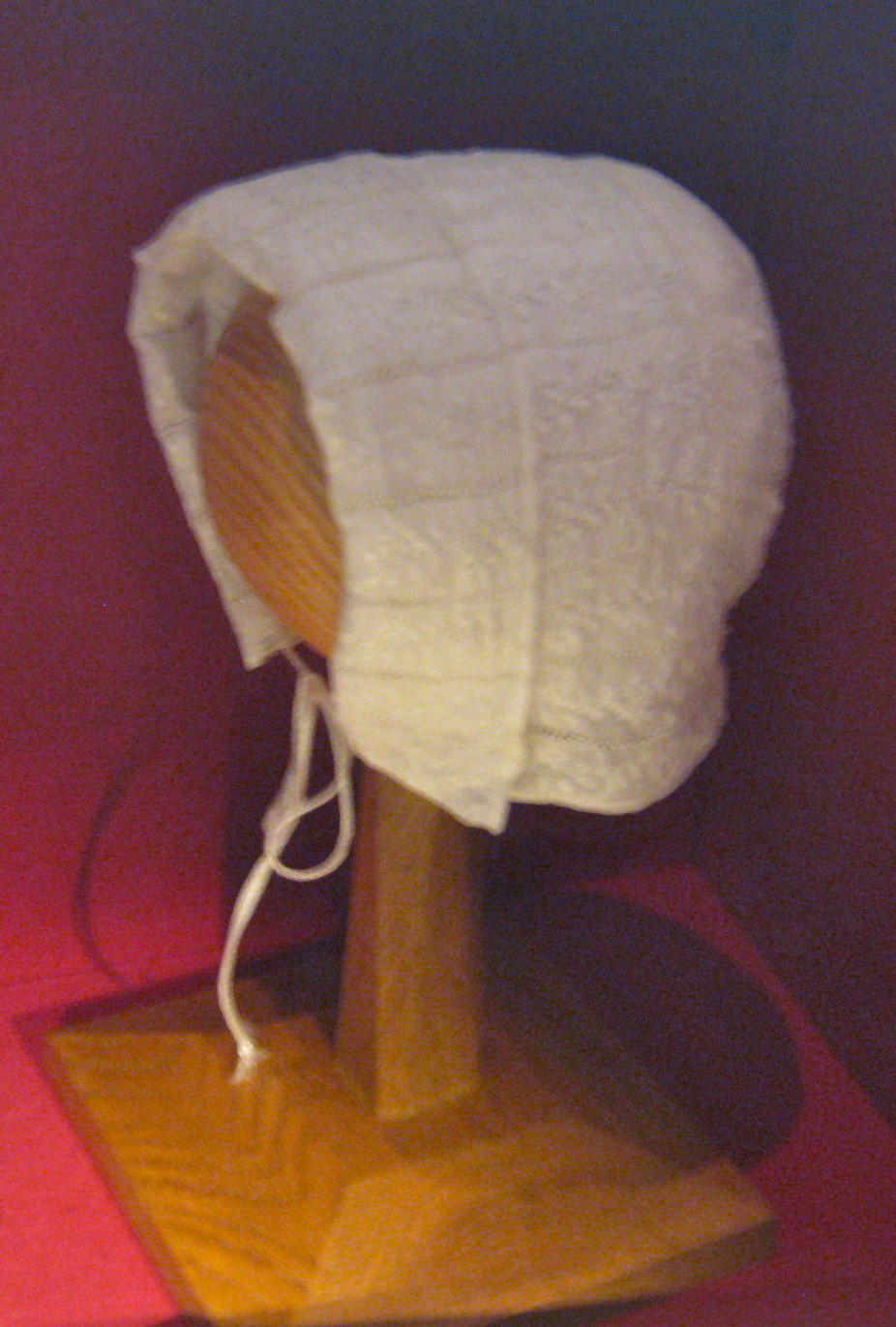 In some ways, the house is an awkward exhibition in trying to fit in the various different phases in the family’s occupancy – there is the downstairs room decorated as Charlotte did it for her new husband Arthur Bell Nicholls, then along the corridor is the kitchen as it was when Emily was in charge.  Upstairs, you have the Children’s Study along with their toy soldiers … it kind of makes you think of the changing life of a house as a family grows up.  Still, the story of the Bronte family is in too many ways a story of sorrow – even skirting over Mrs Bronte’s premature death, the ghastly and avoidable deaths of the two eldest girls at Cowan Bridge would have been enough to mark the family as desperately unfortunate.  Still, the relentless one after the other of the children seems incredibly unjust – that Patrick Bronte should drag himself from rural poverty and try to improve himself only to find himself at the end of his life surviving all his children – it’s a sorrow that I cannot imagine.  I don’t think I want to try.  Even when I was five, the saddest thing in the whole building is the case which holds the baby bonnet which family friend Margaret Wooller made for Charlotte’s baby, the baby that was never born, the baby whose very existence killed its mother.  For people who sneered at the Duchess of Cambridge when she was admitted to hospital with extreme morning sickness – remember, that is what killed Charlotte Bronte.

Still, in the midst of the tale of tragedy, there sprung all of that creativity.  When I was fifteen, I walked all of the way to Top Withens, the house that supposedly inspired Wuthering Heights.  With my eighty year-old grandmother in tow, that was never going to happen on Monday and indeed with all of the snow, we decided to abandon the idea of moor walking because to be blunt, my Grandma likes having both of her own hips and wants things to stay that way.  Still, it’s impossible to be sad when you’re out in Yorkshire, the scenery is just too breathtaking.  It makes me remember again why I don’t want to spend my entire life in Essex – I like living in places that aren’t completely flat.  As a make-do, I bought a postcard of Top Withens in snow and then also the complete works of Anne Bronte, because I lost my copy ofAgnes Grey years ago and have got by with an e-book and borrowing from my mother with The Tenant of Wildfell Hall.

It’s funny – Wuthering Heights is one of my favourite ever books, I first read it aged twelve back when the idea of reading anything with a romantic sub-plot appalled me, I think that the way that none of the characters seemed to like each other appealed to my adolescent self in an odd way (I was often deliberately awkward … and still can be).  Nevertheless, I’ve always thought that Anne was a better writer.  The things that Anne Bronte writes about tend to be more clearly thought out, with fewer plot holes and inconsistencies.  Admittedly, there is only the one book to judge Emily upon but yet it is clear that Anne was maturing rapidly as a writer – she was still only twenty-nine when she died!  I’m not sure why, I never warmed to Charlotte Bronte, in the story of the Bronte family, she always seemed to be The Bossy One.  Jude Morgan explains this in a psychologically interesting way, that she was the child who was never supposed to be the Big Sister, who was only ever supposed to be in the middle, trying desperately to do the job properly.  I think part of it again is that I was trying to read her books when I was in my early teens and possibly not emotionally mature enough for a lot of the passions which she was writing about.  Or maybe I was just being contrary because my mother is such a fan. Anyway – so after gazing at the moors regretfully and promising ourselves to come back another day, we passed on and down the street to rediscover the rest of Haworth.  With such a healthy tourist trade, the brilliant thing is that a fairly small Yorkshire town is able to support some really nice gift shops.  After a really unpleasant half term, it was lovely to be able to blow off some steam with retail therapy – slightly odd that I did so in the wilds of Yorkshire, but ever so much fun.  The shop that I really loved was Daisy Days which had really beautiful cards and gifts – I bought a whole load of things which I had no need of but which I am glad to have just the same.  It’s always nice to see a well-run, friendly, small business doing well, particularly during the current economic climate which I think everyone can agree has been really brutal for retail industry.  The staff were very helpful and to be honest, if it weren’t for my awareness of the limitations of my salary, I could have bought up the entire place.  As it is, I’ve taken their card and am aware of the details of their mail order service.  Friends with birthdays in the next six months, be forewarned.

Further down the street, I got caught up again by the hippy shop and got myself a cushion, then a World War Two propaganda poster (look under the tag for WW2 on the sidebar and you will understand that that is an interest of mine) and the mother and the grandmother were similarly successful.  I really hope that all of these businesses continue to thrive – Haworth seems a far more vibrant place than the last time I visited, and it’s nice that although obviously the visitors are coming because of the Bronte connection, these businesses are successful independently of them.  It always made me giggle about the various ways that they could cram the word Bronte into a business name the last time I was there – Bronte taxis, Bronte Tandoori – I think it’s a bit mealy-mouthed to suggest that all such endorsements should be cleared through the Bronte society but it it does seem a bit opportunist.

No day out would be complete without a nice Afternoon Tea, so our next port of call was The Stirrup which had some cakes which were frankly worth the trip by themselves, plus the pot of tea was much appreciated on a cold day.  Strangely enough, my mother, grandmother and myself had a long conversation over whether or not the wallpaper in the Stirrup would do for my grandmother’s living room because she’s thinking of redecorating and to be fair, the decor was really fresh-looking, it’s definitely had a revamp since the last time I was in the area.  The service was a little bit vague but we weren’t really in the mood to hurry.  Really well-recommended.

So – that was our Grand Day Out – I’ve had a fantastic week’s holiday, I’ve been up running about in Lancaster, Preston and then just spent three days in Edinburgh but just wanted to say that Haworth has really upped its game over the last few years – anybody who has ever read anything by a Bronte would be tempted to sneak a visit but even without the book connection, it’s a lovely place with some spectacular scenery around it.  If you haven’t been yet, go, go!

Brooding About The Brontës – Schedule