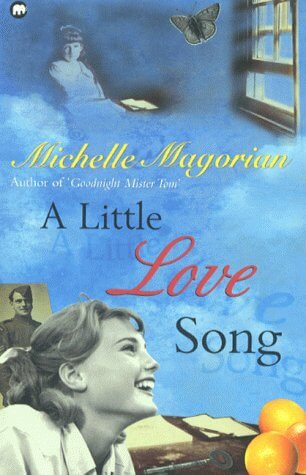 I read Good Night Mister Tom when I was ten and absolutely loved it – it will be reviewed eventually.  After that, I read Cuckoo in the Nest and A Spoonful of Jam, these are similarly World War II related and more or less appropriate for primary school age children.  In the spirit of furthering my enjoyment of this author, my school teacher mother swept up several new books from her school library, one of which was A Little Love Song.  I read it aged eleven and it had quite a powerful effect.  This year I have taught World War II as a topic for my own Year Six class, which included reading Good Night Mister Tom and I was reminded of A Little Love Song and so found myself rereading it.  It is still an excellent book but I surprised myself by how different it seemed coming to it as an adult, fifteen years later.
Michelle Magorian is one of those gifted authors who can write a novel which can be enjoyed by adults and children.  I can still as an adult appreciate this book in a way that I can’t any more with Jacqueline Wilson (I know that I end up picking on her fairly often but it’s only because I think that her writing has all the emotional depth of a puddle).  For similar reasons, my mother never allowed me to read Enid Blyton as a child; she felt that she had wasted her own childhood reading too many of these.  A good children’s writer can write books which adults will not resent having to read to their offspring – you might even learn something …

This is the first book which contained a romantic plot that I read without saying “Yuck” loudly at regular intervals.  The year before, I read Pride and Prejudice (aged ten) and when for Home Reading I had to read the proposal scene to my mother, I smoothly changed the plot by having Miss Elizabeth refuse Darcy the second time around again.  Still, I was being firmly steered towards the Young Adult shelf of my local library by the friendly staff which unfortunately contained a lot of books that were rather on those lines.  I remember picking up a Linda Newbery book though that contained an explicit sex scene which I came to in the middle of my Year Six Independent Reading Time.  I remember staring in horror at the words on the page and being convinced that all of my friends and the teacher would realise what kind of filth I was reading.  Then, very quietly, I closed the book, never to open it again.  It was fine, I had three other books on the desk to turn to instead.

Still, I finished A Little Love Song and remember it much more fondly.  To be fair, the Linda Newbery book also contained various passages which were sympathetic towards Irish terrorism, something which my sensitive ten year-old self found much more offensive than the sex so I think that that book had been on thin ice anyway.  I also read A Little Love Song during my summer holidays, in far greater privacy than Riddle Me This.  Still, by this point I was still only eleven and very highly strung – I had kissed precisely one boy in my whole life and even that had been more experimental than anything else.

This is another World War 2 story, Michelle Magorian frequently pitches her stories at around about this period and she is very good at capturing the mood and atmosphere without having to stop and lecture her readership.  I read Goodnight Mister Tom with my Year 6 class and they absolutely loved it, the film too.  Interestingly enough, A Little Love Song is set in the same universe as Goodnight Mister Tom, with the setting being the same Salmouth village where Tom takes Will and Zach on their holiday together.  These characters are not mentioned though – this is most likely for the best but there was a part of me who would have liked to hear that Will was doing all right, but then I suppose that that was made clear through the last line of the book.  It’s a tricky thing, recycling plot devices and can very easily seem artificial.  Within the first five pages though, I had stopped thinking about the cast from Goodnight Mister Tom and got on with the story.

The main character is Rose, who is 17, she is spending three months in Salmouth with her 21 year-old sister Diana.  Their father is dead, killed in action the previous year and their mother is abroad entertaining the forces, having employed a companion to supervise her unmarried daughters.  The drama kicks in though because the girls arrive at Salmouth to find that their companion has been called up.  They are on their own for an entire summer.  It is true that during the war, the social conventions surrounding ‘Respectable Behaviour’ did start to break down but it was interesting that Magorian felt that she had to make clear just how many things had to fall through to allow two young girls to spend a summer independently.

Rose is the ‘clever one’ of the family, the aspiring writer, but lives in shadow of her ‘pretty one’ sister who has her own problems.  And there are these two young men/boys living over the second-hand bookshop in the village.  Of course there are!  It can seem a little bit cliched at that point – voyage of self-discovery and fair amount of ‘I truly never was the same after that summer’ but there is a reason why you read those kind of books when you’re growing up – in and among, they can actually offer helpful advice when you’re going through similar-ish experiences.
Rose and Diana go to dances near the American base, they meet and befriend the young unmarried mother Dot. Like many of their real-life contemporaries, through the social upheavals of war, the boundaries of class and social convention are not so restrictive.  Diana had felt doomed to a life of spinsterdom but she finally meets someone who can see past her good looks to her inner self.  For Rose, things are predictably more complex.  She befriends 18 year-old Derry, whose older cousin Alec owns the bookshop.  The two of them are in their late teens and they enjoy playing with boats and Derry teaches Rose to swim.  As time passes, Rose gets to know Alec better too and he helps and encourages her with her writing.  But Alec has his own personal problems, suffering from shell shock post-Dunkirk and post-being-dumped-by-his-betrothed.

In the fifteen or so years since I first read this book, the next part or so is what stayed with me.  Derry explains to Rose that he is awaiting call up for the RAF and that being realistic he will probably die soon in action.  With this in mind, he wants her to sleep with him.  Forget the peer pressure of today – the possibility of certain death really raises the stakes … it is true that illegitimate births and extra-marital sex did skyrocket during the war years and this book, in a very PG way, does explain why.  Anyway, so Rose agrees to this reluctantly.  You know, so Derry won’t die a virgin.  I remembered the passage detailing their encounter as being long and drawn out and horrendous.  It does not go well at all.  Being eleven and having only a vague idea of the details, for the first time I read that sex could be very, very unpleasant with the wrong person.  However, when I came to that bit again this time – the whole thing is described and done in under five lines.  I found that fascinating in showing how my childhood brain processed that whole reading experience.  So, without ever judging Rose, Magorian does present a pretty good public health warning of why True Love Waits – because it can.  It’s just the hormone-driven little boys who want to push things before they’re ready.

The side story of the girls’ friend Dot is another good example, she had known her Jack since early childhood, known she had wanted to marry him from when she was twelve but had been banned by her father from marrying him.  Having gotten pregnant during one of his army leaves, she was left a social outcast when her parents kicked her out and she had no way of contacting him.  The part towards the end when Jack’s parents reclaimed her was really touching.  I liked this book in that the teenaged characters could have sex and while there were consequences to be dealt with, everybody was able to pick things up and keep going with their lives.  I remember reading an article about Judy Blume, who had explained that she wrote her book Forever because her own daughter had been tired of reading teen books where the girl loses her virginity to the wrong guy and then had to be punished for it, either through pregnancy or disease.  There are consequences.  Of course there would be consequences.  It is the wrong message to send to young girls though that they will be doomed to a life of sack cloth and ashes if they make one simple mistake.  Rose is ashamed of herself after sleeping with Derry, she is upset, she knows that it was a mistake and that he was not for her at all.  But then she gets over it and moves on.  Just like you would in real life.

The parallel story of ‘Mad Hilda’ was slightly clunkier, Rose reading the diaries which she found in the cottage she and her sister are living in.  Hilda is a woman who had a tragic love affair in the previous war, but for her it ended far more Biblically.  Magorian is very much covering her bases concerning the variety of outcomes of pre-marital sex; extreme discomfort, inconvenient pregnancy and social outcastdom, inconvenient pregnancy and involuntary commital … still, this is a young adult book, people do get their happy endings. The ‘twist’ (if you can call it a twist) seemed a bit forced in to me, I get that it was necessary to make Hilda fit the story but all the same, it took something from a novel which I had believed in up to that point.

The thing that I remember most of all about this book though was the moment when Rose finally realises that she likes being a girl, that she is more than the next-best-to-a-son she had cast herself as, that womanhood does not have to be endured that she ‘likes being female’.  I loved that this was realised as a shout to the heavens – I read this while I was dreading growing up.  Indeed, I was an awful teenager.  Not in the sense of being wild or unruly, just that I was really, really bad at being one.  I hated the way that my body was changing, that I suddenly couldn’t run around any more without it hurting (mammaries!), that I had this disgusting thing happen once a month.  It took me a long time to like being a girl – it was really good to read this book and see that other people had felt like me, and that they ultimately changed their mind.  If only for that moment of Rose’s triumph over her own insecurities, this book is worth championing.  But there is so much more to love in there than that.