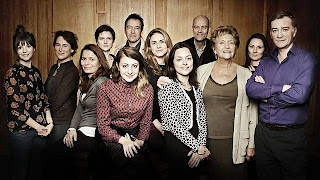 The Cazalet Chronicles are currently being serialised on Radio 4, which got me to thinking about how I had listed them in my top 10.  I had every intention of reviewing each of those in full but somehow time has rather got away from me … anyway, listening to them on the radio has made me remember quite why I loved them so much in the first place so I decided that since I appear to be having a lazy Saturday, why not write it down.  So here we are. 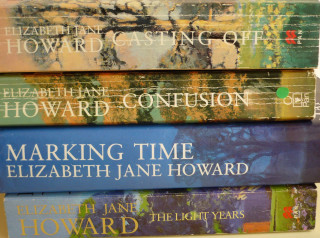 The Cazalet Chronicles are a quartet of novels; The Light Years, Marking Time, Confusion and Casting Off.  They tell the story of the eponymous Cazalet family of which there are many.  The elder generation, the parents, the Brig and the Duchy, their adult children and wives, Edward and Villy, Hugh and Sybil, Rupert and Zoe and then the ‘unmarried’ (lesbian) daughter Rachel and her ‘good friend’ Sid (Margot Sidney).  Then, the younger generation of children, they gradually grow to maturity over the course of the books.  It stretches from the idyllic pre-war days of summer holidays spent at Home Place with all the families together, into the beginning of the war as the eldest children begin lives of their own, then into the years immediately post-war as everybody deals with the fall-out of their choices.  Howard is an incredibly evocative writer, she creates this very believable world in the summer of 1938, this calm sunny world, then she shatters it over the following books.  It’s a masterpiece.

There was a BBC adaptation about ten years ago but it oddly enough stopped round about the end of Confusion so I ended up reading the last one first to find out about what became of them all.  Anyway, after that I ended up reading them all but strangely I ended up buying them all second hand.  I like second hand books but they are a bit deadly because you feel like you’re getting a bargain and so I often end up spending more than I planned.  I think what I always liked about these books was that they were the story of a middle-class family – upper-middle class of course, the Cazalet men have made their fortune through timber, so they are more wealthy than aristocratic.  Their values are recognisable, their lives are painted very vividly.

Within one family, there is a huge cast of characters, the blunt and faintly useless Brig, the wise Duchy, horrid Edward, tetchy Villy, nice Hugh, spoilt Zoe, vain Louise, insecure Clary, sweet Polly … they are all very vividly drawn.  This is unsurprising, I read Millions Like Us which included the story of Elizabeth Jane Howard’s youth – the books are rather heavily drawn from her own life, she is Louise.  Oddly, although Louise was at times a rather irritating character, I felt more for her after realising that, it takes real strength of character to acknowledge your own failings in writing as she does in writing Louise so unflinchingly.

I read a recent interview with Elizabeth Jane Howard in which she flatly describes her father (Edward by another name) as a ‘physical hero but a moral coward’, she allows Louise to still love him even after he has made advances towards her.  It is painfully obvious when Louise gets married that she is looking to be loved rather than because she loves her husband and it is only at the end of the novels when she leaves her husband that we finally begin to see Louise grow up.  I still remember the final section of the story which covered Louise’s point of view; having told her husband that their marriage is over and planned what she is going to do next, she stops and thinks of her baby son and acknowledges to herself that she will be atoning for Sebastian for the rest of her life.  Back in the real world, I once read Howard’s blunt confession that she knew that she and her daughter had had a bad start to their relationship and as the elder, she must accept full responsibility.  As an abandoned child myself, I have respect for Howard in her ability to apologise and do so convincingly.

With such a complex cast of characters, it would take too long to go into all of them, suffice it to say that there are a myriad of plots going on here as each character tries to navigate the chaos of the war years.  It’s odd though, I’ve read a lot of books set during the war period, both contemporary and modern and this series always seemed as though it had been written at the time.  Howard is gifted in being able to conjure up this time period so convincingly.  The other thing which I always loved is the way that everybody got what they deserved.  It can at times seem unbelievable in novels when good characters are rewarded and the baddies are punished but here, it seems entirely real – it is our choices that govern what will become of us.

I work in a school where we preach the Language of Choice – I am constantly saying “Think about your choices at this moment”, “I’m coming back in five minutes and then I expect good choices”, “That was a very bad choice as I think you know” and so on.  Yet increasingly, I see the wisdom of it.  We have to realise that we are making decisions at every step of our lives that will affect how our lives will turn out.  The heart-breaking story of Sybil and Hugh, two people who love each other dearly but still struggle to communicate – they never want to upset the other which becomes tragic when Sybil succumbs to cancer, reluctant to share her fears with her husband who in turn does not want to frighten her.  Still, at the end of the novels, Hugh is finding happiness again and has learnt from his mistakes because he is a Good Man.  Edward is at the mercy of his folly which has grown out of all control.

Most poignant for me though came at the end of Confusion when the usually blustering Brig privately admitted to himself that he was unlikely to live to learn Rupert’s ultimate fate, and that despite appearances, he minded desperately about this.  Another writer might have made this too sentimental, Howard has the sense to make this something personal to the Brig which he will not share with any other characters.  My favourite characters were Clary and Polly, trying to make sense of the adult world at round about the same time as I was trying to do this myself – it was striking how similar their lives seemed to be; sharing houses, making friends, trying to hold down jobs.  They are good cousins to each other and good friends, again their choices are ones which sometimes bring them pain but ultimately lead them back to happiness again because their Hearts are True.

Really, this a series about family love.  Even after the breakdown of her marriage to Edward, Villy is a recognised part of the family.  Edward flatly states to his mistress that they will not be invited to Hugh’s daughter’s wedding because Villy had been ‘awfully good to Sybil while she was dying and Hugh has never forgotten it’.  I loved the character of the Duchy who had discreet chats with people while tending her flowers and quietly laid down the law – she had sympathy for young Zoe, Rupert’s second wife while recognising her failings, she protected Villy from the worst of Edward’s indiscretions and she welcomed Sid, Rachel’s one true love, as a cherished member of the family.

I read that as well as the Radio 4 adaptation, this will also be the year when Howard finishes a fifth volume … I’m not sure quite what I think about that.  Certainly, there is more room for development, with such a large cast there always would be but I am still not sure if it’s the right move.  The final chapters were so perfect, everybody had what they deserved, the war was over.  Of course, Howard herself still had a very eventful life post-divorce, so perhaps the story of Louise is where the series will go next … presumably to have an affair with a celebrated author and marry him, then become a close friend/substitute mother figure to his sons … Hmm …  There’s no doubt that if another one comes out, I will be reading it.  This is the story of how the ties that bind will win out.