This book was described as a cross between I Capture the Castle and The Virgin Suicides and since I love both of those, I thought I’d best take a look.  This was an excellent decision.  Not only does it celebrate how great it is to be a reader, but also the nature of family and the ties that bind.  Major kudos to Eleanor Brown who took what could have been a very cheesy story (three lost sisters find the answers by returning home) and making it very, very funny with a lot of truth.
The weird sisters of the title are Rose, Bean and Cordy Andreas – otherwise known as Rosalind, Bianca and Cordelia, the three daughters of an English professor at Barnwell college.  Of course they could have had it worse, their friend was the daughter of a classicist and she’d been named Lysisastra, Lyssie for short.  As a very, very bookish family with a Shakespeare professor for a father, they have a tendency to communicate with the words of the Immortal Bard, so when Cordy receives a letter from Rose with the words “We met, we woo’d and made exchange of vow, I’ll tell thee as we pass; but this I pray, That though consent to marry us to-day“, she immediately knows that this means that Rose is getting married.  The second letter, from their father, with the words “Come, let us go; and pray to all the gods/ For our beloved mother in her pains” – and again, Cordy understands that this means that her mother has cancer.
Before I go into the plot, I just want to note that the writing in this novel was pitch-perfect throughout.  There are few novels that can carry off a first person plural narrator with ease and although I did read one review that moaned about it, that one sounded more like the rantings of a stupid person who didn’t get it than an actual criticism.  The three sisters united narrate the novel, merciless about each others’ flaws yet ultimately bound together unbreakably.  The tag line of this novel was ‘We love each other, we just don’t like each other much’ and while that may be true, particularly at the beginning, the family ties that bind us just can’t be gotten rid of.
The three sisters return home though not because of their mother’s illness but due to their own personal problems, although the cancer provides a decent cover story.  Cancer and particularly maternal cancer can be a bit of a tired plot device but speaking as someone whose mother has been through cancer, I thought that they did it well.  The maternal pronouncements were de-maudlinified and dealt more with a I’m-Your-Mother-And-I-Know-You level rather than a My-Dying-Wish-Is-… which is completely ok.  They also kept the treatments realistic rather than just making her a Bit Bald With Headscarf and Tired.
So, back to the story.  Rose is the eldest sister, she longs for order and control, she’s great with stain removal and first aid and is a Maths professor.  She also freaks out about the idea of moving to England with her fiancé and moves home claiming that her mother needs her support, although her sisters make it clear everyone would survive without her.  Rose runs around putting bookmarks in the many open books round the house to protect the spines, but without her, everybody copes just fine.  Rose needs to be needed.  Bean is the middle sister, she longs to be noticed and has managed to get herself into a merry mess by embezzling money from her employers to fund living in New York.  All the money has left her is many suitcases of clothes and a bunch of guys she’d far rather forget.  Caught out and fired, she uses the last of her ill gotten gains to buy a clapped out car to get back to the family home in Barnwell.  Cordy is the youngest sister, she never finished college and totally refused to be an adult and then spent eight years floating on the wind, now though she finds herself to be pregnant and realises that since she’s so broke that she actually had to shoplift the pregnancy test, she needs to Get Her Act Together.
The writing behind all this is brilliant, there are so many one-liners that really sum up what it’s like having relatives. Particularly how you can recognise the many different versions of a person that pop up over the course of a lifetime.  Rose, stressed out about her relationship, is being difficult to live with, her sisters note that it is ‘like living with an extraordinarily bossy thirteen year-old.  Again’.  But then there is also the passage recounting when Rose’s fiancé Jonathon first asked her out; it is narrated by her sisters despite them not being present and they are over the moon that he sees why it was that they loved Rose so much.  Your family will always cheer when something good happens for you whether or not they’re friends with you at the time.
Bean as a character I found most difficult to warm to.  She did such stupid things that were indefensible – adultery, theft, lying.  Yet still, she was the classic middle child and she was not a bad girl.  Her moments of breakdown did make me a wee bit weepy (this is not that hard, I am a notorious softie) but most of all I liked that she got a bit of a conversion experience.  The Hippie Vicar character seemed like he was going to be her Love Interest, but Bean really needed help on a deeper level on that and instead, he was her confessor.  It’s not often that mainstream fiction covers that kind of spiritual rebirth in a convincing fashion so well done to Brown again. 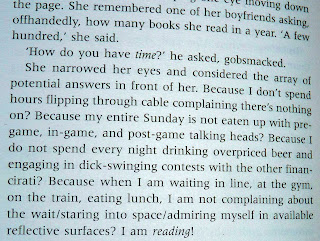 The moment I really warmed to Bean though was when she passionately defended her enjoyment of reading to her boyfriend.  Apparently somebody else liked it too –  they photographed the quote and put it on the internet so voila.  Her boyfriend wonders how she has time for reading and she points out that one hundred books a year is not so many when you cut out TV and make use of your waiting time.  As a heavy reader myself, I cannot but agree – reading is something that all too often others denounce as a waste of time but as hobbies go, it fits in just about anywhere.  Why is it so strange to enjoy reading?

Cordy was another character that I was ready to take against – it always irritates me when people act as if adulthood is optional.  I wasted the early part of my teenager years wanting to be a child, then I had another freak out dreading adulthood but then I just decided to enjoy the age I am and that works far better.  Certainly, for Cordy at 28 to be still unqualified and without a path does not seem like much of a billboard for Free Spirit Living.  Still, I liked Cordy at the end of it for the same reason that all the other characters liked her too – she’s a nice girl.  It is not surprising that Dan the Coffee Shop Guy falls for her so quickly, this is just of a piece with Cordy’s life – things fall into place.  There are times when this is infuriating for those who have to work hard to get to be where they want to be but it is not the fault of the lucky ones.

Cordy is the stereotypical Youngest Child, an unplanned one at that.  Rose and Bean loudly complain that she got away with murder and always got the best birthday presents and Cordy cheerfully agrees that both these things were true.  Still, the omniscient Sister Voice acknowledges that yes, Cordy got scolded less but it was rather that by the time Cordy was born their parents had run out of parental puff and never bothered to push her that hard.  Parents scold us when we’re little because They Care … of course when they’re scolding us when we’re older then they need to take a hike.

As well as celebrating the beneficial powers of being a reader, this book considers family ties.  The sisters remark that while much has been written about children of unhappy marriages, nothing has ever been said about how those of happy ones can be messed up.  Their father and mother have never spent a night apart, how are they supposed to live up to that kind of love?  Yet, as the Wise Vicar comments, we have to acknowledge that that which is our past is in fact the past so that we can move on and change our own story.  Really – we just need to take responsibility for our own mess, which is hard enough to do.  You can’t blame your family or your friends or your star sign or whatever else for your own mess – it was not Rose or Cordy’s fault that Bean felt she needed to steal money to make herself into an interesting person.  It was not Bean or Cordy’s fault that Rose felt that if she weren’t there to take care of things, they would all fall apart.  And it was not Rose or Bean’s fault that Cordy wasn’t pushed enough and just drifted through her life.

In this novel, her first, Brown takes a lot of what would otherwise be secondary school level psychology about sibling positions and weaves an engaging and interesting narrative about what it means to be in a family, specifically a family that loves books.  It’s no a shocker that I was a fan.