It is a fact universally acknowledged that where there has been success, there will be spin offs.  Whether these spin offs are worthy of the same degree of merit as their originals is an entirely different matter.  Jane Austen’s Pride and Prejudice has been subjected to far more of these than the average classic – there’s been the Bollywood Bride and Prejudice (so-so), then Pride and Prejudice and Zombies (oh no), Lost in Austen (pure awesome) and even the more run of the mill Mr Darcy’s Diary.  Indeed, there have been rather a few of the latter, I inadvertently bought one a few years back because the sales assistant had been super helpful and I felt guilty walking out the shop with no purchases.
It should therefore come as no surprise that someone has decided to write a murder mystery featuring the characters of Miss Jane Austen, it is perhaps more surprising that P D James has decided to give it a go, given that she is a well-established author in her own right.  But for every The Wide Sargasso Sea or Frasier, there are at least a hundred other spin offs which just flop on their face and I fear that this is exactly what this one has done.
The thing is, for it to be an effective or even an interesting story, the narrative would need to hold up on its own strengths, something which this story cannot do.  If you forget for a second that these characters have had a previous life in Pride and Prejudice, then this is just a very dull and poorly plotted murder mystery where none of the principal players in the actual mystery are ever allowed a voice.  There are plot holes you could drive a truck through and frankly I just did not care.  You wouldn’t need to have been an avid viewer of Cheers to enjoy Frasier and equally you could still find The Wide Sargasso Sea a haunting read without knowing the ins and outs of Jane Eyre but this novel has nothing to offer of its own.
This is unfortunate really given the heavy and plodding way in which P D James struggles to set out the previous action for the unfamiliar reader.  I do think she might have found a more organic way to do so than just spend the first chapter restating Pride and Prejudice with a middling degree of accuracy.  That bit really got on my nerves – if you’re going to write a book based on established source material and then expect the general public to pay good money for it then it just seems like a common courtesy to do your research so you don’t mess up the basic plot points.  Elizabeth did not refuse to dance with Darcy at the Netherfield ball, she did not refuse to receive her sister Lydia after her marriage, the Bingleys were perfectly prepared to receive Lydia and husband, Charlotte did not turn into a hag post-marriage.  And also and this one is just offensive to anybody who has ever read and loved Pride and Prejudice – why imply that Elizabeth Bennet was a gold-digger?
P D James muses through Elizabeth that she and Darcy had spent barely half an hour alone together before their marriage and ‘if it were a novel’ it would seem unrealistic.  Well, if (hypothetically of course, P D James) a novel was set in the early nineteenth century amongst respectable people then quite frankly no, not unrealistic at all.  Unchaperoned visits were not exactly de rigeur so Elizabeth and Darcy were not that unusual and particularly given that Pride and Prejudice was a novel based around misunderstanding then having the two romantic leads having nice long chats to get everything straightened out would have kind of killed the narrative.  And if Elizabeth had been a gold digger, she would have just married Mr Collins, the whole point was that she wanted to find love.  Her father cautions her against accepting Darcy because he does not believe she can respect him as her chosen partner in life and when she explains her feelings, he is satisfied.  P D James has not read it properly if she is trying to imply differently which is odd because she must be a fan to have decided to write this book in the first place, it’s like she’s trying to mess with the original plot and I don’t really understand why.

Elizabeth and Darcy were two remarkably lifeless characters during this novel.  Elizabeth frets about doing charity work and never seems to be convincingly happy and Darcy barely seems master of his own home, when at the end Elizabeth announces that she is pregnant again, I couldn’t help but wonder how.  The problem with stories such as Pride and Prejudice which are based on the marriage plot is that any continuation necessitates further complication and when two people have a hard time in getting together then as the reader/audience you really just want them to be happy.  Short of splitting them up, there’s not a whole lot for P D James to do and she clearly hasn’t thought of any ways of being inventive.  If she had been truly daring, perhaps one of the key players in Austen could have been involved in the crime, rather than merely mentioning people from Emma and Persuasion, why not involve Sir William Elliot who has form as a wrong ‘un – this story never feels as if it belongs to the Darcys.

I haven’t read any other P D James novels but I could see that she was trying to write in the style of Austen but it just came across as rather clunky.  A lot of the words she used did not fit for the era.  Elizabeth Darcy (nee Bennet) would not have said that she was ‘free’ to talk to Colonel Fitzwilliam, she would have been ‘at liberty’ to do so, Georgiana would not have called something ‘pointless’, she might have said it was ‘without purpose’. There’s a lot of it and it just sounded like discordant notes on a piano and equally irritating.  This might sound like nit-picking but when you’ve read historical fiction done as effortlessly as Flashman or Wolf Hall then it is worth noting.  Similarly, it seemed a bit out of place that when noting as a side bar that Wickham had been dismissed from the household of one Sir Walter Elliot that his ‘younger daughter Anne’ had made a happy and prosperous marriage – if the Pemberley people do not know these people, why would the degree of marital happiness of one of their children be of any interest?  As someone who has already read Persuasion, yes that’s nice to hear but let’s face it, I’d picked up on that anyway through having read it and there being a happy ending. 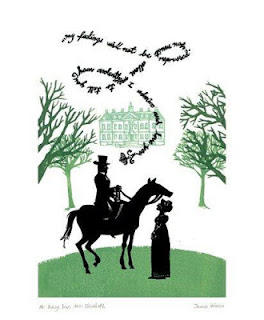 The mystery itself was a bit stupid, I was waiting for some kind of twist that would help it to make sense but it never did, so we were just left with what my grandmother would call a ‘knotless thread’.  The night before ‘Lady Anne’s ball’, a carriage rocks up in a storm with Mrs Lydia Wickham screaming that her husband has been murdered.  He hasn’t but his mate Denny has been and Wickham is found over the body saying that it is all his fault.  It kind of is but not really.  Cue lots of toing and froing but nobody who we actually know is involved in the action so it’s all a bit of a snooze.  I think that P D James tried to play around with the idea of with great wealth comes great responsibility, going on about Darcy’s great-grandfather who was the ‘family failure’ who went to live in the woods.  This was supposedly Darcy’s reason for behaving badly to Elizabeth as he did not want to be like said family failure and thought that he should have overcome ‘the attraction’ and remained true to the responsibilities associated with his bloodline.  But it wasn’t just an attraction!  Darcy loved Elizabeth!  In vain did he struggle and then he found that it would not do!  He was so overwhelmed by his love for her that he proposed and then rescued her sister from ruin and proposed again!  P D James, if you are going to write a murder mystery for Austen fans then why mess with the very pillars that we hold dear?

At the end of this book I was left feeling annoyed and as if I’d just read a book by someone who does not like Jane Austen.  There’s nothing wrong with that, Charlotte Bronte didn’t like Austen books either but I’m just a bit nonplussed by why P D James wrote this when she doesn’t seem to have quite understood what Austen was all about.  But then, given the way in which Austen was so against sensationalism as P D James noted herself in her preface and as any reader of Northanger Abbey would know anyway,  it is perhaps not surprising that trying to combine thriller and Austen has not really worked.  It is consistently clunky and inelegant, two qualities which could never be associated with Jane Austen.

Austen in August Review: Jane Austen Made Me Do It, Edited by Laurel Ann Nattress