So, today’s book is Room, this was another one that went viral about a year and a half ago.  I myself read it before all the hype; my Mum lent me it but refused to tell me anything about the plot and I am glad that she did.  Had I tried to read it a few months later though, things would have been very different because by then pretty much everybody knew what it was all about.  As it was, I read the first five pages or so and turned to my Mum and said, “It’s a Fritzl thing, isn’t it?”  And indeed it is.


The story is narrated by Jack, a five year old boy who lives in Room with his Ma.  To him, Room is the entire world and although they do have a TV, he knows that that is just pretend but that Room is real.  In the evenings, Ma hides him in a cupboard so that he cannot be seen by Old Nick, the wicked being who comes and brings food and then ‘squeaks the bed’.  It sounds horrific and indeed the circumstances are horrific but the reader is never invited into this deeper hell, simply the five year-old Jack’s understanding of it – this is his life and the only one he has ever known.


It is clear from the beginning that Jack is his mother’s life-line, raising her son and keeping him safe has kept her sanity intact and given her the will to survive.  She has crafted a world for Jack in their tiny Room, telling him stories of everything from fairy tale where all of the heroes are called Jack (& the Beanstalk, Gullijack, Prince Jack) to others that the reader can recognise, such as the sad tale of Princess Diana (Should have worn her seatbelt, Jack opines).  They do Phys. Ed by running around the Room, Arts and Crafts by collecting all their egg-shells to make a snake and every so often they play a game where they scream as loud as they possibly can in the hope that somebody can hear them.  Yet all the while, Jack has been told that these stories are not real. The Room is all that there is.  But not for much longer, Ma decides that the time has come to take action. 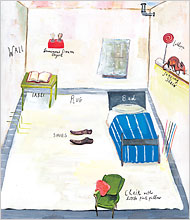 I thought that Donoghue presented Ma’s apparently sudden decision to try to escape  very reasonably.  Ma finds that now that Jack is five it is not only harder to hide the true nature of the Room and protect him from the danger of Old Nick but also it is more realistic that he will be able to help with an escape attempt.  Also, and this part I found very interesting, was the fact that Ma had picked up that Old Nick had been made unemployed and was in danger of losing his house to foreclosure, which meant that there was an increasing danger of him killing the two of them to hide the evidence of his crimes – so even the state of the economy factored into Room!  So Ma very patiently tries to explain to Jack a new story, of being nineteen and snatched by a stranger.  Jack cannot understand any of it.


I won’t go into the story of the escape, suffice to say that Jack and Ma do indeed escape from Room and enter a world which is as familiar to us as it is frightening for Jack.  Jack sees himself described on the news as a wild boy who is unable to communicate properly.  He has to wear a mask to cope with the new germs.  He is given a host of new relatives, most of whom see him as his father’s son rather than his Ma’s.  And he also has to learn to live without his mother for a few days when in a heartbreaking twist, she attempts suicide, clearly unable to cope with the trauma of Room.  The book ends with the two of them reunited, making a final visit to Room and then moving on to their new life, politely shutting the reader out as they leave.


This book has lots of strengths, I think that Donaghue was successful in her aim of portraying the power of the maternal bond – Ma’s love for Jack keeps him safe even though he is growing up in the worst of circumstances while simultaneously Ma is kept alive by her love for her son.  This love shuts out the horror of what is really happening and guides them through until they are back together once they are out in the world.  In that sense, Donaghue provided a real insight into the survival stories which have been in the news recently, such as Jaycee Duggard and Elizabeth Fritzl.  Room was the kind of read that stays with you afterwards, it was completely different to anything that I have read before and even the author herself admitted that had she just read the blurb then she would have no interest in reading any further but actually, I did not find it traumatic at all, just thought-provoking.


Weaknesses … Jack’s voice starts to jar a little bit when he’s out in the World post-escape with a lot of his observations sounding slightly forced and overly precocious coming from a five year-old.  It’s always the problem when dealing with a child narrator, but Jack’s world that was so intricately drawn in Room becomes a little stretched when forced to include a host of new characters and new places to experience.  It would always have been a difficult thing to pull off, going from extreme claustrophobia of Room and it is a minor criticism.  There were certain parts of the post-escape section which did really make me smile, like when Jack’s Grandma who has been uncertain about him laughs after Jack describes a shopping trip which he did not enjoy as ‘very interesting’, knowing that this was always his Ma’s way of politely indicating that she hadn’t liked something – you sense that from this point she sees that Jack is his own man and his mother’s son and nothing at all to do with Old Nick.


I wished that more had been made of the outsider perspective, Jack sees himself described on the news as semi-savage and the reporters claim that he cannot walk upright, we only have Jack’s point of view about himself and it is startling to think about the physical side-effects of such a life.  The main time this comes is when Jack’s Ma gives a TV interview a couple of days after their release fully laying bare their life – this was an event I really couldn’t believe, for someone recovering from a trauma it seemed completely ridiculous that their doctors would let them do that.  I know that many of the other  (for lack of a better term) dungeon survivors have given interviews and been paid very handsomely for it but they always did it months and months after their escape, not a couple of days later.  Anyway, the interview was interesting in seeing what the wider world made of them, and Ma was incensed to discover the world’s disgust was mainly that she still breast-fed Jack.  It was the exact same thing as The Slap, except the female author in this case skewers this view very accurately – having a female character nurse her child past babyhood  should not be used as a plot device to mark them as weird and here Ma is appalled that this is the weird detail on the case that has everyone thinking.  Still, inevitably, Ma does stop nursing Jack now that they have left Room.


So … it may seem as if I’ve done massive spoilers here but I don’t think this is really the kind of book where that matters since the point of the book is Jack’s voice and his experience of early childhood which is no less happy than any other child’s because of the power of his bond with his mother.  This is a very powerful statement for a book to try and make and it is broadly speaking successful.  So hats off to Emma Donaghue for a truly original story.  On a final note – I really, really hope nobody ever tries to make a film out of it.

Review: We Are All Completely Beside Ourselves, Karen Joy Fowler